The Calgary Flames dig a deeper hole in arena debate

'There’s a lot of places to make a lot of money in sports other than here,' said Ken King, the club's CEO. And that was the soft part of the sell. 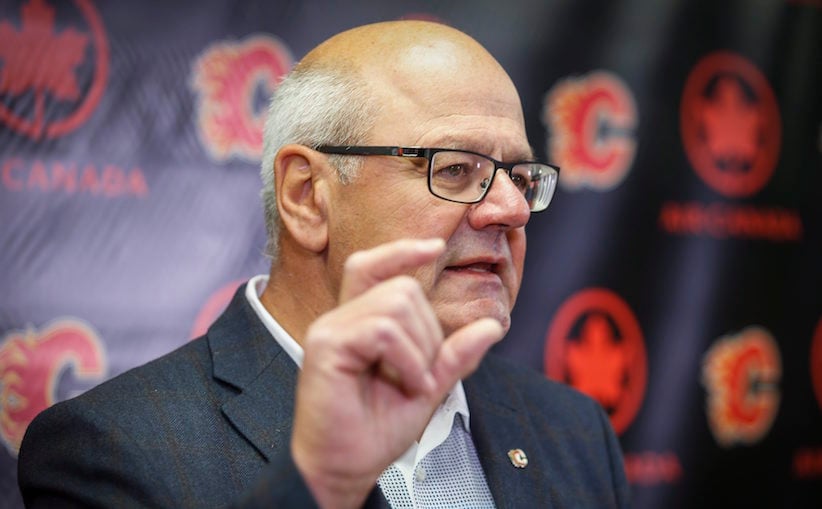 In the long battle of hearts and minds over how much taxpayer money should go into a pro-sports arena, Calgary Flames CEO Ken King and the club owners aren’t doing much to help themselves. They’ve set themselves on fire without prompting many people to react with concern, with their threat earlier this week to walk away from negotiations. And they brought along Gary Bettman, the league’s polarizing, strong-arming commissioner to bolster their arguments the city needed to kick in more money. It’s a bit like having Ted Nugent headline your folk festival.

Calgary city council and Mayor Naheed Nenshi responded Friday by revealing details of their financial proposal—$130 million in capital grants, $30 million in land and $25 million to tear down the Saddledome, 34 years old and soon to be the NHL’s oldest venue. The club’s owners would put up a matching $185 million, with the same amount coming from a ticket surcharge. In a different world, civic progressives and conservatives alike would be howling at Nenshi for offering $185 million to a for-profit organization’s revenue-generating arena. But here we are, in a place where Nenshi can bill this position as the fiscally responsible stance by comparison, ahead of a mayoral election Oct. 16.

Perhaps that’s the one victory Flames owners can claim this week: that some substantial, up-front payment from taxpayers now seems a given. King, however, proceeded to weaken his cause by lamenting the city’s investment as somehow paltry. Then, in his response on Friday to Nenshi’s pitch, he kept digging. A survey of his talking points:

The munificent owners defence: The owners’ group of five oil sector executives includes two billionaires, Murray Edwards and Clay Riddell. As newspaper comment sections and talk lines fired up asking why the big moguls can’t pay for the arena themselves, their ownership group’s CEO bid to remind the public how grateful it should be:

“We want to ensure that the public knows that the five men and their families,” King began in a news conference, “who helped build this city, who employ tens of thousands of people, have provided hundreds of millions of dollars in philanthropy, and in spite of no good financial sense, have and will strive to keep professional and amateur sports as a beneficial and valuable part of our culture… this this is no money grab. If it was, we’d be long gone. There’s a lot of places to make a lot of money in sports other than here.”

The ask, and the odd insistence: King will release the Flames’ owners financing pitch next week, but told the Calgary Herald he’s asking for 52 per cent from civic coffers, or north of $250 million. That’s similar to what King was demanding from the city on an earlier proposal for an arena and pro football stadium west of downtown. But in that deal, the city reaped use of the covered stadium most of the year as an amateur sports complex. The standalone arena has no such benefit—though King invoked Colosseum of Rome in reasoning the city needed such a large gathering space, hinting again at the owners’ generosity: “We are actually putting money into this process. We are not asking the city to give us money. This is a piece of public infrastructure.”

Stuck on the glory of Edmonton’s arena deal: King insisted Friday that the Edmonton Oilers only got a new arena, Rogers Place, based on the solidity of the heavily subsidized deal they got, and said the Flames deal will only work along the same lines. Edmonton, however, agreed to its terms in oil price’s headier days, and was enchanted by the idea the complex would turn around a stagnant downtown. Neither condition exists in the Calgary of 2017; the city’s core has already filled in the vast majority of what used to be surface parking lots.

Stuck on CalgaryNext, the plan that failed: “It was attacked and it was ridiculed. It was brilliant and it was very, very complicated,” King said of the 2015 arena-stadium proposal. City council was not only cool to the financing deal, but also was resistant to kicking into action a redevelopment plan that would require hundreds of millions worth of road redesign and contaminated soil cleanup.

Ticket-tax dollars should be considered Flames’ dollars: The city’s idea of one-third/one-third/one-third doesn’t wash with King, because he insists any ticket revenue or surcharge should be considered part of the organization’s contribution. In Edmonton, the deal King so idealizes, a city bylaw imposes the ticket surcharge and almost nobody there regards the ticket tax as part of the owners’ ante.

Do Flames fans and arena concertgoers wish to have their surcharge be seen as a public contribution to the arena, or the hockey club owners’ segment?

Depends on what you consider “payment”: Nenshi, in describing the city proposal, said taxpayers would ultimately recover money from the hockey organization’s property taxes. King decries the idea of having to pay the city property taxes–the Saddledome is a city-owned facility, and the team’s “rent” goes to amateur sports through the Saddledome Foundation.

On Friday, though, King said the Flames’ pitch will feature a “substantial payback” for the city, and minutes later revealed it: higher property taxes to reap from a bonanza of development around the facility, the likes of which never cropped up in three decades of the Saddledome’s existence. Calgary civic officials doubt there’s that sort of upside in the area, at least, not any as sure as the prospect of taxes on a brand new, revenue-generating hockey arena.

The real estate game: In Edmonton, owner Daryl Katz’ downtown arena pitch was quickly revealed to be a major land play—his ownership group has been doing much of the development in the arena district. King noted that the Flames group has a development partner involved in its arena ambitions.

And while the city is suffering an extreme surplus of office space downtown, and a 27.7 per cent vacancy rate, King let slip that he fancies more office space in his future Calgary arena neighbourhood: “By the way I think there probably will be an office tower. I have somebody who wants to build one here,” he told reporters. “But god forbid, we have empty office towers down there, so we’ll exacerbate the problem—I probably slipped in saying that. Wasn’t a planned slip; I can mess up on my own.”

His best idea seemed to come from a media question: King hinted at one move next week that could turn the dial in the Flames’ favour. He’ll likely release the design concept for the arena, something “innovative” yet cost-effective–“such a cool concept,” the CEO says. For now, the city’s taxpayers have been pushing back against the notion of a new arena; some attractive architectural mock-ups may stoke more willingness to pay. He only put this forward when asked if the public could actually see the building the Flames wished to erect. “I think that’s a great idea,” King replied, then seemed to mull the possibility as his answer continued. “Yeah, I think it’s probably getting to be time, frankly.”

To be sure, Nenshi didn’t give a master class in negotiating tactics, either: at one point in his news conference, he mused about the alternative of hosting 2026 Olympics hockey games in out-of-town, or even out-of-province arenas. This despite Calgary’s city manager urging council not to air negotiating stances in public, lest it put a chill on future talks with civic unions, land developers and other groups council deals with–including, say, the International Olympic Committee.

King and the Flames owners don’t need to be popular, the way politicians do; they need to ice a good team and keep attracting ticket-paying partisans. They seem to genuinely want fans to believe in the concept of an arena built mainly through public subsidy, and might yet persuade them. But the team is likely further from that goal now than it was before this week.