The changing face of Canadian immigration in one chart 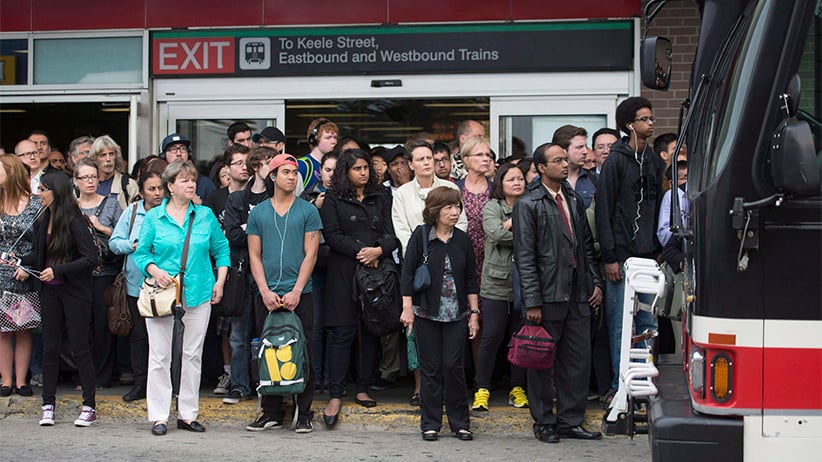 Crowds of people line up at Keele Station in Toronto. (Hannah Yoon/CP)

On Wednesday, the Pew Research Centre in the U.S. published an interactive tool that tracks the makeup of immigrant populations around the world using data from the United Nations Population Centre. While the accompanying article mostly focused on the flow of immigrants into America—the country is home to the largest number of immigrants in the world, with 46.6 million people living in the U.S. who were not born there—the tool also offers an opportunity to see the dramatic transformation of Canada’s own immigrant population over just the last 25 years.

Drawing on the Pew Research tool, here are the 10 largest immigrant populations in Canada as of 2015, and how their numbers looked in 1990, 2000 and 2010. Note, the graph doesn’t show the annual number of immigrants to Canada in those years, but instead is a snapshot of the total number of people from each country at those times.

(For best results on mobile, view in landscape mode.)

The graph drives home how the face of Canada has shifted over such a relatively short period of time. The growth in the number of immigrants from China, India and the Philippines has been remarkable, with the number of immigrants from China in particular jumping from 170,000 to 710,000 over that time. As for Pakistan, the birthplace of what is now Canada’s 10th largest immigrant population, it wasn’t even in the top 30 of source countries to Canada in 1990.

The flip side of this is a stagnation or outright decline in the number of people who hailed from Europe. As recently as 2000 people born in the U.K. still made up Canada’s single-largest immigrant group. But these groups largely came in much earlier waves of immigration, and old age is reducing their count without a large influx of new immigrants to replace them. (See Italy.) In fact, several countries that had been among the top 10 sources of immigrants to Canada in 1990 didn’t make the cut a decade later—Poland, Portugal and the Netherlands.

It’s also worth noting that while the U.S. may be home to the world’s largest immigrant population (slightly more than one-quarter of which is from Mexico), immigrants make up a smaller share of the total population—around 14 per cent—than in other developed nations. Of G20 nations, Canada ranks third in that measure, with immigrants accounting for 22 per cent of the population. (It was 15.6 per cent in 1990.) Saudi Arabia is tops, at 32 per cent, while Australia is second at 28 per cent.

At the far other end of the spectrum, immigrants make up a tiny fraction of the populations in many Asian G20 countries—only 1.6 per cent in Japan and an insignificant 0.07 per cent in China—which will constrain economic growth as their populations age.

One final note on the economic front. There’s no question the influx of new people to Canada has helped offset the impact on growth from aging Baby Boomers leaving the workforce. But even with Prime Minister Justin Trudeau’s vow in March to increase the number of immigrants Canada takes in each year, it simply won’t be enough to plug the demographic gap heading our way.

Further to last RT of @davidakin here’s the extra ~38,000 immigrants atop intake for 2014, by age. In red. Squint. pic.twitter.com/dYme95bJiK