The dark side of Canada's coronavirus response 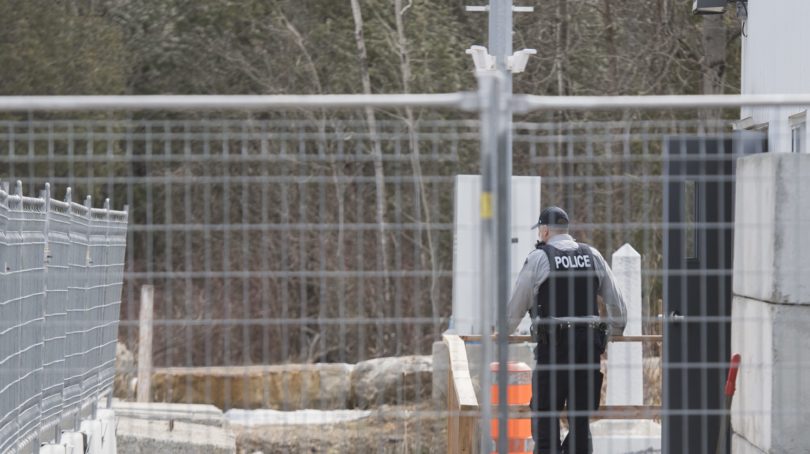 A member of the RCMP looks out towards the United States from an irregular border crossing at Roxham Road, near Hemmingford, Que., on March 19, 2020 (Graham Hughes/THE CANADIAN PRESS IMAGES)

These are, as Ottawa keeps reminding us, extraordinary times. And extraordinary action must be taken to contain COVID-19 and avert this global pandemic getting worse. But the federal government is decidedly not taking extraordinary measures when it comes to some of those who are most vulnerable to the deadly virus.

On Friday morning, news broke that a prison guard at the Toronto South Detention Centre, which houses provincial inmates and those awaiting a court hearing, had tested positive for COVID-19. That should have provoked some extraordinary action.

Prisons are incredibly busy places—inmates are admitted and released, while a litany of support staff and guards come-and-go every day. They are also, generally, crowded, poorly-kept, and lack essential health services. They are incredibly at-risk for infectious diseases.

That risk has pushed officials in New York, Los Angeles and Cleveland to take the most effective action to reduce the possibility of outbreaks in their prisons: Releasing inmates who are incarcerated on non-violent offences, or who are low-risk at re-offending.

Italy is evidence of what happens when those risks aren’t addressed. Amid fears of COVID-19, prison riots broke out, leaving six dead and inmates spilling out of the prison walls.

READ MORE: How Americans underestimate the threat of the coronavirus

The Canadian Civil Liberties Association has called on Ottawa to “to put public health ahead of fear” and immediately stop incarcerating those who pose little risk to the public, and release low-risk inmates who are elderly or immunocompromised.

Despite this, Canada has no intention of releasing inmates. Asked on Friday morning, Prime Minister Justin Trudeau insisted “we understand the heightened risk in those institutions,” but said only that he would “take measures to keep our incarcerated population safe.” He did not answer a question about releasing non-violent and low-risk offenders.

Those measures have, seemingly, involved depriving prisoners of their limited chance to leave their cells. Ottawa lawyer Michael Spratt told me that one of his clients was given an extra bottle of disinfectant spray as a vanguard against the virus.

“Most of the jail population has been locked down in their cells for prolonged periods of time—sometimes three to a cell,” he says. Staffing is an issue, and inmates in some cases have not been allowed to video conference with their lawyers.

Simon Cheung, with Prisoners’ Legal Services in B.C., reported that conditions haven’t substantially changed at the Kent Institution, near Vancouver. A floor flooded last week, since then prisons have been in virtual lockdown. The water was only half drained, Cheung says. Two days after the flooding, prisoners were given just 15 minutes out of their cell. “They had to choose between mopping up the water and taking a shower,” Cheung says. Prisoners report that the jail is absolutely filthy and strewn with garbage.

Spratt says, in the absence of leadership from the politicians, Crown attorneys have been finding “creative solutions,” like agreeing to postpone cases until the summer while releasing the accused to house arrest. He says the Crown has been more receptive to probation over jail time, as well.

At the same press conference, Trudeau announced plans to close the border to all irregular migrants, turning them over to American authorities.

This, just a day after Acting Deputy Homeland Security Secretary Ken Cuccinelli told Fox News that immigration enforcement would continue during the pandemic. Immigration and Customs Enforcement (ICE), the American agency responsible for arresting and deporting non-citizens, has also announced that arrest of undocumented migrants would slow, but not stop entirely.

For years, Trudeau has resisted pressure to send back asylum seekers who cross at irregular points of entry, especially those coming over at Roxham Road, in Quebec. The migrants have crossed have been arrested by the RCMP, taken to detention facilities, and given a chance to file refugee claims—roughly half of those who have had their claims finalized in recent years have had their refugee claims approved.

Since the outbreak of COVID-19, there have been unfounded fears stoked that those migrants could carry the virus across the border. It’s led Conservative Party leadership contenders Peter MacKay and Erin O’Toole to call for a crack down on the border. Quebec Premier François Legault also took aim at the border crossers this week. “It’s unacceptable that these asylum seekers are able to come into our country via Roham Road without being placed in isolation,” he said at a press conference.

On Thursday, federal ministers, promising that there would be no squabbling about jurisdiction, promised to isolate the border-crossers for 14 days in federal facilities.

That story changed quickly, as Trudeau announced Friday morning that Canadian authorities would arrest everyone crossing at Roxham Road and hand them over to American authorities.

“Someone who comes to the border to request asylum will be turned back to American authorities,” Trudeau said Friday.

At a second press conference an hour later, Public Safety Minister Bill Blair clarified, saying that “in the overwhelming majority of circumstances, they won’t be detained, they’ll simply be returned back to the United States.” Only in cases where the would-be border-jumper is a dangerous criminal would they be detained, he said. There would be an exception as well for unaccompanied minors who have “American nationality,” Blair said.

A statement from his spokesperson, Mary-Liz Power, confirmed Friday evening that any border-crosser “will be arrested by the RCMP, brought to CBSA for processing, and returned to [Customs and Border Protection] in the United States.”

Full details about the plan had not been released as of Friday night, just hours before the measures were scheduled to take effect.

It is still not clear whether Canada has received assurances from Washington that returned travellers will not, in fact, be detained. Trudeau said only that “we also have ensured that we are comfortable with this process as being in line with canada’s values on the treatment of refugees and vulnerable people”

A request for comment to Homeland Security went unanswered.

It’s also not clear whether this is, strictly speaking, legal. Canada has an international obligation to allow refugee applicants to make their case. Ottawa has long contended that its safe third country agreement, which holds that asylum seekers should make an application in the first ‘safe’ country they arrive in, gives it the authority to return migrants to the United States. Even still, Canada has continued to hear asylum seekers’ cases despite that agreement.

Amnesty International Canada was apoplectic at the news. Alex Neve, secretary general of the NGO, called it an “unexpected and shocking reversal.” In a release, Neve said that the decision means Canada is “violating our important international obligations to refugees, at a time when concern about their vulnerability to COVID-19 mounts worldwide. Canada is better than this.”

ICE facilities have been consistently slammed by civil liberties groups as being little more than warehouses with cages. Migrants are packed into these facilities, and often lack access to even soap. Staff in at least one ICE facility, in New Jersey, have tested positive for COVID-19.

While many of the border-crossers crossing at Roxham Road may have status in America, by way of a tourist or work visa, that does not guarantee them permanent residence, or a successful refugee claim. Indeed, more than 12,000 claimants have successfully been given refugee status in Canada since early 2017.

Washington, meanwhile, has rejected a huge number of those claims, and the Trump administration has enacted harsh new rules designed to bar many migrants already in the country from filing asylum claims altogether.

Blair says the number of new border-crossers has declined significantly, from an average of about 45 to 50 people per day down to 17 on Thursday. The minister continued that “there is no evidence that they are a higher health risk.”

Neither Trudeau, nor Deputy Prime Minister Chrystia Freeland, nor Blair could convey what, exactly, changed between Wednesday, when Ottawa announced it would shut the American border to non-essential travel but continue bringing in irregular border crossers as before, and Friday when the new policy was enacted.

Detaining people in tight quarters, crammed into cells, in unsanitary conditions, with a lack of health care is no way to fight a pandemic.