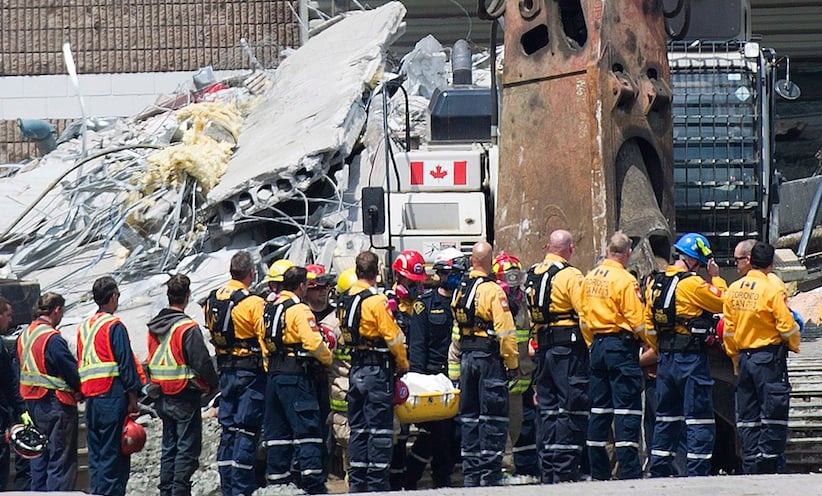 More than four years after the roof came crashing down at a shopping mall in Elliot Lake, Ont.—killing two, injuring many others, and triggering a multi-million-dollar public inquiry that assigned a whole lot of blame to a long list of people—a trial has finally begun for the only person facing criminal charges in connection with the deadly collapse.

Robert G.H. Wood, a former engineer who declared the Algo Centre’s rusty rooftop beams “structurally sound” just 10 weeks before the parking deck caved in, pleaded not guilty Tuesday morning to two counts of criminal negligence causing death and one count of criminal negligence causing bodily harm. Now 67, Wood faces the possibility of life in prison if convicted. He is standing trial in his home city of Sault Ste. Marie, a two-hour drive from Elliot Lake.

Two women perished in the partial collapse—Doloris Perizzolo, 74, and Lucie Aylwin, 37—and as the public inquiry concluded in 2014, the cause of the failure was clear: a rooftop parking deck that was never properly waterproofed allowed three decades of salty slush and rain to leak into the building, eating away at the welded connections holding the structural steel beams in place. By the afternoon of June 23, 2012, one of those connections was so badly corroded that it simply couldn’t hold any longer.

But as the inquiry also concluded, “the real story behind the collapse is one of human, not material, failure.” Greedy owners who refused to pay for proper repairs. Inept city officials who turned a blind eye to the mall’s dangerously deteriorating condition. Engineer after engineer who inspected the structure, yet neglected to spell out what could happen if the leaks weren’t fixed. “It is difficult to resist the conclusion that, if any one of the owners, engineers, or officials who were involved with the Mall over its 33 years of existence had insisted, ‘Enough—this building will fail if it isn’t fixed,’ two lives would not have been senselessly and tragically lost,” the commission concluded.

Parallel to the public inquiry, the Ontario Provincial Police conducted its own investigation, concluding that Wood’s specific behaviour was not only negligent, but criminally negligent. In other words, no reasonable inspector should have looked at those rusted steel beams—mere weeks from disaster—and concluded that everything was fine.

“Robert Wood showed wanton and reckless disregard for the lives and safety of other persons, and thereby caused the death of Lucie Aylwin and Doloris Perizzolo,” said co-prosecutor Marc Huneault, in his opening address to Superior Court Justice Edward Gareau. (Wood is being tried by judge alone.)

Although the specifics of the Crown’s case will emerge in court in the weeks to come, much of Wood’s alleged negligence was already laid bare during testimony at the public inquiry. Among the key facts:

• In October 2009, Wood was hired by the mall’s owner, Bob Nazarian, to conduct an inspection after the city’s building department expressed structural concerns linked to the leaks. In his subsequent report, Wood noted “severe areas of leakage” but found “no visual structural concerns.” A former mall employee, Dmitri Yakimov, told the inquiry he made a point of escorting Wood to the rooftop parking lot to warn him about strange “vibrations” in the concrete directly over the lottery kiosk—the same section that would later fail. “I didn’t consider it a concern,” Wood testified at the inquiry. “I didn’t see anything that was out of the ordinary when we were standing there.”

• Ron McCowan, a real estate investor who was considering purchasing the mall, read Wood’s 2009 inspection report and phoned him to talk about the state of the roof. Wood told him, he says, that the ceiling would “cave in” without an immediate $1.5-million reinforcement. Wood denies ever saying such a thing.

• By 2012, Nazarian was looking to remortgage the property and once again hired Wood to conduct an inspection. By then, Wood’s engineering licence had been revoked, punishment for the “professional misconduct” he displayed on another unrelated project. During that now-infamous inspection on April 12, 2012, Wood concluded that the beams holding up the roof deck were “still structurally sound.” He was at the mall for less than six hours that day, and conducted only a visual inspection. A team of forensic engineers who examined the mall post-collapse was shocked by Wood’s conclusion. “The observed evidence of extensive severe to very severe corrosion in the structural steel of the roof parking level framing contradicts such a statement completely,” they wrote. Paul Bélanger, the retired judge who presided over the inquiry, was even more blunt: “His work provided unfounded assurances that gave the Mall owner a documented excuse to continue doing nothing. His reviews were similar to those of a mechanic who, while inspecting a car with a cracked engine block, pronounces the vehicle sound because of its good paint job.”

• After Wood completed his 2012 report, Nazarian asked him to remove two unflattering photographs: one showing a yellow drip tarp hanging from the ceiling in Zellers, the other a badly rusted beam. Nazarian also requested some edits to the written portion, including changing “ongoing leakage” to just “leakage.” Wood agreed. In yet another post-collapse report, the Ontario Ministry of Labour concluded that by complying with Nazarian’s request, Wood “gave a false report on the mall’s condition.”

Day 1 of Wood’s criminal trial proved to be a short one. After the Crown’s brief opening statement, Justice Gareau adjourned proceedings until Wednesday morning so Wood and his lawyer, Robert MacRae, could review some newly arrived disclosure. Free on bail pending the outcome of the trial, Wood left the courthouse with his wife.

Watching the brief proceedings from the courtroom gallery was Rejean Aylwin, Lucie Aylwin’s still-grieving father. He drove three hours from Sudbury to see the next phase of what he describes as an endless process. “You can’t get closure because you don’t know the final answer,” he says. “What will the turnout be?”

A retired miner who lived and worked in Elliot Lake for more than two decades, Aylwin agrees with many others in town: that Wood is certainly not the only culprit who should be staring at possible jail time. “He is not the only one responsible,” he says. “A lot of people are responsible.”

Aylwin does believe that Wood should be sent to prison—“He deserves to be punished,” he says—but what he really craves is a chance to talk, man to man, with the person whose alleged negligence killed his daughter. “What I want to say to him is personal,” he says. “I’ll say it when I see him. I hope I get that chance.”