The falling tides in Portapique

Stephen Maher: Coming together in grief has been hard in the small Nova Scotia community. It's a place where fortunes have been falling for decades. 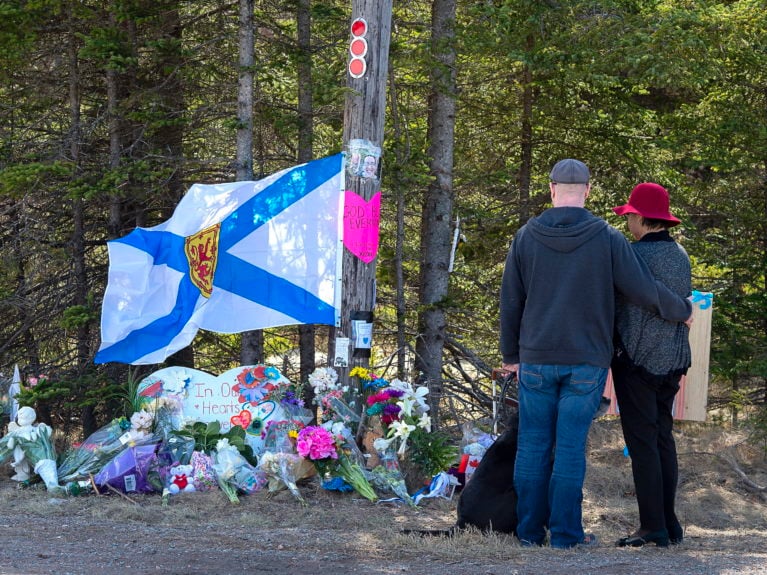 A couple pays their respects at a roadside memorial in Portapique, N.S., on April 22, 2020 (CP/Andrew Vaughan)

People used to dance late into the night on Portapique Beach Road, a stone’s throw from the houses where 13 people were murdered on the night of April 18.

Families drove in from far and wide to listen to a band fronted by fiddler Carl Elliott, a highly regarded player whose songs are still played wherever bluegrass pickers gather.

Elliott played his last gig in the Portapique Dance Hall in October 1975, because soon after the tide carried away the building. It was the second dance hall on the road, built while the first one was still standing, according to Dick Akerman, 85, who lived in nearby Great Village as a boy.

“When they knew the one on the extreme water side was going to go, they built a second one behind it.”

There was once a busy wharf in Portapique. Rum runners landed liquor there during Prohibition, and shad fishermen tied up their boats until that fishery died out.

There were wharves in Great Village, in Bass River, all along the shore, where locals once built tall ships that sailed the oceans of the world. “Tides eventually took all of those wharves out,” Akerman recalls.

The tides at the head of the Bay of Fundy are the highest in the world, with a daily vertical rise of 13 metres. Twice a day, the brown sea rushes in, so fast that you have to step lively at the water’s edge if you want to keep your feet dry. When the bay empties out, it leaves kilometres of mud flats bare at low tide, usually empty but for the odd clam digger.

READ MORE: In memory of Emily Tuck, the young fiddler from Portapique

The dynamic of Cobequid Bay is such that no wharf can stand for long, and nothing built near the water—like a dance hall, for instance—can be sure to last.

It feels like the tide has been falling along the shore for a long time. 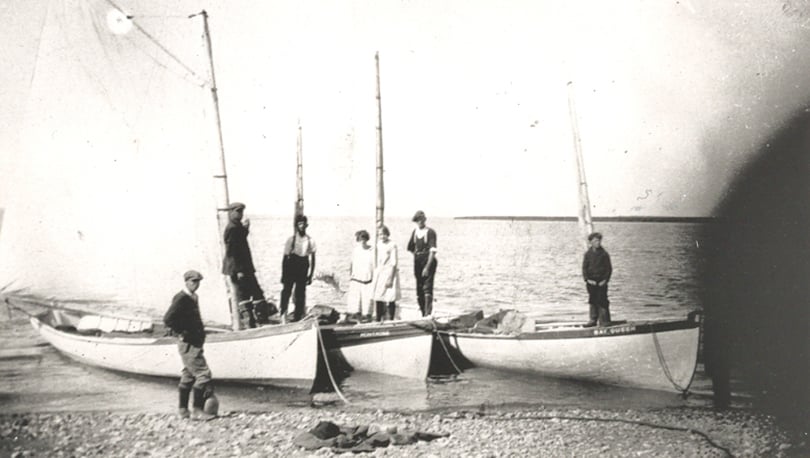 There used to be dairy farms, lumber mills, a fishery, a shipbuilding industry, a chair factory in Bass River and a bustling port at Great Village, where life was timed to the rhythm of the tide. Since the Second World War, though, the area has been in steady decline.

“As a community, it’s not much of a community anymore,” says Joy Laking, a celebrated watercolour artist who has lived in Portapique since 1972. “As soon as you take away the school and the church and close the little store … Once those things are gone, there’s no real way for the community to come together.”

When Laking spoke, she still wasn’t sure of the fate of some friends, who were later declared dead. Like everyone, she was struggling to come to grips with the tragedy of the sudden violence in a place so peaceful that nobody locks their doors.

She is afraid that the name of her community will be synonymous with a crime. “We certainly don’t want to be known for a big murder when we have so much beauty and kindness.”

Media reports on the crime, which took 22 lives across Nova Scotia, often refer to the communities as tight-knit, but people who live there say that is not true, not anymore.

“It’s not a community,” said one longtime resident of Great Village, who didn’t want her name used. “It’s just a bunch of houses.”

As young people have left, in search of better economic opportunities in Truro, Halifax or points west, they have been replaced by summer residents, like the killer, attracted by the opportunity to own a seaside home for less than $200,000.

“It’s been a slow dwindling,” says Serena Lewis, a grief counsellor who lives in Great Village. Her father recalls when there were 11 gas stations on the road from Great Village to Parrsboro. Now there is just one. As the gas stations, churches and stores closed, people grew apart.

“There is not really a sense of community at all,” she says. “I’m struggling to stay living here just because it’s so isolated. There’s such a disconnect. Other parts of the province have thrived but we’ve never bounced back. That’s why I’m worried for this community.”

Lewis’s son is looking to buy or build a home in the area, but she is not sure he should.

Lewis, who is herself grieving friends lost in the crime, has been working flat out, trying to help the community recover from the terrible event, which has been difficult for caregivers because of public health restrictions.

“These people were robbed of a good death, and now they’ve also been robbed of us being able to grieve, to come together and celebrate who they were in our lives,” she says. “How do we really bring their legacy to life?”

Pastor Steve Adams, of the Faith Baptist Church in Great Village, has been terribly frustrated to find himself struggling to comfort grieving parishioners without being able to see them, but has watched something positive happen online.

“If you go back to before the days of social media, communities were very involved,” he says. “If I went through a tragedy, there were people around me comforting me. Now, it’s the exact opposite. You could be in Ottawa and you could be providing just as much comfort as me living down the road. It’s kind of a weird thing, right? We’ve been talking for years about the global village and that’s a wonderful thing.”

Because of COVID-19 restrictions, people are stuck alone in their homes, suffering in isolation, but the online connection has helped, says Rena Kossatz, an actor who lives in Portapique.

“As isolated and alone as we are here at the edge of the woods, I am receiving messages of love and condolence from everywhere in the world, and their kindness and caring is helping to ease my sadness in the moments when we share thoughts and express feelings. I know it meets a need and fills a space for me.”

Tory Phinney, in Bass River, helped organize the online musical vigil that broke hearts across Canada when Natalie MacMaster played along with a recording of Emily Tuck, the 17-year-old Portapique girl who died with her parents.

Phinney says the expression of sympathy from far and wide has been deeply meaningful. “There’s people from everywhere saying, ‘We’re with you. We’re with you. Condolences.’

Locals were deeply moved by the online images that people spontaneously shared of lighted candles in their windows.

“That means a lot to someone who can’t be in that church or be in that community hall with their friends and family,” Phinney says. “I think that’s so vital for a tragedy of this magnitude”

Sue Mercer, a clinical social worker who works with the Mental Health Commission, says the expressions of condolences are also helpful for the people who make them, especially children.

“For the children out there that are impacted by that, you know, parents, if they can help the child write a note to that family, or do a card or make a video, something that makes it tangible, to acknowledge that this is a loss that they’re seeing, and help them move to the next step of saying goodbye.”

The community is just beginning to deal with the grief, a process that will take a long time. Funerals have been postponed, which means people risk getting stuck in their grieving process, facing the vastness of their loss alone. The people left to grieve and mourn will need mental-health support for many years.

“We also know the media’s going to go away,” says Lewis. “And I also know that this is not an affluent part of the province. And I know these people don’t have a lot of voice. And that’s where I’m very passionate that we have got to collaborate together for the long haul to help people come through this.”