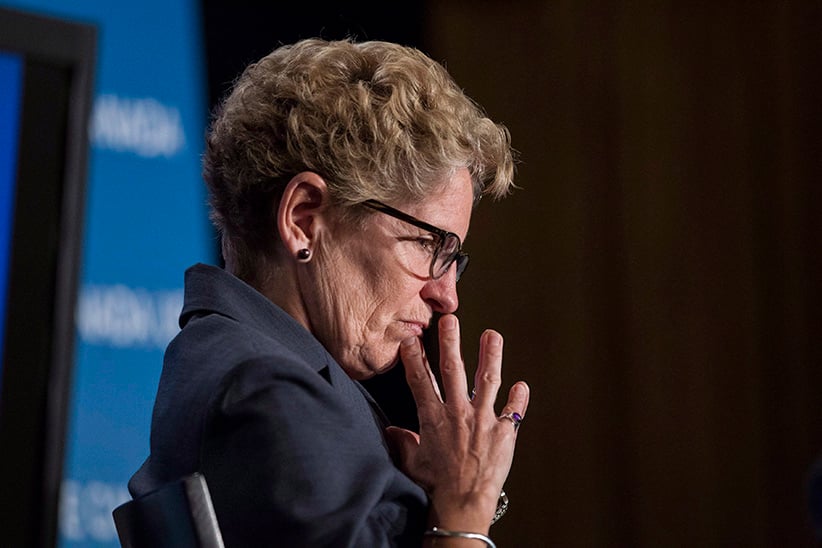 To err might be human, but to admit a mistake is anathema to politicians. So props to Kathleen Wynne for her “my-bad” moment on soaring electricity prices—however calibrated it was in its vagueness.

“People have told me that they’ve had to choose between paying the electricity bill and buying food or paying rent,” the Ontario premier told her fellow Liberals over the weekend. “That is unacceptable to me. It is unacceptable that people in Ontario are facing that choice. Our government made a mistake. It was my mistake.”

This expression of unreserved contrition is, of course, a desperate measure. The Liberals have at long last identified skyrocketing power bills as an extreme electoral hazard—one of those rare issues with both substantive and symbolic resonance that drags down an incumbent government over the course of a campaign. Whether a renter or a homeowner, every adult Ontarian feels soaring power rates in their pocketbooks to some degree. More importantly, they understand them as an outcome of this government’s preoccupations, which is to say, its pursuit of renewable energy alternatives seemingly at any cost.

Wynne left open the question of exactly where she and her government went wrong. Better to confess a spot of temporary blindness, or even callousness, than acknowledge the cornerstone of party policy dating back more than a decade may have been flawed. And to be sure, not all of the mistakes are hers.

But to call them mistakes might be a misnomer, actually, because on the hydro file, the Grits have succumbed to an all-too-familiar set of political sins. Some are venial, the kind from which a pol can regain a state of grace. But if recent signs are any guide—four Liberal losses in the last five by-elections, and a 15 per cent approval rating for the premier—others may prove mortal. An overview:

The Liberals faced three challenges on the energy front when they took office under Dalton McGuinty in 2003: inadequate capacity, aging power infrastructure and brown air. Their tripartite solution: invest in upgrades to the grid (a no-brainer after the 2003 blackout); shut down the province’s coal-fired generation facilities (which caused much of the pollution); and offer incentives for the production of renewable energy production.

That third item brought trouble, because the government’s idea of “incentives” for wind and solar producers was 20-year contracts at as much as triple the market rate for power. A report last year by the provincial auditor general, Bonnie Lysyk, found that Ontarians shovelled out $9.2 billion more than necessary because of those deals. Between 2006 and 2014, she found, consumers and businesses paid $37 billion above the market price of electricity (experts later noted some of that reflects the cost of upgrading infrastructure).

Worse, it must pay the green producers whether it needs the power or not. The province has since brought in a new process to lower costs, but the damage is done.

Maybe the McGuintyites thought generous terms were needed to get producers to invest in renewables. Yet the rates were out of line with those on offer in other jurisdictions. A generation of Ontarians will pay for their ingenuousness.

The electoral map after the 2014 election shows how concentrated Liberal power is around populous southern Ontario, and in Ottawa. That’s important, because the vast majority of homes in those areas enjoy access to natural gas, which they use to heat their homes. Gas has been cheap for the better part of the last decade.

Outside the Liberal south: a different story. Hundreds of thousands of households in small-town and rural Ontario rely mainly on electrical heating, which requires a lot of juice. So they got knee-capped relative to gas customers as the price they paid for electricity climbed 70 per cent between 2006 and 2014. These are the folks Wynne worries are now choosing between groceries and heating.

Imagine their fury upon seeing wind turbine farms and solar panel fields in their areas, knowing who’s doing the heavy financial lifting to make them possible. They’ve all but waved their arms to get government attention. But for most Liberal MPPs—whose urban-dwelling constituents weren’t feeling such pain—they were over the horizon and out of sight.

The McGuinty government’s confidence that it held the key to a brighter, greener future morphed at some point into the belief that it must see its mission through by any means necessary. In 2011, that pathology presented in a cynical decision to cancel construction of a pair of natural gas-powered generating stations in Mississauga and Oakville, where residents who didn’t want the facilities in their midst were threatening to punish the Grits at the polls.

That decision might have salvaged a shaky minority, preserving Liberal seats in battleground ridings. But it came at an enormous price to ratepayers—nearly $1 billion, according the auditor general.

This was a naked case of the party putting its electoral interests ahead of Ontarians’, suggesting the Liberals saw the power system as a pawn in their grand scheme. McGuinty retired under the cloud of the scandal in 2013, while two of his former top aides now await trial on criminal charges for allegedly destroying emails related to it. Wynne, who co-chaired McGuinty’s 2011 campaign, is dogged by the whole fiasco to this day.

Or lousy math—you can choose what to call it. In addition to the insane rates it guaranteed to producers of renewables, the province appears to have signed too many contracts with private producers because it overestimated future demand for electricity. One problem: manufacturers who once used up sizeable portions of the power have been slow to return to Ontario.

This has led to a perverse outcome where, effectively, Ontario pays to export electricity. Because it has little capacity to store power, the province has been forced to pay generators hundreds of millions to reduce production, while dumping surplus electricity to neighbouring provinces and U.S. states for much less than what ratepayers shell out to have it generated (the difference in 2014 totalled almost $800 million). In extreme cases they actually had to pay others to take it. Here’s the auditor general in 2014: “There were 1,952 hours in which the hourly Ontario electricity market price was negative and Ontario paid other exporters a net total of $32.6 million to take our power.”

More than forcing Wynne to admit mistakes, the power file has driven her government to drastic measures in the electrical sector. Having promised to balance the provincial budget while spending $29-billion on infrastructure, the Liberals needed to find money, and fast. So they decided to sell off 60 per cent of Hydro One, the Crown corporation that transmits electricity throughout the province and distributes to 1.4 million households.

That should raise about $9 billion, but it carries questions about whose interest will come first under the new model: the captive customers’ of Hydro One? Or the shareholders’? What recourse will ratepayers have if something goes wrong?

Finally, there’s the great payback. In September, Wynne announced an eight-per-cent rebate on hydro bills—essentially, the government will forego its share of the HST on amounts owed. The savings from this climbdown add up to a little more than $10 a month, on average. The Liberals claimed this meagre bit of relief was months in planning. But nothing screams panic like a government trying to buy your vote with a fistful of your own dollars.