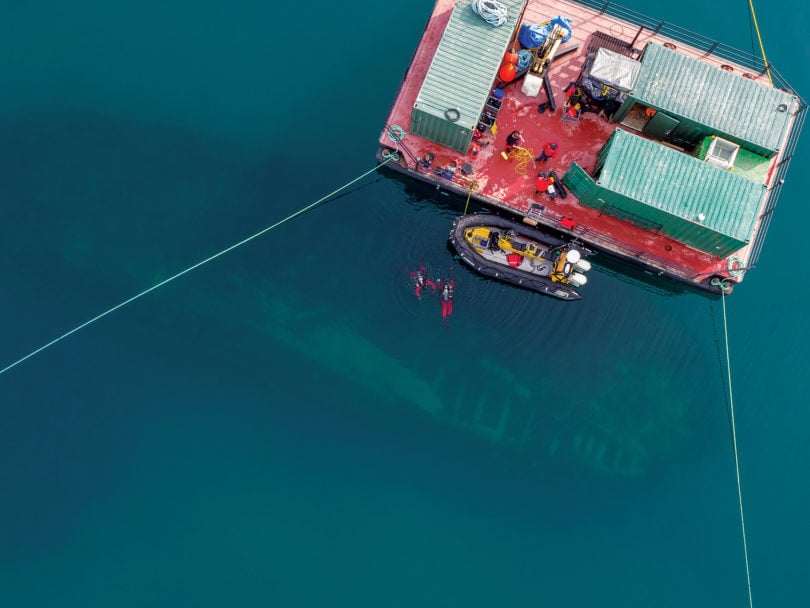 The most stubborn wool mitten ever knit lay still underwater off remote King William Island, frozen in time by a serendipitous combination of complete darkness, frigid water, and a blanket of sediment that preserved it until Parks Canada archaeologists started poking around last year.

The mitten was one of hundreds of artifacts excavated by the federal agency that, in concert with local Inuit, delicately and strategically scoured a small number of cabins on HMS Erebus, one of the two ships that constituted the ill-fated Franklin expedition that disappeared 175 years ago on its voyage in search of the Northwest Passage—and that captures the imagination of any Canadian who hears the tale.

“You could wear it tomorrow,” says Marc-André Bernier, the manager of Parks Canada’s underwater archaeology team, of the mitten. Bernier has searched the inner recesses of Erebus since it was discovered in 2014. Every dive produces a new discovery, unseen since either the Franklin crew abandoned ship or curious Inuit explored the vessel before it finally sank. “It’s magical,” says Bernier.

Ryan Harris, a senior underwater archaeologist with Parks Canada and the first to dive near Erebus six years ago, was crawling “hand over hand” on the sea floor through dark, hazy water when he confronted the vessel. “All of a sudden this very large ship looms out of the haze,” he says. “It’s quite majestic and stately.”

For years, Parks Canada teams have swum around the outsides of Erebus and Terror, but their windows for exploration have sometimes been remarkably brief. “Ice conditions often confound our plans,” says Harris. “Sometimes we only had a day and a half or two for getting the gear and personnel up there.” 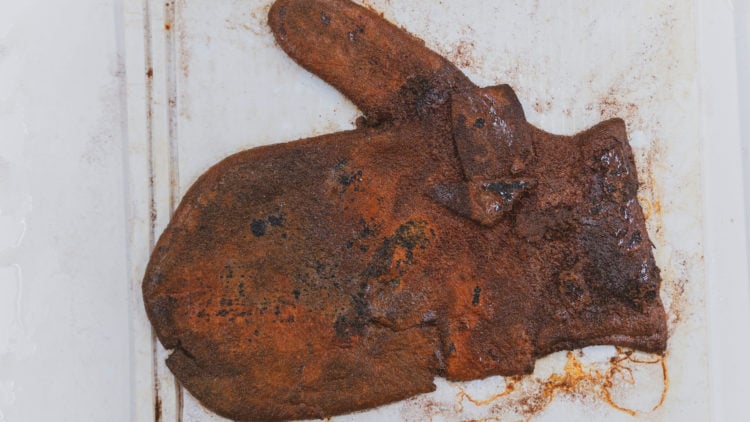 A wool mitten found on HMS Erebus was well-preserved by sediment and the dark, frigid waters (Courtesy of Parks Canada)

Finally, last summer, the divers went inside for a closer look. They’d mapped the ship, studied the chemistry and movement of the water, learned about the flora and fauna occupying nooks and crannies, and zeroed in on the rooms they guessed held the greatest bounty—sunken treasure buried beneath a century and a half of sediment.

They weren’t disappointed. Bernier would submerge for hours at a time, arriving at his “underwater office” keen to dredge as much sediment as possible. Once, he saw a gleaming light emerge and found it was a decanter with liquid still sealed inside. Harris races through a list of personal items they carefully excavated: a toothbrush with bristles; a hairbrush with errant strands still tangled together (a candidate for DNA testing); and a sealing compound that “still bears a thumbprint from the last person to seal a document.”

One of the most densely packed compartments was a pantry maintained by Edmund Hoar, the captain’s steward, who was only 23 years old when the expedition left England. Divers unearthed a lead stamp he used to mark his clothing—“Ed Hoar,” with an anchor dangling beneath the “o.”

Parks Canada’s bounty now sits in storage at a conservation facility in Ottawa’s south end. And that impressive haul, they note, represents an area of Erebus measuring only four square metres. “We touched on three of the cabins out of 20,” says Bernier.

That’s not even counting the expedition’s other sunken vessel, where the captain himself, Sir John Franklin, resided. “Terror is a very exciting prospect,” says Harris. The captain’s cabin may hold scientific instruments and daguerreotypes—primitive photographic images. “We do hold out hope we’ll come across documentary evidence,” says Bernier, of the ship’s final days.

Many mysteries remain about the movement of Franklin’s crew after the ships were lodged in ice, frozen in with no escape, and Parks Canada staff have found even more questions to answer. They discovered on Erebus a wooden object, possibly a “small piece of a ruler,” that bore the name of a sailor named Frederick Hornby. It wasn’t the first of Hornby’s personal effects discovered after he vanished. The McClintock search expedition, which unsuccessfully searched for the Franklin ships only a decade after their disappearance, found a silver spoon belonging to Hornby in an abandoned 28-foot boat off King William Island in 1859.

But Parks Canada’s divers were puzzled by the object’s presence on Erebus, because Hornby was registered as crew on HMS Terror. They have no idea how one man’s personal items ended up on the sister vessel. But every dive, they say, offers more clues.

For now, the focus remains on Erebus, the more vulnerable of the immortalized pair as its structure, less well-preserved than Terror’s, shifts in the currents. The divers say their work on Terror lags about two years behind. When they piloted a remotely operated vehicle through Terror’s cabins, the frozen-in-time images captivated the world. But Harris is itching to see it with his own eyes. “You can only do so much with robots.”

This article appears in print in the May 2020 issue of Maclean’s magazine with the headline, “Comfort in the cold.” Subscribe to the monthly print magazine here.