The Halifax crane wreck that forced evacuations and killed jobs

Weeks after Dorian, that spectacularly collapsed crane was still dangling. So were the lives of the locals. 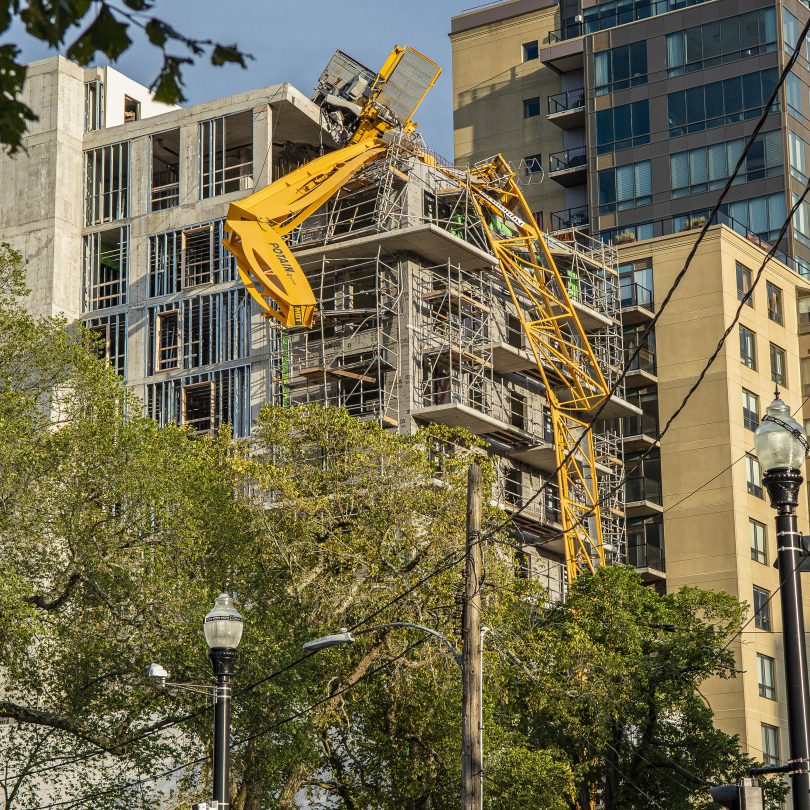 Two days after Dorian slammed into Halifax, Rebecca Carole and Jack Bateman thought they had made it through the post-tropical storm—formerly a Category 5 hurricane—relatively unscathed, only losing power for a little over a day. Then they heard the rap at the door.

The Sept. 7 storm had knocked out most of Nova Scotia’s power grid, uprooted hundreds of trees and—in what would become the jaw-dropping, unforgettable image of the whole ordeal—toppled a 300-tonne construction crane onto an unﬁnished, much shorter high-rise. The crane flopped over just a few houses away from Carole and Bateman’s three-story apartment building, sending angle-iron flying about before it came to rest, dangling like a piece of cooked spaghetti over the sidewalk. Looky-loos gathered, mouths agape and phones aloft to capture the wreckage.

The crane was also the reason why there were two ﬁreﬁghters now standing at Carole and Bateman’s door, matter-of-factly delivering their message: you need to evacuate. You have 20 minutes.

“For how long?” asked Carole.

“Four days to a week,” she recalls the ﬁremen replying. When she and Bateman asked where they should go, one of the ﬁreﬁghters gave her the number for the Canadian Red Cross.

So the couple scrambled, cramming Michael, their orange tabby, into his cat carrier, throwing clothes into a suitcase, grabbing toiletries and cat food. Out on the sidewalk, other evacuees gathered, befuddled: If the crumpled crane was so dangerous, why had the city waited two days to order them out?

That night, Bateman and Carole crashed with a cousin. The next day, they found a hotel and, later, they rented an Airbnb. Michael the cat was sent to a family in the countryside.

More than a week later, the crane was still in its spaghetti-ﬁed position while lawyers, engineers, insurance companies, and city and provincial ofﬁcials navigated red tape and myriad liability issues.

Meanwhile, evacuees and businesses in the area bled their fair share of money. By late September, Carole, a 24-year-old ﬁlm production coordinator, and Bateman, a 23-year-old freelance videographer, had spent hundreds of dollars on food, extra clothes, and rented equipment for Bateman to do his job because he didn’t have access to his own.

Information, they lamented, was hard to come by. “It’s really hard trying to plan your life around the unknown, trying to rent Airbnbs and put down all this money when you’re not even sure if you’re going to need it,” said Carole.

After the site remained untouched for 11 days, the province stepped in, declaring it a localized state of emergency and taking over the removal operation. “Any further delay is not acceptable,” said Chuck Porter, Nova Scotia’s minister responsible for emergency management, in a press release. Yet the delay went on.

RELATED: Treasure hunters flock to Oak Island, where no one has ever found treasure

The crane is owned by Lead Structural Form Ltd, which did not return calls for comment. Wadih Fares, the developer who owns the site, said the crane was properly positioned for the storm, adding: “We wouldn’t have left it there without being assured of that.” As a gesture of goodwill, he is reimbursing evacuees’ accommodation expenses up to $200 a day.

That doesn’t help the Dairy Bar, an ice-cream shop a few steps away from the crane, which had lost a quarter of its annual revenue. Normally open four months of the year, the business was forced to shut a month early due to the crane collapse. After a week-long power outage, 150 litres of dairy sat rotting in the fridge, and 20 litres of soft serve grew fur inside the $15,000 ice cream machine.

“Our equipment could be totally written off because of this,” said Emma Adamsky, one of the shop’s owners. “It’s a rough surprise and it just keeps getting worse. Every day we keep receiving more information making things more complicated or even more unclear.”

Other businesses—a hair salon, a law ofﬁce—were forced to move. And Dany Savickas’ life has also been turned upside down. A cook who worked 70 hours a week at Stillwell, a local beer garden, he was one of 12 who suddenly lost their jobs at the establishment six weeks early due to the crane collapse. He and his dog were evacuated from their apartment next door.

“This takes all my energy and I’m just trying to survive,” said Savickas, 31, who is bouncing from sofas to Airbnbs every few days while looking for work. “I’m struggling to stay positive. I just want my apartment and my life.”

Carole is keeping all of her receipts with the plan to recoup out-of-pocket expenses. “If it requires legal action, then that’s what it requires,” she said.

While it may seem insigniﬁcant, what bothers her most is thinking about her 25 houseplants slowly shrivelling inside the two-bedroom apartment. “It’s going to be really crushing to see that all gone.”

This article appears in print in the November 2019 issue of Maclean’s magazine with the headline, “When life is a crane wreck.” Subscribe to the monthly print magazine here.