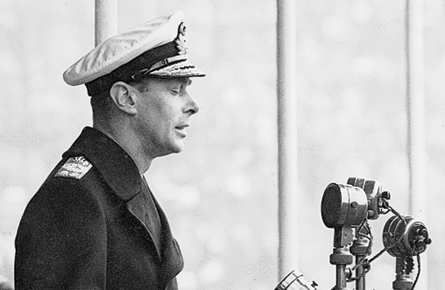 The defining moment of The King’s Speech, which earned Colin Firth a Golden Globe for best actor, is King George VI taking to the airwaves to address the nation soon after war was declared in September 1939. It’s a personal triumph—the result of years of speech therapy to overcome a debilitating stammer. But private letters at Library Archives Canada in Ottawa reveal that several months before this historic event, the king had broadcast live to Canadians without difficulty.

Charles Jennings (father of Peter, the late ABC news anchor) was the senior CBC broadcaster on the royal tour in the spring of 1939. His accounts of that cross-country visit survive in the letters he wrote home. In one, dated May 24, 1939, he describes the royal cavalcade’s arrival in Winnipeg for a series of receptions and a live broadcast by the king on the CBC.

After dropping off his clothes for pressing on the royal train, Jennings and his technicians made their way to Government House to set up a temporary studio in the living quarters arranged for the royal couple. During what Jennings describes as “probably the most intimate two hours that the king and queen have had since they came to Canada,” they chatted amiably with the royals, and installed a radio in an adjacent bedroom so Queen Elizabeth could listen to the broadcast.

Jennings writes that during the Empire Day speech, broadcast throughout the British empire, “the king was alone except for [private secretary Alan] Lascelles.” Jennings calls the king’s performance “magnificent,” writing that the monarch impressed himself. “He came out afterwards, as pleased as a child,” saying “well, the operation’s over and it was successful.”