The KKK has a history in Canada. And it can return.

Canada is not immune to hate, and a look at the history of the Ku Klux Klan's expansion efforts proves it 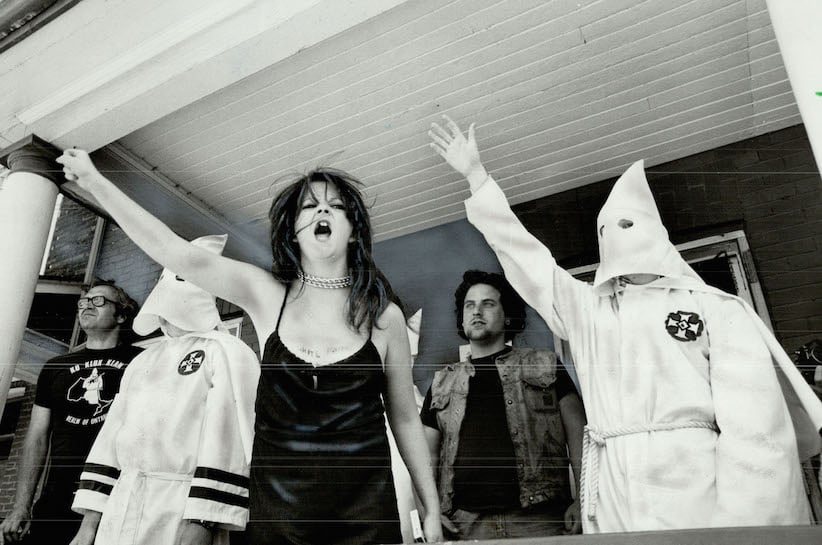 Members of the Ku Klux Klan on the veranda of an east-end Toronto house in May, 1981. (Photo by David Cooper/Toronto Star via Getty Images)

Last year, dozens of homes in Chilliwack, B.C., received flyers from the “loyal white knights of the Ku Klux Klan” that encouraged white people to rise up, be proud, and to “secure a future for white children.” Similar literature has been distributed door-to-door in nearby towns in Mission and Abbottsford.

Even though many Canadians are starting to tweak to the idea that their country “isn’t immune to racist violence and hate” (as Justin Trudeau recently tweeted), the KKK’s arrival might still seem a little out of left field, since that group is linked in the general cultural imagination to the American deep south. But if you think the Klan is new to Canada, think again—there were hooded men in Canada in the 1920s and again in the late 1970s. And we likely haven’t seen the last of it; when it comes to franchise opportunities, the hate group is, at its core, an aggressively expansionist as any burger chain or coffee shop.

This aspect of the KKK was observed in Canada as early as 1921, in a Maclean’s piece called “Night Riders Come to Canada,” which, among other things, contained the news that the organization was beginning to actively recruit women as part of its plan to increase its territorial range. The Grand Wizard was quoted in that same piece as saying that the organization was “increasing at the rate of 5,000 members a week,” and the numbers were growing twice as fast “north of the Mason-Dixon line” as they were in the south.

There are at least two reasons for this group’s aggressive expansion, aside from the nearly universal organization principle that, if a movement isn’t growing, it’s doing the opposite. The first of these is as simple as the collection of membership dues. As The Northern Advance, a Barrie newspaper, remarked in 1926, the $10 initiation fee collected from each of the 17 million Klan members added up to a pretty good paycheque for someone. The second reason, though, is more complicated, but well-illustrated by the case of Matthew Bullock, a black First World War veteran-turned-refugee to Canada from the Jim Crow south. Bullock became front-page news in 1922 when, despite his illegal entry into the country and the warrant for his arrest in North Carolina, he was not extradited, even after it turned into an international incident.

Accused of inciting a riot in his home state, “Nolina,” Bullock was demonstrably innocent, as was his brother, Plummer. While neither had been in the vicinity of the unrelated disturbance that day, the brothers were reportedly accused of it because they happened to have got into a shouting match with a white grocer over some bad apples (literally). Plummer, as one of the “trouble-makers,” was arrested, imprisoned—then lynched by a mob that broke into the jail. Certain that he would fall victim to the same terrorism, Matthew escaped to Canada. After some debate, once it was made clear that he would likely die if extradited, he was given sanctuary. That news didn’t sit well with the KKK, who threatened to invade Canada. On March 18, 1922, the Toronto Daily Star asked: “Are the streets of Toronto, at the witching hour of midnight, some time within the next three months, to resound to the clutter of horses’ hoofs and to be filled with an eerie cavalcade of white-clad figures, speeding forth upon a mission of ‘retribution’ a la Birth of a Nation?”

The night riders never came—at least not on horseback. But the KKK was designing other ways to penetrate Canada, since this country represented a vulnerability in the terror network’s efficacy—an escape hatch, albeit more metaphorical than real, since Canada didn’t really take in many Jim Crow refugees, just one very famous one. Protectionist anti-modern groups don’t tend to let the facts get in the way of a good moral panic, though. That was also how the Anti-Saloon League, many members of which were also card-carrying KKK members, viewed Quebec and Mexico—weak spots in that era’s War on Alcohol. The moment booze was banned in the United States, they started coming after their neighbours. What was the point of having a dry country if people can visit a border town and have a dirty weekend in Montreal’s cabarets or Tijuana racetracks? These movements start with a mandate to protect a region from foreign threats and then, nearly always, the mandate expands, justifying forays into foreign territories to remove the threat at its supposed source.

The invasion that the Star worried about in 1922 didn’t happen until 1924, when an official path for the Ku Klux Klan of Kanada was drawn up by two American wizards and Toronto resident James L. Cowan, who rented an office on Toronto Street near Adelaide Street, and set about recruiting. By 1926, a Barrie newspaper reported that there were gatherings of hooded men in more than a dozen Ontario towns, including Barrie, Sault-St-Marie, Exeter, London, and St. Marys.

The Canadian expansion of the KKK was buoyed by inter-war anti-immigrant sentiment, the usual white nationalism that had deep roots since Confederation and concerns over vice—alcohol, drugs and non-heterosexual monogamous sex that was often prejudicially associated with ethnic minorities. In the United States, similar concerns were in play, but the biggest reason for the revival of the anachronistic post-Civil War-era “Clansman” group at the start of the 20th century was the concern in the south that black Americans were making real political and economic gains. It was a backlash. And that—nearly 50 years after the end of the Civil War—was when the majority of Confederate statues were erected and the majority of Jim Crow laws (establishing segregation and trashing voting rights, among other things) were established. The KKK’s terror campaign was a way of ensuring that systemic discrimination wouldn’t be challenged.

Although the Kanada Klan, many of whom even embroidered maple leaf insignias on their robes, billed itself as a kinder, gentler mob, it was responsible for violent domestic terrorism, most frequently in attempts to burn down or blow up places of worship—notably in Quebec City, Barrie and Winnipeg, the latter incident causing 10 fatalities. In Oakville, a mob of 75 hooded men burned a cross while parading through the town en route to their targeted victim, a white woman about to marry a black man, which they tried to prevent by kidnapping her. (They married anyway and lived happily ever after.) None of this even gets close to the power and fear the KKK wielded in Saskatchewan, where an extremely virulent Moose Jaw chapter thrived, influenced by aggressive franchisers from South Bend, Indiana.

Before all of this happened, Matthew Bullock was long gone, apparently to Europe. Whether he feared the expansion of the KKK to Canada or the slow institution of practices of systemic racial segregation in hospitals, schools, restaurants, taverns and theatres (with “monkey cages” for black patrons, which Viola Desmond famously refused to sit in), Bullock was not blind to the fact that the United States didn’t have a monopoly on racism. He may have found his way to freedom here, but he was not in the land of the free, despite how his story was used to reassure Canadians they did not have a problem with racism, even as immigration laws became more restrictive for people of colour from the U. S. and hate groups were welcomed with open arms.

Regardless of whether the flyers in B.C. were delivered by an organized chapter of the KKK or a lone white nationalist, if the tiki-torch klan we saw out in force in Charlottesville continues to expand, Canada will be on its radar again. As it was in 1979, when then Grand Wizard David Duke told a Maclean’s reporter that Canadian membership had quadrupled over three years. The following year, it became clear that Duke was right, and the KKK had made serious inroads into Canada when Canadian Grand Wizard James McQuirter opened an office in Toronto’s east end that quickly became a lightning rod for citizen outrage, especially since it was alleged that the KKK was recruiting in Ontario’s high schools. Protests organized by the Riverdale Action Committee Against Racism prompted the Toronto KKK office to move to the other end of the city, where it was promptly met by another community group—the Parkdale Action Committee Against Racism. They were outnumbered and unwelcome, no matter where they turned.

What we learned from our last journey down a similar road was that being smug about our own virtue and blind to our own systemic racism and white nationalist groups only made it easier for KKK Kanada to set up shop, under the guise of being a milder, more polite version of hate. Of course, there’s no such thing. Not then. And not now, either.