The library is open—to Meghan Murphy and everyone else

Image of the Day: A target of trans-rights activists speaks her piece, and the Toronto Public Library makes good on its commitment to the 'widest diversity of opinions and perspectives' 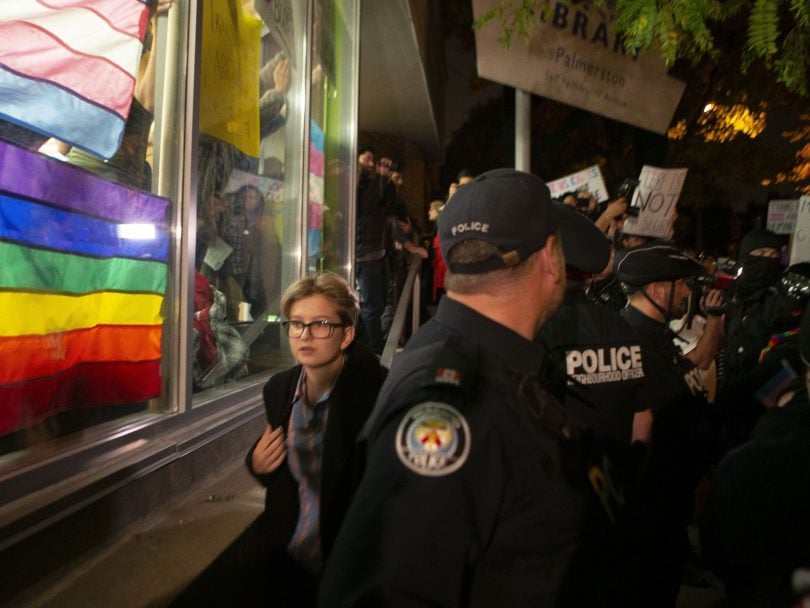 An audience member departs behind a line of police as pro-transgender rights activists gather outside a Toronto library after writer Meghan Murphy spoke at an event on Tuesday. (Chris Young/CP)

“When the library is open,” the American journalist and former White House press secretary Bill Moyers has said, “no matter its size or shape, democracy is open, too.” But what happens when democracy turns on the library itself? To illustrate the paradox, some 500 protesters swarmed a public library in downtown Toronto to rally against a talk organized by Meghan Murphy, a self-described feminist activist whose big controversial opinion is that trans women should not be allowed in safe spaces for females (such as prisons, refugee camps and women’s shelters). To be clear: Murphy’s relationship with the library does not extend beyond renting our space to meet 120 supporters. But after years of virtual screaming matches ended with Twitter banning Murphy, local trans activists perhaps thought enough pressure could be applied on their city’s library to de-platform her physically, too. Things didn’t end that way. Instead, police showed up to protect event-goers from the shouting masses; city council is now divided over whether libraries should change their standards; and Toronto’s head librarian, Vickery Bowles, has become an unlikely hero to free-speech advocates worldwide after defending Murphy’s right to rent the room. “Vocal opposition cannot be allowed to shut down minority voices whether they are offensive,” Bowles told the Toronto Star before the event. Her stance shouldn’t surprise anyone. That Bill Moyers quote? The Toronto Public Library posted it to its Pinterest page in 2017 as part of Freedom to Read week, a campaign to promote intellectual freedom. “Public libraries are welcoming, inclusive spaces that make available the widest diversity of opinions and perspectives,” she wrote at the time, “including those that are unpopular, unconventional and even unacceptable to some.” In other words: this was a battle she was ready to fight.