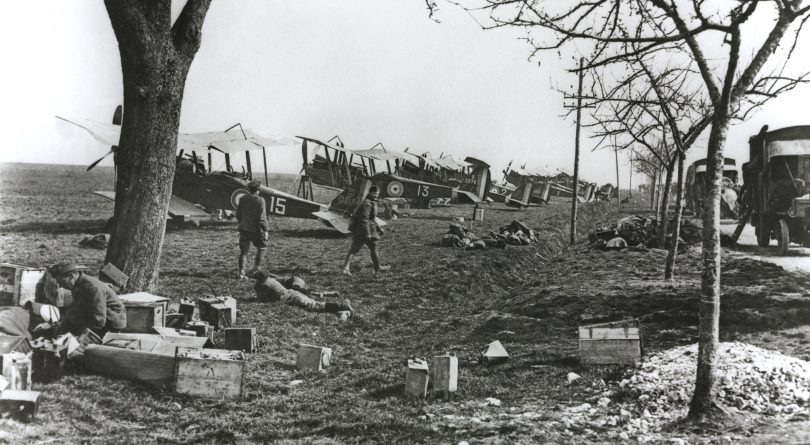 RE8 observation biplanes of the Royal Flying Corps beside a road in northern France during World War One (1914-1918). (Science &amp; Society Picture Library/Getty Images)

The First World War concluded on November 11, 1918. In commemoration of its 100th anniversary, Maclean’s asked renowned historian J.L. Granatstein to track the contributions of Canadians to the war effort and how it helped define our country.

“I would rather commit suicide than join the army,” 18-year-old Charles Hendershot wrote to his mother in Harrow, Ontario, in 1916, two years into the First World War. But, he said a few months later, there was the Royal Flying Corps: “there is very little danger of a flying machine falling…” and there was “excitement in a fighter.” Whether his mother’s concerns were eased was unlikely when he enlisted, and they certainly increased when her other son Warren, age 20, also joined the RFC.

Charles died in a crash in training in England the next year. From Britain, Warren wrote home to say “Don’t lose any sleep over me….This life is far too short to spend in worrying and moping. Just take everything as it comes.” In another letter, he said “I am not afraid of getting killed…. To die on the battlefield fighting for your country is one of the greatest honours there is.” Warren survived his training and became a fighter pilot in France, flying a Sopwith Dolphin fighter in the summer of 1918.

In mid-September, he had one of his first encounters with enemy aircraft. “While you are more or less afraid all the time, yet you are not what you would call ‘frightened’….you always think you are better than they are.” Even when his squadron lost three pilots killed above the Canal du Nord battlefield, Warren still sounded almost enraptured: “I thought it was the greatest sport I had seen in a long time.” It must have been terribly exciting to fly if you were 21, even if you had begun to believe that you might die.

But after a dogfight pitted nine British fighters against what seemed like 50 Germans on October 30, less than two weeks before the Armistice on November 11, Warren’s private diary entry was much less enthusiastic. Five of his mates had been shot down. “How the four of us got back is a mystery. Everyone feels rather done in the rest of the day.” Later he added, “I was never in such a tight corner in all my life.”

Warren Hendershot was not untypical of the “knights of the air.” He learned that there was no chivalry in the air and only the crack shots survived the murderous fights. The Germans generally had better aircraft and more experienced airmen, but the Canadian and Imperial fliers persevered. Historians have calculated that the life span of a pilot in action was about ten weeks. Morale fluctuated, naturally enough in such circumstances, sometimes leading the overmatched to flee combat, but the squadrons had good leaders, and fliers fought for their wingmates—and themselves. There were medals and honours for the successful, boozy leaves in Paris or London in a sharp uniform with pilot’s wings on the breast, and there was always discipline enough to keep the squadrons flying. Some prayed, but most airmen kept going because flight continued to capture them, and because they ultimately hoped against hope that death would take the other fellow, not them.

Almost one quarter or 22,000 of the Royal Air Force’s flying officers were Canadians, and some 1,400 died in training or combat while another 1,500 were wounded or taken prisoner. Warren Hendershot survived the Great War and returned to southwestern Ontario, where he ran a Stedman’s five-and-dime store and raised a family. He had had his excitement. In the Second World War, he joined the Royal Canadian Air Force as an administrative officer. He died in 1983.