The miracle twins and the unknown hero

Kris Chung walked through the front door of Toronto General Hospital at 7:00 a.m., as instructed. Over the next hour, while medical staff prepped him for surgery, every doctor who approached his bedside asked the same question: Are you absolutely sure about this? It is not too late to change your mind.

“I was very calm,” Kris recalls, more than a year removed from that April morning in 2015. “Honestly, I felt more nervous about walking into an exam than being wheeled into the operating room.”

A soldier-in-training, the 19-year-old assured the docs, again and again, he was good to go. By 8:00 a.m., the anaesthetic kicked in.

Across the street at Toronto’s Hospital for Sick Children, four-year-old Binh Wagner was waiting for what Kris had come to give: a piece of his healthy liver. By then, Binh and her twin sister, Phuoc, had triggered countless headlines around the world, their story almost too heartbreaking to believe: both girls, adopted from a Vietnamese orphanage, needed life-saving liver transplants—but their dad, a perfect match, could donate to only one. (A portion of his liver had already gone to Phuoc, deemed the sicker of the two.)

Moved by the girls’ rarest of plights, more than 600 strangers volunteered to be the second donor, knowing full well they were signing up for major surgery, weeks of recovery, and complete anonymity. Kris was the chosen one, his identity known only to hospital staff and a few trusted others. In a medical drama that was so widely publicized, he was the unknown hero.

“I’d like to thank the donor,” said a tearful Michael Wagner, the girls’ Kingston, Ont., dad, at a post-surgery press conference. “They put their life on the line for someone they’ve never met, and changed our lives forever.” Beside him, his wife was crying, too. “I would like to say to the anonymous donor that you were in my thoughts as much as my daughter was in my thoughts,” Johanne Wagner said. “Thank you for your unselfishness.”

Today, 16 months later, the Wagners know exactly where to direct their eternal gratitude. Binh’s anonymous donor, it turned out, lived barely five minutes down the road, in the dorm at Kingston’s Royal Military College (RMC). They connected on Facebook at first, then eventually at a downtown coffee shop. “I just gave him a big hug when I first saw him,” Johanne says. “I don’t even think I said: ‘Thank you.’ It was more: ‘Wow, it’s you.’ ”

As epilogues go, this one is tough to beat: a young man who risked his life to help a dying stranger meets the beautiful little girl he saved. But this postscript doesn’t end here.

Over the past few months, Kris has become so much more than the anonymous organ donor; he is now the closest thing to a member of the family. He drops by the Wagners’ house nearly every day—always welcome for supper—and his bond with Binh, now five, is palpable. Her face lights up when he walks through the door. “My Kris,” she calls him. Anxious to change even more lives than he already has, Kris has also joined forces with Johanne to launch a not-for-profit organization, Twins for Hope, aimed at helping impoverished children in Vietnam access shelter, education and health care. 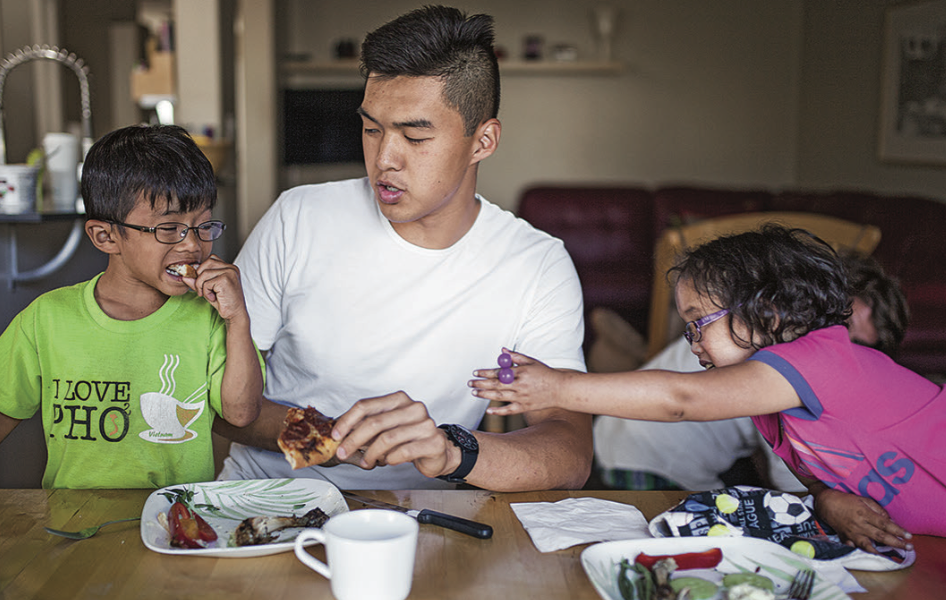 “It’s like we’ve known each other for years and we just had to reconnect,” says Michael, an Army major who deployed to Afghanistan three times. “Kris came over to the house, and then, almost sort of naturally, he’s always been in the house.”

Now he is out of the shadows, sharing his inspirational story for the first time. “Even to this day, it’s unreal how Binh has a little bit of me inside her,” Kris, now 21, tells Maclean’s, sitting at the Wagners’ dining room table. “I guess I feel a little bit responsible for her as well now, because I have given her a chance in life. She is like my own sister.”

Like the twins, Kris moved to Canada as a toddler, immigrating to Vancouver from Hong Kong with his parents when he was two; now an officer cadet at RMC, he is preparing for a career in the Army. So when he first read about the girls in January 2015, the photo attached to the news article struck a very personal chord: Michael in his combat uniform, surrounded by his nine kids (five biological, four adopted from Vietnam).

Kris had never met Michael before, and they don’t cross paths at work. But he felt compelled to assist a fellow military member, especially one who had the courage to adopt two very sick girls from his home continent. As soon as Kris realized he matched all the criteria—young, healthy, blood type A or O—he filled out the online form to volunteer.

Then he phoned his older brother in Vancouver. “I still remember that call,” says Terence Chung, 28, a real estate agent. “I had quite a long talk with him, about 40 minutes, and I was quite worried. But I knew he wanted to do it.” At the end of the conversation, the brothers agreed on one thing: they shouldn’t tell their mom and dad just yet.

Kris made the initial shortlist of volunteers, agreeing to a battery of pre-op tests, including meetings with a psychiatrist. All the while, he followed the viral news coverage from afar, wondering when the surgery might take place. At one point, the hospital informed him that someone else had been chosen to help Binh. But that all changed one April afternoon, when his phone rang. On the other end was Dr. Gary Levy, director of the Living Donor Liver Program at Toronto General UHN.

“He said: ‘The person who was first in line could not make it for whatever reason. Could you come?’ ” Kris recalls. “I said: ‘Yes. How early do you want me in?’ He said: ‘Tomorrow.’ ” Kris caught a train that night, meeting Levy, as planned, early the next day.

Before the anaesthetic took effect, Kris remembers thinking about Binh, a girl he still only knew from the news. “She was so sick,” he says. “But I hoped for the best for her because I knew it was a bigger operation for her than for me.”

Not that Kris was in for an easy ride. Doctors sliced him open and removed about 15 per cent of his liver (it grows back), leaving a pen-length scar on his abdomen. And although Toronto General has yet to lose a live liver donor on the operating table, the procedure is anything but routine. Kris was repeatedly warned that there’s a possibility, however slim, that he might not wake up.

When he did come to, he immediately asked a nurse to retrieve his phone so he could text his brother. Terence had barely slept the night before, holding the family secret. (“If anything happened to my brother, my parents would have disowned me,” he says now.) All told, Kris spent a week in hospital. He was already back in Kingston when news of the surgery was announced in late April—and when Michael and Johanne, facing a roomful of reporters, thanked him from a distance.

As touched as he was, Kris was initially focused on his own recovery—and breaking the news to his mother and father. “I phoned my dad up first and said: ‘Hey, I want to tell you something serious,’ ” he recalls. “He was shocked. I think he was about to faint. I told my mom, too, and she couldn’t really respond.” It didn’t take very long for their shock to give way to pride.

At the Wagner residence, the anonymous donor was never far from the family’s thoughts. “You’re thinking: ‘Who is this mysterious person? Is this a mother? Is this a father? Is this a young woman? A young man?’ ” Johanne says now. Even her husband—a logistics officer whose greatest gift may be his ability to compartmentalize—had an itch to know more. “What makes someone like that tick?” Michael asks.

They soon found out. Just a few weeks after Binh’s surgery, a person using an alias contacted Johanne on Facebook and provided the donor’s name (though slightly misspelled.) Adamant about maintaining Kris’s right to anonymity, Johanne didn’t even think about contacting him. In fact, she was livid someone was sharing his name because she didn’t want it to leak without his consent.

In time, though, Kris started commenting on Johanne’s social media posts and liking certain photos. Facebook chats led to email conversations, and email led to text messages. By April 2016, the one-year anniversary of the surgery, both sides knew the truth, but neither was saying. Finally, it was Kris who posed the question: “Would you like to meet?”

Since then, Kris has been able to see, up close, the fruits of his enormous gift. Binh, like Phuoc, looks nothing like the frail girl she once was, her liver ravaged by Alagille syndrome, a genetic disorder that inhibits the body from absorbing the necessary nutrients in food. They’ll be in senior kindergarten come September. “I don’t think a day goes by,” Johanne says, “that I don’t tell Binh, in private: ‘You have to say thank you in your heart to Kris.’ ”

Kris doesn’t need to hear that. Humble and soft-spoken, he brushes aside any suggestion he’s a hero, or that most 19-year-olds would never think about doing what he did. He’d much rather talk about his next initiative: Twins for Hope. (Johanne is a program director with TDH Ontario, an adoption agency that works with orphanages in Vietnam. But her charitable work is independent of her job.) Like he did that day last year—when he filled out the donor form as soon as he read about the Wagners—Kris gave his typical reply when Johanne asked him to be director of operations for Twins for Hope: “I’m in.”

“I’m glad he’s in our lives,” Michael says. “He’s got something inside that he has to help other people, and I’m not even sure he knows he has that inside. It’s almost like he is driven by a force to do these types of things.”

More information about Twins for Hope can be found on Facebook and GoFundMe.