The MMIWG final report lands: 'I hold up a mirror to Canada'

The chief commissioner urged Canadians to learn their 'true history', delivering a scathing report monumental in scope and minute in detail 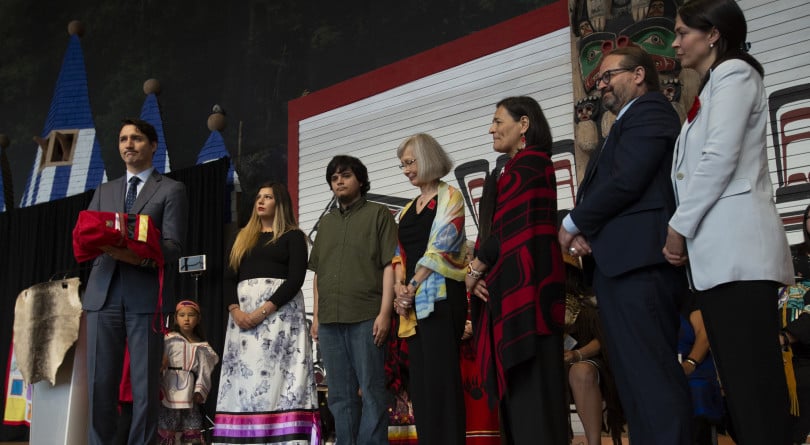 Trudeau holds a copy of the report presented to him by the commissioners of the national inquiry in Gatineau, Que., on June 3, 2019. (THE CANADIAN PRESS/Adrian Wyld)

It was of course the consciously freighted language that grabbed all the headlines and sparked many of the media questions the day the National Inquiry into Missing and Murdered Indigenous Women and Girls released its final report.

The hefty document—as big as a New York City telephone book and the product of nearly three years of work, hearings across the country and considerable controversy and upheaval—called the thousands of cases of dead and disappeared daughters, aunts, mothers, wives and friends “nothing less than the deliberate, often covert campaign of genocide,” adding, “This is not what Canada is supposed to be about; it is not what it purports to stand for.”

The 1,200-page report was handed over to Prime Minister Justin Trudeau during an hours-long closing ceremony at the Canadian Museum of History in Gatineau, Que., just across the Ottawa River from the Parliament Buildings, on Monday. Every aspect of the ceremony was imbued with symbolism, both collective and highly personal.

It seemed nearly every person in the crowd was wearing at least one item of red clothing, in tribute to the hue that has come to symbolize the lost women and girls and the urgency to find justice for them. Like the community hearings themselves, the ceremony was designed to let every member of a large and diverse community add their individual voices to a collective truth that screamed not to be ignored or met with complacency.

A running theme through the remarks of the day and in the report itself was an invocation to all Canadians—particularly non-Indigenous ones—to look closely, to listen and to allow themselves, effectively, to be implicated in the ingrained patterns of racism and colonialism that allowed these deaths and abductions to happen—and therefore to be implicated in the solutions, too.

“Today, the commissioners and I hold up a mirror to Canada,” Chief Commissioner Marion Buller said. “We reflect back what we have heard and what we have documented.”

READ MORE: Inside the meltdown of Canada’s MMIW inquiry

She elicited a big cheer from the crowd when she exhorted Indigenous people to “decolonize yourself” by learning the history of their people and the “true history” of Canada. But Buller reflected the tone of the day and of the report itself with her relentlessly fierce message that no one look away or back off on this issue now that the report is printed and bound.

“The murders, the abductions, the human trafficking, the beatings, the rapes, the violence—yes, the genocide—will continue unless all Canadians find the strength, courage and vision to build a new, decolonized relationship with each other based on respect and self-determination,” she said. “Let us walk together. Let us work together. We must do this, together, to achieve our destiny as strong, proud people in this great nation.”

Commissioner Qajaq Robinson—who was raised in Nunavut and speaks fluent Inuktitut but is not Indigenous herself—suggested that many of the people watching and listening to the ceremony might have similar reactions to her own: “Guilt, shame, denial, the urge to say ‘No, no, that’s not what this is. This is not who I am. I didn’t play a part in this. My ancestors didn’t play a part in this. We’re good people.'” But the families and survivors who spoke to the inquiry in 15 community hearings held across the country revealed a collective reality she urged others not to look away from.

The closing ceremony was for the most part a polished affair, but there were emotionally raw moments and countless personal, homemade gestures that made it far different from the usual government event.

The event was held in the Grand Hall of the museum, with a soaring stretch of windows on one side that looked directly out on Parliament Hill and a museum backdrop of West Coast tree line, six Indigenous houses and a row of imposing Pacific Coast totem poles.

Everywhere you looked, t-shirts and homemade placards spoke for the family members who had come to listen: favourite snapshots transformed into desperate missing posters, birth and death dates that occurred far too close together, smiling women and girls who together represented a national tragedy, but whose faces, when worn on the chest or clutched in the hands of people who loved them became once again who they were: real people.

They were too numerous, and in many cases, their fates were so bureaucratically overlooked as to be uncountable, the report concluded.

Commissioner Michele Audette said some of the value of the sprawling report is that it made the scale of the tragedy, and the social and historical ills that created it, too glaring to be ignored or explained away. “We need to change. Did we really need a national inquiry for that? No,” she said. “But with this inquiry, we will be able to say to the academics, the lawyers, the people that don’t think that there is a genocide today: we have 1,200 pages to prove it.”

She became obviously emotional when she invoked another theme that ran through most of the remarks of the day: that the momentum cannot be lost now, and all the work and good intentions and fierce advocacy cannot fall into useless and toxic silence. “It has to happen. If it won’t, I’m not sure we will have another national inquiry,” she said, voice breaking. “And I’m not going to wear this on my shoulder or my heart, because we need to change, right now.”

Over its nearly three years of existence, the inquiry had been riven by staff turnover, high-profile resignations, criticism from families, advocates and Indigenous leaders and various delays. Just weeks before the final report was to be delivered on April 30—which was itself a delay from the Nov. 1 2018 deadline in the original terms of reference—the inquiry announced that the federal government had opted to delay the release to ensure “the highest quality of translation.”

When the full report finally landed in public on Monday, the inquiry’s recommendations proved to be monumental in scope and minute in detail, constituting 231 separate “calls for justice,” which Buller said are “not mere recommendations or optional suggestions. They are legal imperatives.”

These items are contained in a small square book about the size of a slice of bread—an addendum to the report—and they range from calling on federal, provincial and territorial and Indigenous governments to implement a National Action Plan to address violence against Indigenous women and girls; to improving policing in remote communities; to training people who work in the hospitality industry to recognize sexual exploitation and human trafficking; to calling for more Indigenous staff in child welfare systems.

“They are calls for justice,” Buller said. “Because that is what you, the families and survivors, told us that you want: justice.”

Trudeau sat in the front row of the audience at the closing ceremony, but he was a distinctly secondary presence at the event. He did not rise from his seat or speak until late in the morning, when he climbed the stairs to the stage to receive the final report, symbolically bundled up on a Tikinaagan, or cradle board, similar to those some Indigenous people use to swaddle their babies. “The action protects the sacred truths within the report and symbolizes rebirth and new possibilities,” the inquiry explained of this part of the ceremony. “A new nation is born.”

When Trudeau spoke, he was relatively brief, saying he was “humbled and grateful” to receive the final report, acknowledging the fraught work that went into creating it. He notably did not use the word ‘genocide’. “The process has been long and I can only imagine how awful it’s been to relive such intense pain,” he said. “And to the families and survivors here today and to those watching or listening at home, I want you to know that this report is not the end. The work of the commissioners, the stories they have collected and the calls for justice they have put forward will not be placed on a shelf to collect dust.”

That last line earned loud cheers, and he had to pause before continuing: “I know and you know that we need to fix the way things work in this country.”

It was Robinson in her remarks earlier from the same stage who perhaps most neatly summed up the monumental rebuke the unsparing report directs at a certain notion of Canada—and how the reaction and concrete response to it could provide an answer to the country’s existential soul-searching.

“I say to you now, it might challenge who we think we are, who we hope to be,” Robinson said, totem pole sentries soaring above her head, weathered and cracked by time and climate. “But who we will be, and who we are, is ultimately defined by how we respond now that we know.”