The N.W.T. premier has a sweeping vision for Canada's North. Is he dreaming?

A full-service military base, a floating university and icebreakers galore are among Bob McLeod's ideas for asserting Canada's shaky sovereignty in the Arctic 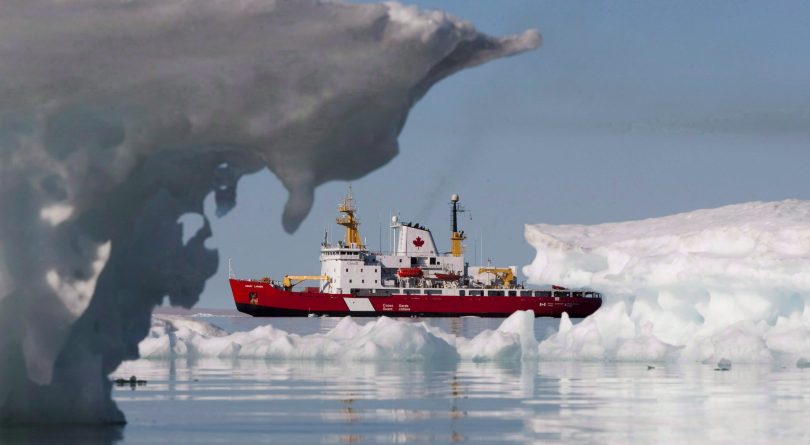 The facts are really impressive. Canada controls a larger Arctic land mass than any country—a portion so big it represents 40 per cent of this country—and nearly half of the Far North’s coastline. It was Canada that proposed establishing the Arctic Council in the 1990s, an organization that now plays a major role in the melting region’s sometimes chilled international relations. Few Canadians, however—less than 0.25 per cent of us—actually call the place home, making it one of the least populated Arctic regions in the world.

In the race to control and develop the area, critics say, Canada is desperately falling behind in a field comprised of the world’s greatest powers. In May, U.S. Secretary of State Mike Pompeo contended that Canada’s claim to the Northwest Passage is “illegitimate.” Russia, meanwhile, is more vocal about its robust Arctic policy than perhaps anything else. And China, a country with no northern territory to claim, has also somehow nudged its way into the scramble. All of this has been on the mind of Northwest Territories Premier Bob McLeod, who has been critical of Ottawa’s efforts to stake its claim to the North and, more recently, delivered a keynote address alongside Ólafur Ragnar Grímsson, the former longtime president of Iceland, at the Arctic Encounter Symposium in Seattle. He spoke to Maclean’s writer Kyle Edwards about his vision for Canada’s Arctic and what it means for the nation’s future.

Q: How do you think southern Canadians view the Arctic?

A: Canadians in the south think that the Arctic is a beautiful, clean place where nobody lives—it’s a mythical place. They think everything will be fine. In my view, having been born and raised up here, we see things changing dramatically every day. People from the south are telling us how to live and what not to do, but the fact of the matter is that the south is the problem.

Q: What concerns you the most?

A: Our concern is that there are at least two significant changes in the Arctic: one obviously is climate; the other is the fact that the geopolitics are changing significantly.

RELATED: Why Arctic icebergs are heading south earlier than usual

The Arctic is getting a lot of attention from superpowers. Russia has a dozen icebreakers and they have six or seven ports in the North. China has been working on an Arctic strategy—they’re building a nuclear icebreaker. When you look at a map, you’ll see that Yellowknife or Tuktoyaktuk is a lot closer to Beijing than Toronto is. It would take about 20 days off shipping  if you go through a northern route [to reach Asia from Europe]. Then you’re hearing the U.S. making statements about Canada’s claim to the Northwest Passage. It makes you whether if push comes to shove the U.S. would protect us.

Q: How would you assess Canada’s response to these developments?

A: It makes you wonder whether Canada has done enough. We need a different approach: a 10-year Arctic plan, which should give us enough time to build and develop infrastructure.

Q: Would you say Canada is falling behind when it comes to asserting sovereignty?

A: I certainly think so. What do we have in the Arctic? We have the Coast Guard that is headquartered in Iqaluit. We don’t have any ships per se. We’ve been saying for years that Canada should help develop and grow Arctic communities because strong, healthy communities would be the best evidence of Arctic sovereignty. Search and rescue fly out of Trenton, Ont. or Comox, B.C. Other than that, you get the odd icebreaker that comes up, usually with researchers.

Q: You have raised some really interesting, far-ranging ideas in recent weeks. Can you talk about some of them and your vision for the Arctic?

A: On the economics side, we need to take an activist vision of the Northwest Passage—to show that there are internal waters to Canada. I’d like to see at least three icebreakers and three deep water ports. We need a special economic zone in Canada’s Arctic. We need a stronger military presence, and I think we should have a full base in the North, preferably in Inuvik with at least 5,000 permanent personnel. I think we should move the Coast Guard base to Tuktoyaktuk on the Beaufort Sea. We need to create a federal department of Arctic affairs fully headquartered in the North, preferably in the Northwest Territories.

RELATED: The North and the great Canadian lie

Q: But you would also like to see more people move to the North, or at least spend more time there.

A: I think there needs to be a Canada-wide civil service rotation program. In the old days, when the North was under the Canadian government, public servants were circulated throughout the region so they could gain experience and learn how to make decisions about the North. Of course, we don’t have enough people in the Arctic—this is something we’ve struggled with for a long time. The Northwest Territories is the only jurisdiction whose population has been declining. We should have a northern immigration policy, with the objective of getting approximately a million people in the Arctic by 2050. There’s also a need to build and develop a knowledge economy—we need a northern university and a permanent offshore Arctic university aboard one of the two existing icebreakers to study the environment.

Q: Do you think southern politicians and bureaucrats spend enough time in the North?

A: We get federal politicians that come up here, mainly in the summer, to make announcements and we certainly appreciate those. I had called for a national discussion on the future of the Arctic and that didn’t happen, so we’re trying to make it happen on our own by having speaking engagements in the south.

So those are some of our ideas, and of course it’s not an easy task to change the way people think. We have to come up with a strategy.

Q: You’ve supported the need for more oil and gas development in the past, and were critical of Justin Trudeau’s five-year moratorium on Arctic drilling in 2016. How does tackling climate change and protecting the environment fit into your vision for the Arctic?

A: That’s the crux of what I’m saying. When people hear of climate change, the first thing they say is, ‘shut everything down in the North.’ And yet everywhere else has oil and gas development going on. We’re so small up here. We’ve got 44,000 people and we generate 0.01 per cent of the world’s greenhouse gas emissions. I think that people have it all wrong when they say they don’t want any resource development in the North.

Southern Canadians don’t see the effects of climate change on a daily basis. Here we see it every day of our lives. Everything is changing. People say we should stop everything, but we’re not the ones who are the problem.

Q: In a recent legislature speech, you said that you would like to see the Arctic, or the Northwest Territories, become a ‘hub for trade and transportation.’ What did you mean by that?

A: We should be a centre of a large, economic, free-trade zone. If you look at a map, we’re very well positioned compared to other Canadian centres in terms of travel and shipping distances. Where we’re located we can be a basis for future [transportation] … crisscrossing freely by sea and air between and among the Arctic states.

Q: After nearly three years of work, the federal government will be releasing its new Arctic policy framework in June. How optimistic are you that some of your ideas and concerns will be addressed?

A: The reality is we’re there. I think the question is whether it’s too late. Canada and five or six Arctic countries have put in their [territorial] claims to the North; Canada submitted its claim last week [to the UN]. I don’t know how long it will take to process those claims—they’ve been working on it for the past 10 to 15 years now. I imagine it will take a while, but I think it’s not too late to start taking these actions and shift things in our favour.

(This interview has been edited and condensed for clarity and length.)