PQ has lost monopoly over sovereignty 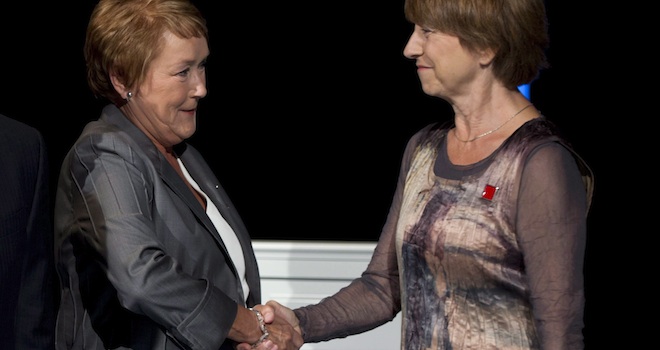 PQ leader Pauline Marois shakes hands with Quebec Solidaire co-leader Francoise David, left to right, while on the set prior to the leaders' election debate on Aug. 19. (Paul Chiasson/CP)

For the first time in nearly 14 years, the Parti Québécois will form Quebec’s next government. This in itself is incredible for the sovereignist party and its leader Pauline Marois, both of which were teetering on political oblivion barely a year ago. Just last summer, Marois faced down four deserting péquiste MNAs, an attempted putsch by backers of former Bloc Québécois leader Gilles Duceppe and an electorate that was decidedly ambivalent to her charms. There’s a reason her supporters call her dame de béton—Lady Concrete.

Yet the victory of Quebec’s first female Premier is nonetheless qualified. The PQ won office with less than 32 per cent of the vote, it is the fourth-lowest showing in PQ’s 42-year electoral history. It is 3.3 percentage points lower than just four years ago, when the party became Quebec’s Official Opposition. It is why, despite the overwhelming and near-chronic unpopularity of Jean Charest’s Liberals, Lady Concrete was unable to form a majority government.

Perhaps more hurtful to péquiste sensibilities are the reasons behind the ‘loss’ of a majority government. The upstart Coalition Avenir Québec, led by former PQ cabinet minister François Legault, siphoned support from the vote-rich regions of Montreal’s exurbs and the Laurentian region north of Montreal. The CAQ also played spoiler in certain ‘getable’ ridings for the PQ, allowing the Liberals to slip up the middle.

Yet perhaps most galling for péquistes is how an astounding number of sovereignist votes went to parties other than that of René Lévesque. Québec Solidaire and Option Nationale, two parties whose platforms call for the separation of Quebec from Canada, garnered a total of roughly 346,000 votes across the province-—an amount equal to nearly 25 per cent of the total PQ vote.

The most glaring result of this diversion of the sovereignist vote was in Montreal, where the co-leaders of Québec solidaire won out against two star péquiste candidates, including MNA Nicolas Girard. And while he failed to win his own seat, Option nationale leader Jean-Martin Aussant won the support of former PQ Premier Jacques Parizeau—even though some polls had Aussant in a dead heat with his PQ opponent.

The less evident consequences are no less remarkable. According to poll analyst Eric Grenier, as many as 22 ridings could have swung to the PQ had Quebec solidaire and Option nationale not been on the ballot—more than enough to form a majority government.

As well, the corresponding bump in popular support would have given that much more of an argument for Marois to pursue another referendum on sovereignty. As it stands, with only 54 of Quebec’s 125 seats, the PQ will have a difficult time fulfilling its raison d’être in the short- and medium-term.

There are caveats to Grenier’s numbers, as he himself points out. There is no guarantee that Québec solidaire and Option nationale vote would have necessarily gone to the PQ. Yet in a close three-way election, the two splinter parties almost certainly cost the PQ a majority, Grenier says. “In several cases, like in the Eastern Townships riding of Richmond, a couple hundred votes would have made the difference for the PQ.”

The 2012 election marks the first time in PQ’s history that the party has anything but a virtual monopoly on the sovereignist vote. While there have been other parties promoting the idea of a separate Quebec, most have had roughly the same success as Parti 51, which in the late 80s advocated Quebec’s annexation with the United States. The party received 0.11 per cent of the vote in the 1989 election and collapsed shortly thereafter, and with it the dream of Quebec becoming America’s 51st state. “The PQ hasn’t ever had real competition for the sovereignist vote,” Grenier says.

With its co-leaders elected to the National Assembly for the first time in the party’s six-year history, Québec Solidaire isn’t making any apologies for hindering the péquiste progress. If Quebec solidaire exists at all, says the party’s election coordinator, it’s because the PQ effectively deserted its left flank. “We didn’t see ourselves in the PQ of today,” says François Saillant, who is also a well-known housing advocate in Montreal. “There were major differences with the party. We wouldn’t have gone through the trouble of starting Québec solidaire if there we only had a few minor quibbles with it.”

Among the problems, according to Saillant, was the PQ’s rightward drift during Lucien Bouchard’s tenure in the late 90s, as well as its narrow view of sovereignty itself. Quebec Solidaire, Saillant says, sees the option more as a means to more progressive social, environmental and economic policy, rather than as an end unto itself. “Rather than blame us, the PQ should ask itself why it wasn’t able to present a platform that was inspiring enough to get a majority,” he says. “It’s not as if our voters would go to the PQ if we didn’t exist. They’d be orphans.”

The PQ has remained relatively mute on the subject. “We are still analyzing the results, so no one will comment” on the vote split, PQ spokesperson Manuel Dionne told Maclean’s. It is unclear how Marois’s minority government would follow through on a number of (highly divisive) campaign promises regarding so-called “identity issues” such as a secularism charter and an expansion of the province’s language laws. During the campaign, Marois herself said her hands would be tied in a minority government.

And then there is the issue of sovereignty itself. A poll by the CROP agency during the election pegged support for the issue at 28 per cent, a decrease of eight percentage points over a period of less than a month. And an embarrassment of choice for sovereignist voters has put Marois in a difficult position, forcing her to square her party’s hard line base with a forever-tentative Quebec electorate. She can only hope her reputation as Lady Concrete will serve her well once again.