The Putin regime would love for Canada to hand over this dissident Russian scientist. Ottawa can't let that happen 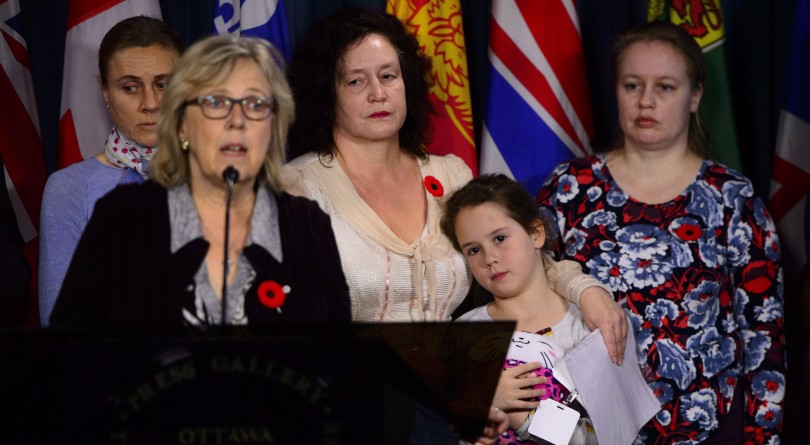 Green Party leader Elizabeth May calls on the federal government to intervene in the case of Elena Musikhina, middle back, who is seen holding her granddaughter Iaroslava (THE CANADIAN PRESS/Sean Kilpatrick)

For nearly three years, she’s had her asylum claim adjudicated, botched, dismissed, appealed and dismissed again. She’s now under orders from the Canadian Border Security Agency to show up for a Dec. 3 flight back to Russia, where in all likelihood what awaits her is arrest and imprisonment, or at the very least a living hell.

Her cause has been championed by Green Party leader Elizabeth May, former cabinet minister and human rights campaigner David Kilgour, University of Toronto international relations professor Aurel Braun and leaders from the Ukrainian-Canadian community. There is only one reasonable and decent resolution available to the torments endured by the 54-year-old Russian scientist-activist Elena Musikhina.

There’s still time for officials with Immigration, Refugees and Citizenship Canada (IRCC) to waive the convoluted and contested findings in her case to date, and to grant Musikhina and her husband Mikhail permanent resident status, on compassionate and humanitarian grounds. Alternatively, either Immigration Minister Ahmed Hussen or Public Safety Minister Ralph Goodale could exercise the prerogative of a ministerial intervention.

Just how a fairly straightforward refugee claim like Musikhina’s ended up such a mess is a story that cannot be wholly attributed to errors or assiduously procedural hair-splitting on the part of the refugee protection division, or the appeal division, of Canada’s Immigration and Refugee Board. There was a succession of lawyers. Affadavits weren’t filed on time. Deadlines weren’t met. In her testimony, and various submissions, Musikhina was perhaps not her own best advocate, sometimes straying into tangents and speculation that must have seemed paranoid.

RELATED: Putin is the new Stalin. Here’s why his poisonous gangland oligarchy will prevail

The thing is, if you fall afoul of the authorities and their shadowy gangland affiliates in and around Irkutsk and Lake Baikal in Siberia and the Russian Far East and you don’t end up a bit paranoid, then you’re not paying attention. It’s not just Russian opposition politicians and crusading journalists who have developed a habit of falling from the roofs of high buildings. Musikhina has every reason to be afraid of what might happen to her if she’s forced to return to Russia.

As a professor with Irkutsk Technical University, and during her work as a senior government consultant with a high security clearance, Musikhina had publicly expressed alarm about the ecological and public-security implications of certain military and industrial developments in the region. She ended up making quite a few enemies. An ally, Irkutsk governor Igor Yesipovsky, died in a mysterious helicopter crash in May, 2009. Several of Musikhina’s colleagues died similarly violent and mysterious deaths.

Musikhina’s prospects back in Russia would be bleak enough because of her protests against Vladimir Putin’s 2014 annexation of Crimea in Ukraine. In doing so, Musikhina violated Article 282 of the Russian Criminal Code, which purports to outlaw incitements to separatism. The Kremlin has already used Article 282 to put several people in jail for protesting the annexation and occupation of Crimea, even in cases of people merely sharing online essays opposing the annexation.

One of Musikhina’s difficulties in persuading the IRCCs refugee division of the validity of her claim was that she was left with the distinct impression that the university where she taught was assisting in the preparation of charges against her, based on statements she’d made to her students—but she couldn’t prove it. Neither could Musikhina prove that a member of Russia’s security police was present at a meeting to which university officials had summoned her—a meeting she hadn’t bothered to mention in her initial asylum claim forms. The refugee protection division noted a “negative credibility finding” as a consequence.

Common sense doesn’t appear to have played much of a role in the consideration of Musikhina’s fears for her safety back in Russia. Owing to the mere fact of her outspoken environmental activism, Musikhina would face the most dismal prospects.

“The message sent by the authorities’ recent treatment of environmentalists has been loud and clear,” according to Amnesty International. “Criminal prosecution of civil society activists has become their tool of choice to clamp down on critics.”

In 2012, the Putin regime passed a law aimed at silencing environmentalists by forcing environmental groups to register as “foreign agents” if they receive any public or private funding from abroad. At least 14 environmental organizations have since stopped working altogether, rather than continue to operate with a label that implies “spy” or “traitor,” according to Human Rights Watch.

Earlier this year, four activists with Environmental Watch on the North Caucasus were attacked and severely beaten in Krasnodar on their return from documenting illegal logging in a state forest carried out by a private firm intimately connected with senior government officials in the area, Human Rights Watch reports. Musikhina says the reason her colleague Evgeni Hamaganov was beaten to death was because of his efforts to protect Lake Baikal’s freshwater seal population.

Musikihina and her husband Mikhail arrived in Canada in December 2015. As their claims have rattled their way through the system, they have been living with their daughter and granddaughter in Gatineau, Que. Mikhail has been holding down a job as a labourer. Their son Alexei fled to Mexico, where he lives without permanent status. Even Musikhina’s lawyer from Irkutsk, Evgeniia Riu, is living as a refugee in Ukraine.

RELATED: Former U.S. ambassador to Russia on Putin: ‘He thinks we’re out to get him’

The Musikhina claim for refugee status was submitted Jan. 20, 2016. The claim was rejected on June 21, 2016. The appeal was filed in August that year and rejected in March this year. An application for a judicial review of that decision was filed with the Federal Court of Canada in June this year, and rejected in July.

An appeal to Immigration, Refugee and Citizenship Canada for compassionate and humanitarian consideration was filed on Sept. 30. Elena and Mikhail have been ordered to leave the country by Dec. 3. The IRCC says, no worries, a compassionate and humanitarian consideration process can continue even after the individual involved has been ordered deported.

Elizabeth May says if Hussen and Goodale don’t intervene, “they have the blood of this couple on their hands.” The University of Toronto’s Aurel Braun says Musikhina’s deportation “should offend the conscience of the Canadian people,” and the human rights campaigner David Kilgour says that if she is forced to return to Russia, “I have no doubt that Dr. Musikhina will never see her daughter and granddaughter again.”