Dennis Matthews: It's not just that the team's on a winning streak—it's the authenticity of a game that's come to represent the real Canada 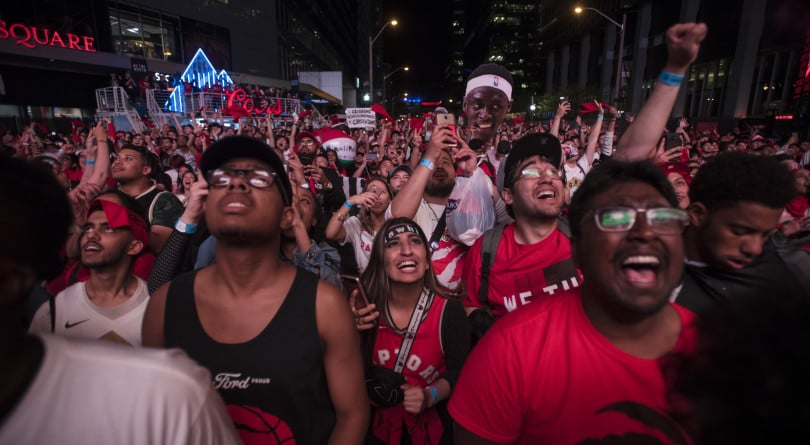 Fans celebrate in 'Jurassic Park' outside of Scotiabank Arena in Toronto on June 7, 2019. (THE CANADIAN PRESS/ Tijana Martin)

Dennis Matthews is a conservative strategist and commentator who is a vice president at the national communications firm Enterprise Canada. He served as an advertising and marketing advisor to former prime minister Stephen Harper.

The easy answer to explain why the Raptors bandwagon is gaining passengers by the day is to point to the wins. And they’ve played a part, no doubt. But it’s also undeniable that the Raptors—and, indeed, the sport of basketball itself—are having a Canadian moment that’s bigger than an epic playoff journey.

Corporations get this. Brands are jostling to get in line behind the team. First and foremost, because of what the NBA represents. It’s become the ultimate modern sports melting pot of fans: young, diverse, fast-paced, cat nip for those needing instant gratification. If you want to understand the next generation of voters and customers, start by understanding basketball.

They look a lot like the country. They’re from every race. Their families might not have the finances to get into pricey hockey. And they’re urban or suburban. This isn’t people with backyards that have room for a hockey rink. Many are apartment-dwellers who don’t even have a driveway for pick-up. But they get basketball. In schoolyards across the country, kids are trying to replicate Kawhi Leonard’s “shot”. And it’s likely, especially in the Toronto area, that the schoolyards where it’s most popular are in the most hotly-contested 905 ridings.

Naturally, enter the politicians. Nothing is more predictable than a politician jumping on a bandwagon. There’s nothing new, after all, about political leaders associating themselves with causes, groups and movements. If you’ve ever seen your local MP give a speech at a Rotary Club or march in the St. Patrick’s Day parade you know they’ll be part of anything with an audience.

READ MORE: Are you a Raptors genius? Find out now.

We’ve seen Andrew Scheer work the crowd at Scotiabank Arena during this playoff run. A video NDP Leader Jagmeet Singh shared from the game of Leonard’s now famous buzzer beater outperformed most of his usual content. Then there was Justin Trudeau’s memorable Instagram post of him and his son watching with a cold Dominion City Brew on his coffee table.

Yet this isn’t without risk. Sports fans haven’t always loved watching their elected representatives trying to steal a little of the limelight. Few things are more cringeworthy than seeing a politician fake it in a crisp never-worn-before jersey. Or the worst-case scenario of being present for a major loss, and thus the subject of an instant curse.

Few have navigated these waters better than former prime minister Stephen Harper. He too made an appearance during Game One of the NBA Finals in Toronto. But like always, he sort of managed to just blend into the crowd. The benefit of being an authentic sports fan from the curling rink, all the way to Scotiabank Arena. There’s a lesson there.

But it’s easy to give our politicians some latitude here, as the team has gone out of its way to conjure up a link with national pride. We The North indeed. The cadre of Raptors fans at the Oracle Arena in Oakland singing “O Canada” after the series of wins really drives this home. After all, Canada’s always had a bit of a thing when it comes to anything against the States—and the Raptors have managed to capture this.

So along with the politicians, big brands want a piece of all that. Take McDonald’s, with its widely publicized sponsorship deal with the Raptors that gives out free French fries in Ontario when the team scores 12 or more three-pointers in a game. It’s costing the Golden Arches an estimated $5.8 million though more than two million medium fry giveaways. But it comes with a catch tailor-made for the younger crowd the Raptors attract. You have to download its app to score the free fries, no doubt providing long-term value for the chain. It’s probably a bargain.

The winning and excitement from this Raptors run also masks what the league is getting right. Its priority areas to grow the game are China and especially Africa, the world’s fastest growing market for smart phones. It’s a good fit for a changing world.

Whether around the world or in Jurassic Park, the NBA understands it’s in the entertainment business. And that the fans are at the centre of it all, not simply the stars on the court. The fact the Raptors owners helped stand up other Jurassic Parks across the country is evidence of that. That courtside stars include the world’s most famous rapper makes the Six seem even more with it.

And finally, the authenticity of it all. The players seem a bit more real. There’s less packaging. Their backgrounds and life stories bring hope to kids on courts across the country. And around the world. Enter, Africans Pascal Siakam and Serge Ibaka. On a team excellently built by Masai Ujiri.

At the end of the day, brands—and politicians—look at Jurassic Park and want to be part of it. Because it’s the future of sport in this country and that’s not just because the Raptors are on a streak.