The reason that cannabis is now legal in Canada

It was the Prime Minister's late brother's brush with the law that influenced Trudeau's thinking on pot, and put Canada on the path to legalization 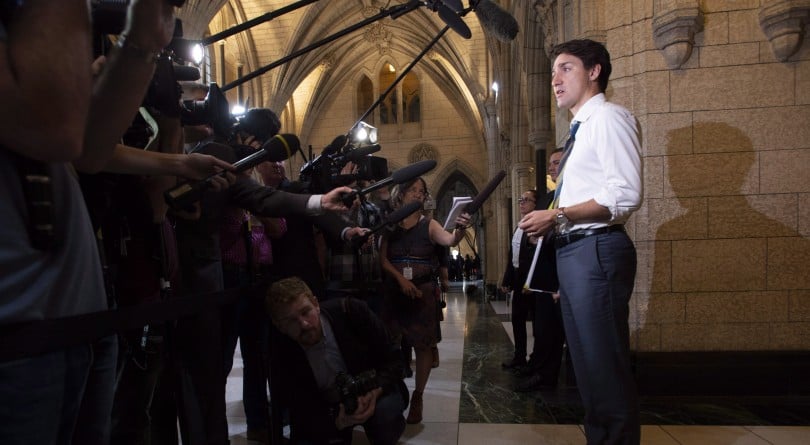 Prime Minister Justin Trudeau s reflected in a sign as he speaks with the media before attending caucus on Parliament Hill in Ottawa, Wednesday Oct. 17, 2018. (THE CANADIAN PRESS/Adrian Wyld)

It’s such a classic story that it’s literally a movie cliché: a young ski-bum type gets caught by the fuzz with a couple of joints rattling around in a tin in one of his pockets. There’s trouble coming to the young man, until his well-connected and well-resourced father swoops in for the rescue, connecting his son with an able attorney and disappearing the problem into thin air.

The young man, in this case, was the late Michel Trudeau, and his brush with the law occurred two decades ago. His powerful father, of course, was former prime minister (and lawyer) Pierre Trudeau. The incident reportedly influenced the thinking of Michel’s older brother, Justin, on marijuana, and eventually he was in a position to do something about it.

The Prime Minister related this family lore in an interview with Vice in April 2017, as his government was readying the legislation that would go on to make marijuana legal in Canada, as of today.

“He was very confident that we were able to make those charges go away,” he said of his father. “We were able to do that because we had resources, my dad had a couple connections and we were confident that my little brother wasn’t going to be saddled with a criminal record for life.”

READ MORE: What are the mental health risks of marijuana use?

Trudeau said this incident occurred about six months before his brother’s death in an avalanche during a backcountry ski trip in B.C.’s Kokanee Glacier Park in 1998. Michel was driving back to Montreal after a trip to the West Coast, and he got into an accident on the highway. As police were helping him collect items that had spilled out of his car onto the road, they discovered a Sucrets tin with a couple of joints inside it.

In telling this story to Vice last year, Trudeau framed it as illustrative of the inequality in how minor drug charges had been handled in Canada, and who had the ability to slip out from under them. “That’s one of the fundamental unfairnesses of this current system is that it affects different communities in a different way,” he said.

On Wednesday, when pot went legal in Canada, Trudeau’s government announced that it would craft new legislation that would allow people with simple possession records to request a pardon. “As of today, we have a new regime in which simple possession of marijuana is no longer illegal, and therefore we’ve put forward a process on obtaining pardons that is simplified, that will be free for people who have simple possession of cannabis criminal records,” he said. “This is going to make a real difference for people who have been impacted by the previous regime.”

However, there is no timeline yet for when these pardons will be available, or even when the government will table a bill in the House of Commons.