The Rebel Media-branded retirement savings fund is not happening

The Rebel Freedom Fund never launched, and the asset management firm that created it is now winding down its funds and closing 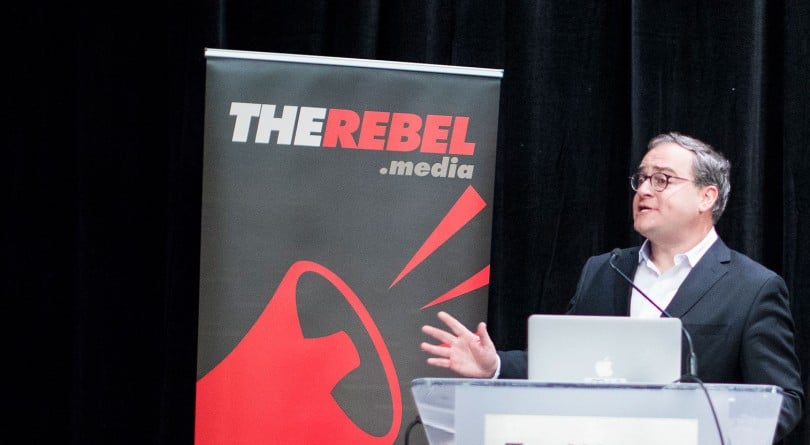 The financial firm that was setting up a fund to invest in Rebel Media’s output is closing down. Wells Asset Management, based in Lloydminster, Alta., in February announced the Wells Plus 6ix Rebel Freedom Fund, which would invest in “asset-backed debt obligations” and then put the proceeds towards “projects and opportunities” associated with the Ezra Levant-headed far-right outlet. But the firm’s proprietor says the fund did not ultimately launch.

In an investor notice dated June 12, 2018, and seemingly posted to its website on July 13, CEO and chief investment officer Dale Wells said he had decided to wind down the funds managed by the firm, stating that “we have no alternative but to recommend you transfer your account to another firm.”

In the notice, Wells said his decision came about as a result of National Bank Independent Network (NBIN), a division of a subsidiary of the Montreal-based financial institution, “terminating their custodial services,” as well as “a recent overture by the Alberta Securities Commission [ASC] that would effectively force us to close.”

Wells did not elaborate on the reasons for NBIN’s termination of services or the nature of his interaction with the ASC, in response to questions about the two institutions as well as the Freedom Fund. “It appears as though you are looking for a ‘Rebel’ story,” he wrote in an email. “I will confirm to you that the Rebel Freedom fund did not ever launch.”

The NBIN and ASC did not provide details about their dealings with Wells Asset Management by publication time. In its note to investors, the firm stated in all caps, “your investments are currently in good standing. There are no investments within the funds that we have any concerns with.”

Levant did not directly address questions from Maclean’s, including whether he was aware of the winding down of Wells Asset Management’s funds, whether the Freedom Fund had launched and whether it had invested in any Rebel Media projects, whether the winding down of the fund would affect the company’s ability to pursue future projects, and whether he was planning to work with another asset management firm to create a replacement to the Freedom Fund. “Internal business matters at the Rebel are confidential,” he wrote in an email. “The fund to which you refer is a project of Wells Asset Management.”

He went on to say that Rebel is “100% independent and funded by our viewers,” that it has a larger audience than Maclean’s, and that it is the Rebel’s “policy never to never [sic] accept government bail-outs, forcibly extracted from unwilling taxpayers,” referencing the funding Maclean’s receives from “the Trudeau government’s Canada Media Fund.” (The correct name for the program is the Canada Periodical Fund, and it was established through a consolidation of existing programs by the Stephen Harper Conservative government in 2009.)

Speaking to media around the time of the planned Freedom Fund launch, Wells said he shared Levant’s views on a number of issues. “It sits well with my personal agenda,” Wells told Vice. But the Rebel proprietor would have nothing to do with the running of the investment opportunity, the portfolio manager said. In addition to being loaned money, the Rebel was scheduled to receive a 2 per cent licensing fee for the use of its name on the financial product.

RELATED: Why the Rebel’s yell won’t be stifled so quickly

Right-leaning politicians and commentators have distanced themselves from the Rebel over the last year following a series of their hosts claims and actions. Former Rebel personality Faith Goldy was let go by the outlet in August 2017 after appearing on a neo-Nazi podcast. She had previously promoted a conspiracy theory about the Quebec mosque shooting. Other prominent hosts like Lauren Southern, Gavin McInnes, and Pizzagate conspiracy theory propagator Jack Posobiec departed last year. The Rebel later brought on Katie Hopkins, whose contract at the Mail Online was not renewed following more than one settlement with people who alleged she had made false claims about them, and who promotes the white genocide conspiracy theory that immigration and multiculturalism are intended to make white people a minority such that they can then be assimilated and persecuted.

The minimum investment necessary to invest in the planned Freedom Fund was $5,000, and the fund was eligible for inclusion in Registered Retirement Savings Plans, according to the fund’s website, which was still live as of the publishing of this story. Per media reports, the fund was “targeting” a 4 per cent return, which would come from the interest payments on money loaned to Rebel Media for its projects. The fund could also have invested in “other vehicles, projects and instruments.”

Wells had been involved in entertainment financing before, notably investing in the Denzel Washington-starring Fences. In 2010, the Investment Industry Regulatory Organization of Canada found he had been acting as an advisor without being registered as one. Wells told MoneySense in February 2018 that he disagreed with the ruling, but “respects the decision.”

Levant solicits subscriptions and donations from watchers of his and other Rebel personalities’ videos, as well as on the outlet’s website. Vice last year reported two former staffers’ estimation that the company has annual subscription revenues of $1 million. The website also carries advertising. The Canadian arm of anonymous collective Sleeping Giants has mounted a campaign to have companies pull their ads from the Rebel, as it has with the alt-right outlet Breitbart. Some 305 had done so, Sleeping Giants told Vice in August 2017.

On Tuesday, Levant posted a number of tweets about Sunday’s shootings on Toronto’s Danforth Avenue. They included calling suspect Faisal Hussain a “Muslim terrorist” despite the fact that police and security services have yet to make any announcements as to his intent or motivations. He also questioned the timing of the release of Hussain’s name and a statement from his family describing his “severe mental health challenges,” specifically targeting a South Asian CBC reporter for reporting the statement, despite the fact that a number of other journalists had done so just before or around the same time.

The Freedom Fund’s website noted that since the investment device had no track record, a direct measure of risk could not be ascertained before launch. Wells acknowledged at the time of its announcement that Levant himself could be a risk factor. “If Ezra says something inappropriate on any given day then [The Rebel’s] cash flow could change in five minutes,” he said at the time.