The Royal Canadian Navy to the rescue! (Yes, really.)

Image of the Week: A high-seas rescue by crews returning from naval exercises captures the perils of their work, and the ferocity of the North Atlantic 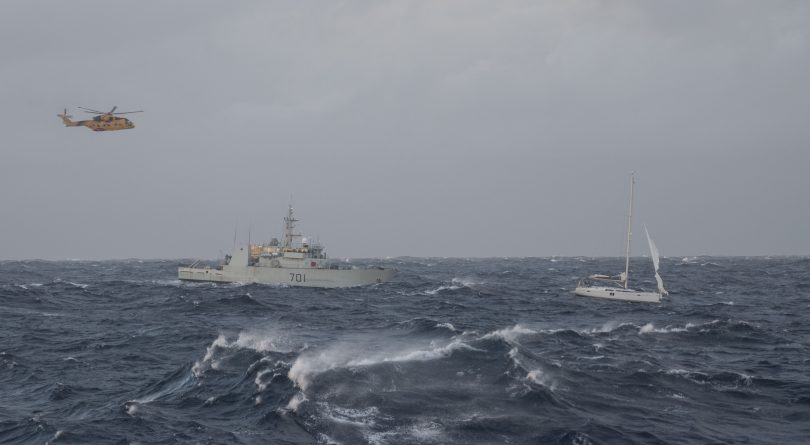 The sun radiated low on the horizon of a choppy Atlantic Ocean when the rescue team spotted the endangered yacht. Waves crashed around the disabled boat, the Makena, whose shredded sail flew in winds racing up to 75 kilometres per hour. A storm looked to be approaching. The crew didn’t seem ready for this: the Dutch family that previously owned the Makena sold it to a buyer in Toronto, hiring four British men to deliver it across the North Atlantic in December. After stopping briefly in the Canary Islands, the crew set sail for Canada, but something went wrong, stranding them on the high seas. A blogger for Halifax Shipping News reported that the crew didn’t have survival suits, and questioned why anyone would sail through the ice-covered St. Lawrence River in December. Not that they got that far. Around 440 kilometres southeast of Halifax, two Canadian naval ships—HMCS Summerside and HMCS Glace Bay—happened to be passing nearby, returning home from a four-month deployment in Europe. Together with Canadian and U.S. air support, they were called in for a lengthy and risky rescue mission, saving the four men’s lives and having their efforts immortalized in the dramatic photograph above.