Royal tour 2016: When protocol goes out the window

Dispensing with regal etiquette, the Yukon greeted the Duke and Duchess of Cambridge with natural warmth and beauty

Yukoners, in three local legs of the 2016 Royal Tour, all but threw regal protocol out the window.

Admittedly, a few did address the visiting monarchs as “Your Highness” while the pair toured the Yukon Territory. But only a couple bothered to remove their hats or toques in their presence. And not one, God love them, attempted a bow.

It was all a bit much for the travelling pack of British reporters. They gasped audibly when Gwen Wally, a member of the Carcross Tagish First Nation grabbed the duke of Cambridge in a giant bear hug this afternoon, in the tiny mountain town of Carcross.

“I love you. I loved your mom. I’ve been watching you since you were little,” Wally, 48, told William, who smiled, at once moved and embarrassed. Wally then wrapped her arms around his wife, Kate, in an intimate squeeze lasting several seconds.

“They’re just like us people—family-oriented, warm,” said Wally, adding that her Tlingit name, Lanatk, means “I wait for the right opportunity.” “Plus I seen my auntie Sue give them a hug. As soon as I seen that, I was in there like a dirty shirt,” she said, exploding in laughter.

“Us Tlingit, we’re a huggy people,” her aunt, Susan Ganes added with a shrug, unfazed by the stir she’d created. 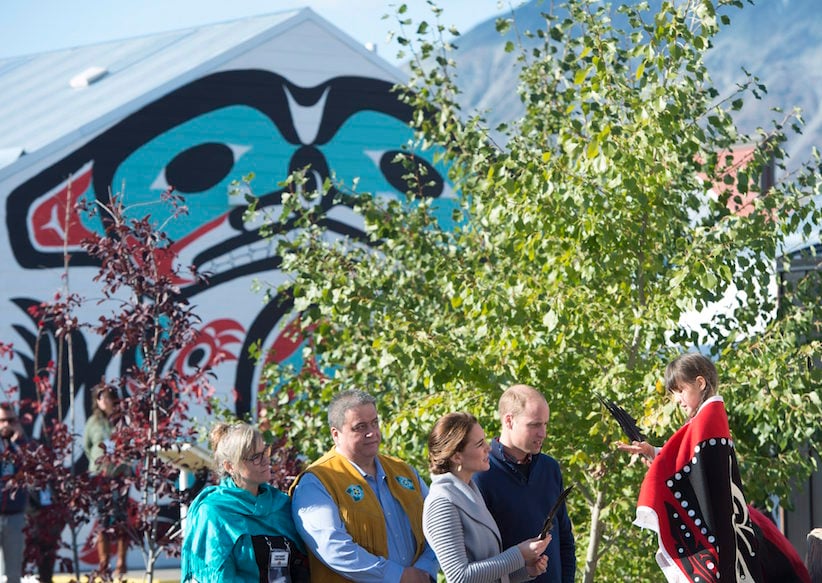 The Duke and Duchess of Cambridge receive a eagle feather from a young girl in Carcross, Yk, Wednesday, Sept 28, 2016. THE CANADIAN PRESS/Jonathan Hayward

For the trip to Carcross, a winding, 70-km trip down the Klondike Highway south of the Yukon capital, Kate ditched the fire-engine red Herrera coat she’d worn to a Whitehorse street festival that morning. After a quick stop at the $128-a-night High Country Hotel where she and William spent the night, Kate changed into a pair of chocolate brown, high-heeled cowboy boots; she paired it with a steel grey, belted, alpaca wool sweater by Sentaler, a homegrown designer favoured by Sophie Grégoire Trudeau.

In Carcross, the royal couple were greeted with a killer whale (Dakh’lawêdi) clan song, by the Carcross Tagish First Nation before heading up Montana Mountain; over the last decade, the Tlingit nation has crisscrossed the mountain with 65 km of mountain bike track, creating a major tourist draw and a magnet for local youth.

The town of Carcross—and especially the snow-white St. Saviour’s Church—will be instantly recognizable to anyone familiar with the Yukon artist Ted Harrison. Carcross, like Harrison’s work, is all Windex-blue skies, swerving valleys, and giant, kaleidoscopic mountains. Poplar, which have gone fluorescent yellow with the early, Yukon fall, sprang from the deep green pine forests like something out of a Harrison painting.

But even though St. Saviour’s still stands, Carcross looks nothing like it did when Harrison, who died last year at 88, first arrived in 1968 to teach at the local school. The former mining hub near the B.C. border has been booming ever since cruise ships began stopping in Skagway, in neighbouring Alaska. These days, it’s not uncommon for as many as 18 tour buses to descend on Carcross all at once.

Atop the mountain, members of the Carcross Tagish Nation kept a roaring fire alight, serving finger sandwiches and hot tea in fine bone china to young mountain bikers on hand to demonstrate their chosen sport to the visiting royals. Bedouin Soundclash and Taylor Swift pumped from a set of speakers hastily hung nearby. A curious raven circled above.

Originally, the royal couple had been scheduled to visit a spot nearer to the base of Montana Mountain. But after inspecting the site this morning, William’s press secretary pushed the event halfway up the mountain, where photographers might better capture the snow-capped, surrounding mountain. He needn’t have bothered.

It was as Harrison once said: “The North is a special sort of symphony. Its landscape is a dance, the wind is an orchestra, and the cry of the birds are high notes in the background.”