The Tofino disaster: Inside the rescue effort

Every boat within striking distance rushed to the scene, searching for hours, while locals opened their doors to survivors 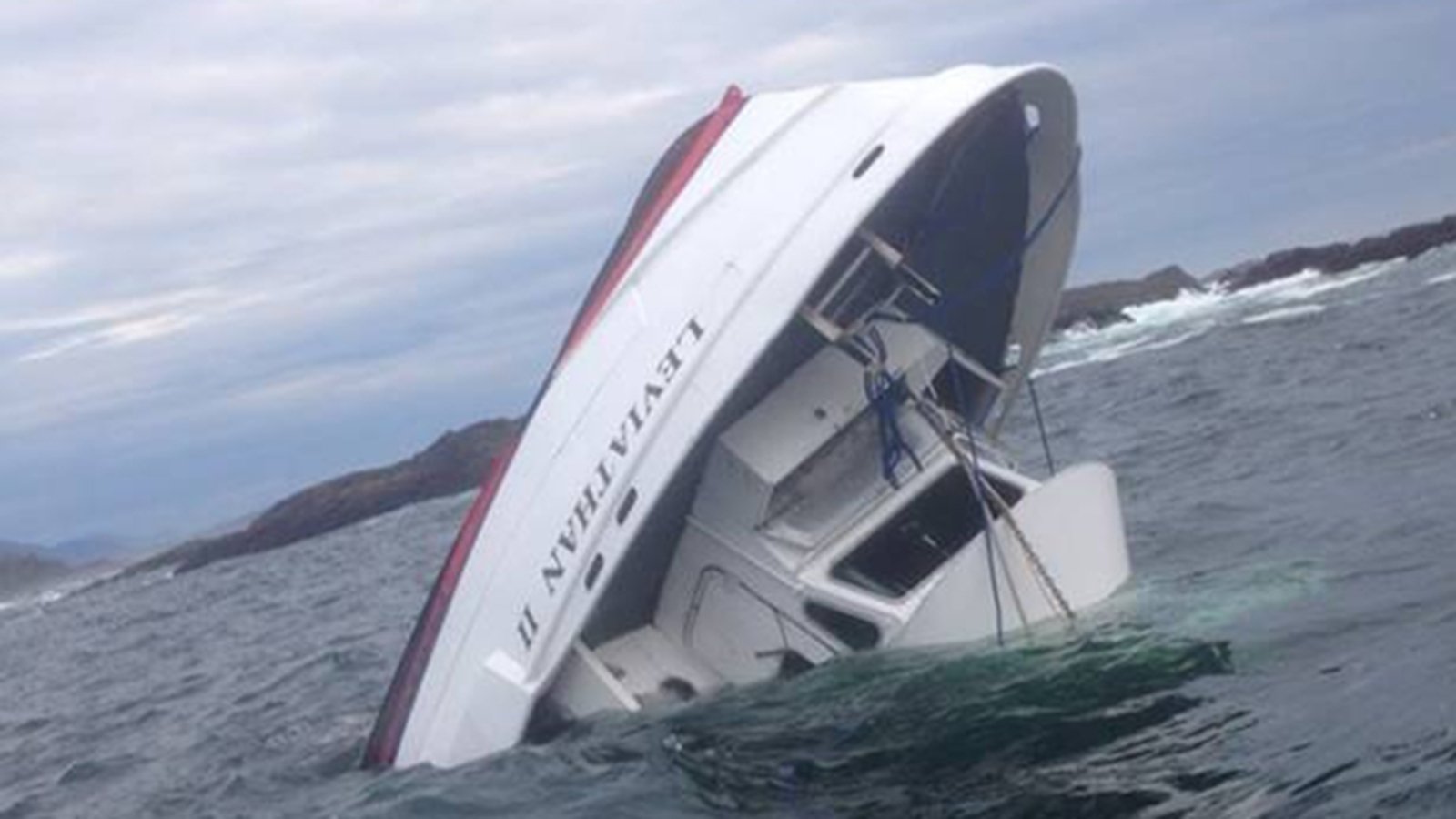 Five Britons are dead after a whale watching boat with 27 people aboard sank near the tourist town on the west coast of Vancouver Island. One person remains missing. The survivors were rescued by community members who rushed to the scene.  The five persons were all British nationals and all were passengers aboard the boat, not crew members. Three were tourists vacationing from Britain, and two were currently residing in Canada while retaining their status as British nationals.  The age range of the deceased is from 18 to 76 years of age.

Desilets was among the rescuers. The 37-year-old, his wife and child were heading home after a beautiful day at Hot Springs Cove, in the Maquinna Provincial Park, 45 km upcoast. Desilets had taken a rare day off. “It’s ironic, but we had one of the best days of the off-season. We took a picnic and soaked in springs for a couple hours.”

This is the second fatal accident for a boat operated by Tofino-based Jamie’s Whaling Station. In March 1998 a passenger and the operator of Ocean Thunder died when it swamped and rolled, throwing all four people aboard into the near Plover Reefs, the same area where the Leviathan II sank Sunday afternoon. In the earlier tragedy, the boat rolled so there was no time for the operator to transmit a mayday message. Two passengers were rescued after two hours.

“All wore coverall PFD (personal flotation device) suits; while the passengers’ suits were properly worn, the operator’s suite was partially zipped,” a Transportation Safety board investigation later reported. “A factor contributing to the occurrence was that the operator did not fully appreciate the conditions the boat would meet at the time of the accident in the turbulent waters in the vicinity of reefs,” the report said.

In this case, the larger 20-m Leviathan II transmitted a mayday call, and boats from Tofino and the nearby Ahousaht reserve were quickly on scene. The Desilets were just pulling up to the town docks when the emergency call came through the radio: The Leviathan II was on the rocks off Plover Reef, west of Vargas Island. “I offloaded my family, grabbed a couple friends and went to the scene.”

When he arrived at the scene, roughly eight nautical miles northwest of Tofino, two boats were leaving with passengers from the Leviathan II; some were dead, some were alive, he says. “And five people were still missing and unaccounted for. So we scurried for two hours, searching, and pulling debris aboard.”

A Coast Guard helicopter was flying above, organizing search patterns for each boat on the water.

Desilets  and seven other boats searched for two hours before he had to return to town to get gas. Another five boats showed up as he was leaving. “There was no shortage of help. Everyone with a boat within striking distance of the scene was there.”

Desilets pulled in purses, lifejackets, backpacks. He saw no sign of children’s belongings.

“It had to have hit a rock—that’s speculation, I’m not an expert investigator. But given the location of the boat—just off the reef—and its position—only the top 12 feet of the bow was sticking out—it had to have hit a rock. Either it had engine failure, or the driver got too close to the rocks. The captain, Desilet says, is “a great guy, an older gentleman with lots of years’ experience on the water.”

The scene was chaotic, with waves crashing and the dull, thump, thump of the chopper above. “But all I could hear were the radio chatter,” says Desilets. “We were trying to tune everything else out, to concentrate on the radio, on finding the missing. We were in constant communication with the other boats in the area,” he adds. “Could you search this area—there’s something floating.” ” The mood was “very somber,” very grim.

They knew that for those in the water, every minute mattered. It’s currently 12 degrees Celsius offshore, and a few degrees colder in the open Pacific. Survivors would have gone into “cold shock,” which causes immediate hyperventilation, triggers the gasp reflex, according to research by Gordon Giesbrecht, a University of Manitoba professor who studies the body’s response to cold water. Survivors would have been struggling to breathe regularly, which can trigger hypertension and lead to sudden death.

John Forde, who runs the Tofino Whale Centre, who was assisting with the rescue Sunday, says that a large ship like the Leviathan II wouldn’t  require that passengers wear lifejackets at all times.  “On our boats and all the open vessels—Zodiacs or smaller ships—everyone is in a Mustang floater suit, or a survival suit. But on the larger boats Transport Canada rules are that you have to have a certified life jacket for every passenger—it’s like on the ferry or a cruise ship. But the certified lifejackets are those big keyholes—nobody really wants to wear them. And unfortunately, it’s the cold that gets you.”

In a simple lifejacket, the cold water makes it hard to keep your head above water. The muscles grow increasingly weak, because the blood is rushing from the extremities to body’s core, to try to protect the heart, Giesbrecht said. In the hands, where blood circulation is negligible, this leads to “finger stiffness, poor coordination of gross and fine motor activity, and loss of power,” according to Giesbrecht’s research. Even those pulled from the water yesterday afternoon were still at risk of long-term hypothermia, as their core temperature would have continued to drop long after they were removed.

Hypothermia was the suspected cause of death in the Leviathan II tragedy, as was the case in the Ocean Thunder accident. In that case, the sea water temperature was 11.5° C. Studies of cooling rates for an average adult holding still in ocean water of 11.5° C (wearing a standard lifejacket and light clothing) show a predicted survival time of about 1.8 hours,” the safety board report estimated. “The board is concerned that, because the current regulations do not reflect the need for thermal protection, mariners and passengers on small vessels and small fishing vessels may be exposed to undue risk of hypothermia. The board will continue to monitor the life-saving carriage requirements with a view to ensuring that these take into consideration both flotation and thermal protection capabilities, and thereby provide mariners and passengers a reasonable chance of survival in cold Canadian waters,” the report concluded.

James Bray, owner of Jamie’s Whaling Statement, released a brief statement early Monday. “Our entire team is heartbroken over this incident and our hearts go out to the families, friends and loved ones of everyone involved.”

As soon as Tofino Mayor Josie Osborne got the yesterday around 4 p.m., alerting her to the accident, she reactivated the city’s Emergency Centre above the Fire Hall to coordinate search and rescue efforts.

There, the mood was “definitely very somber, and a little bit tense as events unfolded,” Osborne says. “Slowly we were being given news of how many died: First two, then three, then four, then five… It quickly goes from bad to worse and worse. It gets to a point where you are grateful there are any survivors at all.” (One person is still unaccounted for, Osborne added; “and at this time there are no updates.”) For the mayor, this was about the worst day she could ever imagine. “Nothing prepares you for it.”

Once the boats began delivering survivors to the community docks, the tiny community ran into a problem: The 18 survivors all needed medical assistance. But the local hospital only has 10 acute care beds. “It just wasn’t possible to deal with everyone at once,” says Osborne. So “private homes were opened up,” along the hospital route, she says. “So people could be warmed up and fed and just be with people—to begin recovery.” She doesn’t quite know how it happened: “In a tiny community, she says, “things are a bit serendipitous that way.”

Indeed, Osborne says there has been an outpouring of offers of support from businesses and locals: “So many lodges, hotels and B&Bs have stepped up and said: “If you need my space, it’s yours.” Restaurants are meanwhile offering food; and retail stores have donated clothing and blankets. “And then the most important thing,” Osborne adds: “That human presence, just being here for everyone.”

Michael Harris, Seattle-based executive director of the Pacific Whale Watch Association said there will be lessons to learn from this tragedy. That organization’s 36-member companies, half of them Canadian, operate in inland Pacific waters but not the open ocean conditions like Tofino. Many of the association’s naturalists, however, also work boats in Tofino and elsewhere. “I promise you that every single whale watch company in our association is watching this story very, very carefully,” Harris said in an interview. “We are standing by to help in any way we can.”

It doesn’t matter where whale watch boats operate, Harris said, “you’re still out in the ocean, that’s something we are keenly aware of in the inland waters, is to never get complacent. We’re not saying they were complacent,” he said. “I would suspect that the safety training for people on the coast is on the level of ours and possibly even exceeding ours in some cases because of the environment they work in.”

He said his association members have operated for 25 years without a single tragedy. “We just have this culture, we’re not conducting an amusement park ride. We’re teaching reverence for wildlife. The first order of business is to educate people that we are no longer in your home, we are in their home. We need to respect their home, but also respect the ocean.”