Jen Gerson: The tax is a rare gift that crystallizes concerns and anxieties of many voters, uniting conservative provincial leaders against the Trudeau government 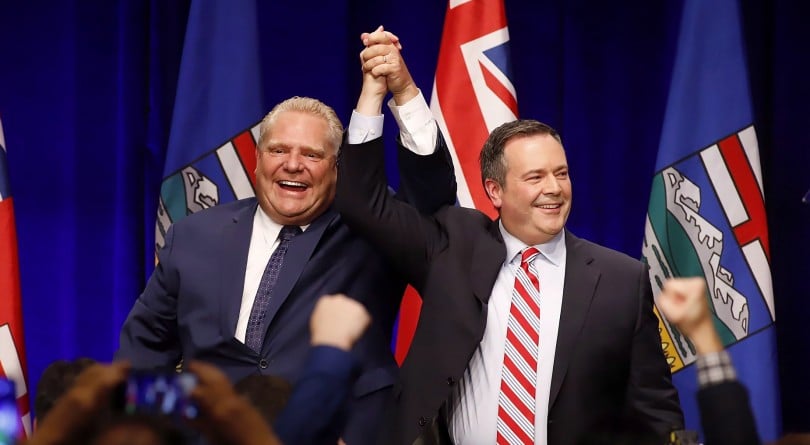 Sitting at the back of Jason Kenney and Doug Ford’s “Scrap the Carbon Tax” rally, it became clear how this is all going to work.

It’s the Friday night before the long weekend and a windowless conference hall in downtown Calgary is standing room only, more than a thousand people inside. Another 200 were locked out because the fire code demands it, organizers said. This is not quite the usual crowd that tends to fill halls of Conservative Party rallies in the big city. It’s a bit more baseball caps, black T-shirts and a few earnest Smithbilts; indeed, supporters have been bused in from Medicine Hat, Fort McMurray, Grande Prairie—even Edmonton.

Several are asked to put away or redact their bright red “Make America Great Again” caps. One complies by covering it with an “I love Alberta oil” sticker.

Many of these people are from the oil patch directly, or have livelihoods connected to the industry in some way. They’ve struggled for years now. They are angry. They see a provincial NDP in league with a federal Liberal government set on indefinitely delaying or squashing the construction of crucial bitumen pipelines, of shutting down the province’s wealth altogether. The carbon tax is a tax, first of all, so easy to oppose. Worse, it was brought in with the promise that playing nice with Ottawa would secure pipeline construction, kick starting the economy.

No pipeline: no tax. It’s a simple rallying cry.

Jason Kenney takes the stage as the opening act and he is on point as ever I have seen him. I’m tempted to say that he had a restorative shot of tequila before taking the podium, but with him, it’s more likely to be a good stiff tea.

He lays out the anti-carbon tax case: It’s proved ruinous to a scrappy senior’s centre north of Calgary. NDP Premier Rachel Notley has failed, with this tax, to get a pipeline built with her “close friend and ally Justin Trudeau.”

“They want to discourage us from doing some things that politicians don’t approve of—like heating our homes,” Kenney says. “And filling up our gas tanks to drive to work.”

The United Conservative Party leader scoffs at Notley’s suggestion that citizens can reduce the carbon tax burden by taking a bus or walking—tell a person in Pincher Creek to take a bus. Ask a person to walk from Camrose to Calgary in the depth of winter.

“Folks, this is not a vice. It’s not something that should be punished. And, by the way, it doesn’t work, because you can only turn down the heat by so much at home when it’s 30 below outside,” he says.

He pivots to Pigouvian taxes and externalities, but quickly recovers from this momentary lapse into wonkery.

Jason Kenney delivers a fine speech, but it is not him not who this crowd is here to see.

They want “a man,” Kenney says, “who stood up to the elites even in his own party, to reverse their commitment to a carbon tax. A man who is a champion of our resource industries and jobs, a great ally of the West, and of Alberta, who is now in our corner.”

The Ontario premier ambles on stage with a big grin.

“We spoke to the whole country of the importance of standing against politicians, against the elites who oppose the development of natural resources that allow provinces like Alberta to contribute to Canada’s prosperity,” he says.

Ford is not a talented orator. He frequently stumbles and makes mistakes—once accidentally referring to his friend, Jason “Kennedy”. But he is affable and concise and, if not particularly good at the podium, perhaps that makes him more relatable.

He’s there to ensure Alberta, and Canada are open for business. This earns him cheers, and multiple standing ovations.

“We hate Trudeau” the crowd chants. “Build the pipeline” they say.

Fewer than 20 protestors stood outside the conference centre prior to the rally. One held up a sign: “No Kenney, No Ford, No Fascism.”

But Jason Kenney and Doug Ford are not the same—and to conflate the two is to miss, entirely, what is going to happen, here.

Firstly, antipathy to the carbon tax is being used to forge an alliance among conservative premiers and would-be-premiers across the country. A day before his Alberta rally, Ford gave a press conference with Saskatchewan Premier Scott Moe, who first launched a court challenge against the federal carbon tax; Manitoba’s Brian Pallister this week also announced his plan to scrap its carbon tax, despite previously receiving a legal opinion stating that a bid to fight the federal government on this front would likely be futile.

In late August, Kenney appeared with New Brunswick PC Party leader Blaine Higgs, who swore to join with Saskatchewan and, now, Ontario by opposing the tax in court.

No doubt this crew has high hopes for the newly elected Coalition Avenir Québec, though it so far seems committed to maintaining the province’s cap-and-trade regime.

It’s rare to see so many provincial leaders unified on a policy point in opposition to Ottawa.

Ordinarily, grievances are regional. A federal policy that hurt one region is often of great benefit to another, which leaves Ottawa with the plum position of playing one province off the others for votes.

The carbon tax, then, is a rare gift. Conservatives from Prince Edward Island to British Columbia can loathe it equally.

Better, the tax crystalizes so many other priorities and concerns; fears for the economy, high unemployment in resource regions, perceived mismanagement of the pipeline file, antipathy to the oil and gas sector, out-of-touch liberal elites, years of frustration—of a sense that those in less generously electorally endowed regions just can’t get ahead, and are never meant to.

A carbon tax is an elegant thing to rail against. As simple as “Make America Great Again.”

Kenney and Ford are dissimilar creatures and, at first, it seems strange that they would share a stage: Kenney is a wonkish, Burkean conservative who has spent most of his life in Ottawa. Ford is a straightforward populist.

But Ford gives Kenney something that no Alberta Conservative has had in recent memory—a true central Canadian ally. With Ford gluing this alliance together, pipeline politics are no longer a mere regional grievance. Ford hails from belly of the beast itself; he could force a conversation on carbon taxes and resource development that might otherwise be dismissed as more Alberta griping.

On the very day of the rally, the National Post published an excerpt from former Conservative Prime Minister Stephen Harper’s upcoming book.

Harper points out that the populist movements creeping across the world are neither confined, nor temporary. Globalism has spawned a discontented underclass; parties must adapt by finding a way to tap that discontent without losing sight of their own ideological tenets.

“I call this approach ‘populist conservatism,'” he writes.

“Populism will be with us as long as working men, women, and families continue to face current economic and social pressures, and conventional political parties do not adapt. And if they do not, troubling elements of the populist agenda could prove more potent in the hands of more focused political operators.”

Conservatives have to give voice to the rage, and find solutions for it—while weeding populism of its most potent and pernicious elements, like racism, sexism and xenophobia.

Come to the rally, but leave the red hat at the door, please.