The unsafe country to our south

The Trudeau Liberals were afraid to break an asylum deal with an anti-refugee White House. A Canadian judge did it for them. 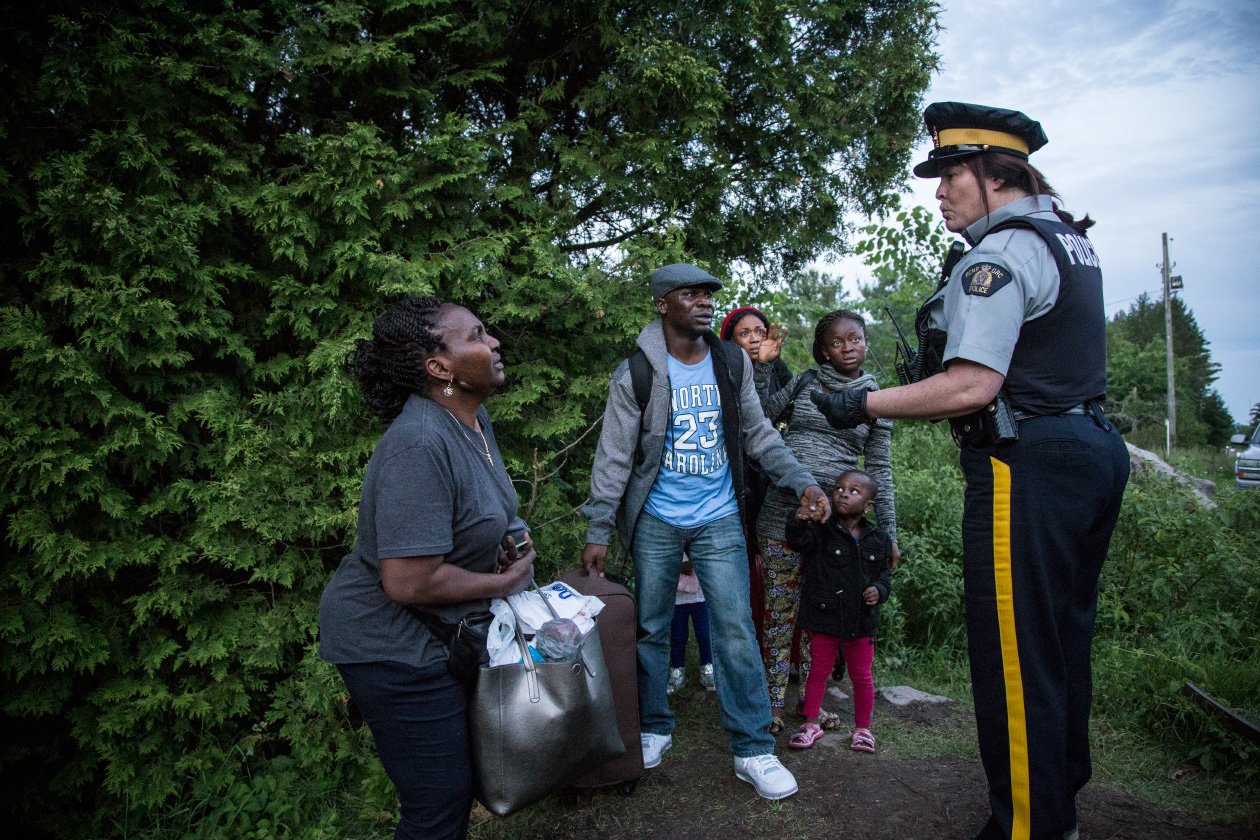 A group of seven people from Nigeria are informed in July 2017 by an RCMP officer of their rights and the law they're breaking by crossing illegally from the U.S.A. into Canada at Roxham Road, Que. (Photograph by Roger LeMoyne)

With Wednesday’s ruling in federal court, Canada’s fraught asylum pact with the United States stands to expire next Jan. 22. That’s two days after the presidential inauguration, which, based on current forecasts, would usher in a new U.S. leader who has opposed the hellish system his predecessor inflicted upon those seeking protection as refugees.

But advocacy groups were pushing long before Donald Trump became president to scrap the Safe Third Country Agreement (STCA), which let Canada turn away asylum seekers who showed up at land border crossings—yet created the quirk of law where tens of thousands of migrants have simply walked into the country at places like Roxham Road in rural Québec, skirting the send-’em-back deal.  In fact, Amnesty Canada and other groups that won in court Wednesday had also gotten the STCA declared unconstitutional in 2008, only to watch the Federal Court of Appeal reinstate the law.

It was always a problematic deal, made worse by a U.S. administration outwardly hostile to asylum seekers and a president who has variously slurred them as criminals and rapists, or losers from “sh–hole countries.” But Canada’s Liberal government never leaned in the direction of scrapping the deal. Instead, it spoke of tightening it, pushing even more refugee claimants back into the caprices of the U.S. immigration system. Rather than offend the brutish neighbours to the south, Ottawa now has a more diplomatic solution to stop irregular border crossings: sit back while a court calls turning migrants over to the Americans unconstitutional and contrary to the Charter of Rights and Freedoms.

From the outset, the deal stood at odds with Canada’s oft-professed image as a haven for refugees. While the Conservatives pilloried Justin Trudeau for tweeting that sort of message at the height of panic over Trump’s travel ban on Muslim-majority countries, the PM’s government stubbornly kept in place this policy that made it much harder for asylum seekers to get a fair hearing in Canada.

The agreement was created nearly two decades ago by Jean Chrétien’s Liberal government, in hopes of limiting the influx of refugee claimants by closing off ports of entry to them on Canada’s southern border. And it worked for a while. Asylum claims by 2005, the deal’s first full year, dropped to 20,000, down more than half from the year of the 9/11 terrorist attacks. (Refugee claimants can still arrive by plane or sea, and thousands do every year.) Claimant levels ebbed and flowed after that, until 2017, when Trump assumed office and it became widely known that migrants could traverse fields in Manitoba, or a ditch on the New York-Québec line, to obtain temporary access to Canada and (eventually) a refugee board hearing.

The inflow of refugee claimants has surpassed 2001 rates every year of Trump’s presidency, hitting 64,050 last year. (As with everything, the numbers in this pandemic year will be different.) That’s in large part owing to the irregular border crossers, because what good is a rule that blocks people from using Canada’s front door when everybody knows that, just around the side, is a makeshift hollow door frame?

Justice Ann Marie McDonald didn’t weigh in on the so-called loophole in striking down the agreement. Rather, her ruling considers the plight of migrants who tried seeking asylum at legal border crossings, and were turned over by Canadian authorities to U.S. counterparts, who summarily locked them up. In particular, the judge considered the plight of Nedira Jemal Mustefa, an Ethiopian woman who feared violence against her ethnic group back home. After she attempted to claim asylum at a legal Quebec border crossing, Canadian border officers returned her south, where she spent four weeks in a prison, the first week in solitary confinement.

RELATED: Why race and immigration are a gathering storm in Canadian politics

“Canada cannot turn a blind eye to the consequences that befell Ms. Mustefa in its efforts to adhere to the STCA,” McDonald writes. “The evidence clearly demonstrates that those returned to the U.S. by Canadian officials are detained as a penalty.” That’s contrary to the spirit and intent, the judge adds, of the safe country agreement and the international refugee conventions that underpin Canada’s asylum system—as well as Canada’s Charter.

Initial detention for refugee claimants was in U.S. practice before Trump, but became far more routine after he took office, says Ruby Robinson of the Michigan Immigrant Rights Center. Add to that myriad other reforms Trump made to limit and prevent successful U.S. asylum claims, including restricting the ability of those fleeing gender-based violence to get refugee protection. “We could talk for six hours in terms of the ways in which this administration has gutted the U.S. asylum system, in violation of both statutory law, constitutional law and international law,” Robinson says. The Canadian federal judge did not consider any Trump-era new rules, having already deemed as unconstitutional the act of shipping Canada’s asylum seekers into near-certain detention.

The Trudeau government could seek to overturn the ruling on appeal, in hopes of still being able to ship back those who try to cross at legitimate border posts, while being unable to do so at “irregular” crossings. Should Ottawa let the pact end, this January or sooner, it won’t necessarily trigger a surge in new asylum claimants into Canada, as migrants were already flocking from all over the United States to Roxham Road, notes Janet Dench of the Canadian Council on Refugees, which joined the fight to overturn the accord. It might simply disperse them to major border points like Windsor and Niagara Falls, where there has long been an orderly appointment system for asylum seekers with relatives already in Canada (a longstanding exemption to the STCA). Such a scenario might actually please Trump, because it means fewer migrants in the U.S. system.

Conservative leadership candidate Erin O’Toole reacted to the decision by decrying the prospect of turning “every border crossing into Roxham Road.” While trawling for party leadership votes with hyperbole, O’Toole revealed that the true animus for the irregular border-crossers wasn’t the seeming chaos of it, but the very fact that foreigners were claiming asylum in the first place—”jumping the queue,” as right-wing reactionaries say, while people applying for refugee status at camps wait their turn overseas. Atrocities and violence across several decades of global history have made clear why Canada is one of many countries that affords people who manage to reach its shores a shot at protection. Whether the migrants do so at border stations, or are forced to do so across ditches, they hardly deserve being turned over by Canadian authorities to another nation’s detention system. But if folks like O’Toole reject the whole idea of giving them a chance to seek protection in Canada, that’s a whole different battle.