The vaccine resistance problem in Canada, and how to confront it

Stephen Maher: Increasingly vocal vaccine resistant groups will make it harder to stamp out the virus. Is enough being done to try and reach them? 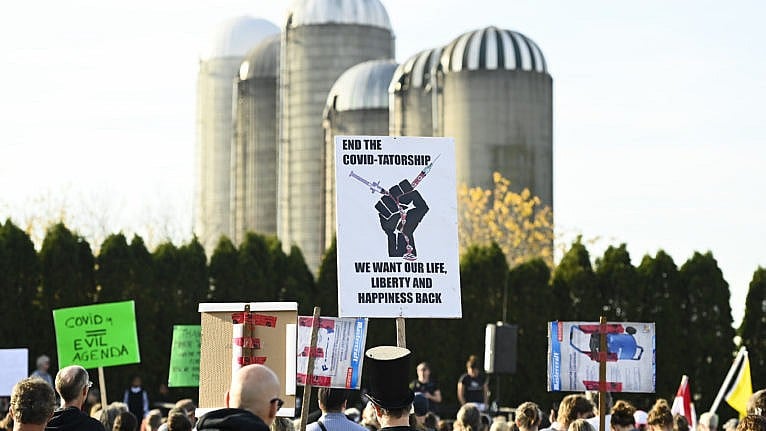 People gather at an anti-mask demonstration during the COVID-19 pandemic in Aylmer, Ont., on Nov. 7, 2020(Nathan Denette/CP)

Maxime Bernier, the leader of the People’s Party of Canada, and Randy Hillier, the independent MLA for Lanark—Frontenac—Kingston, were both ticketed at an ugly anti-lockdown rally in Peterborough, Ont., on April 24. Bernier slipped away before the worst part, when Hillier and his unmasked supporters crowded around police officers, cursing and insulting them at close range, a feature of the protests Hillier has been organizing around southern Ontario, part of an ongoing, spittle-flecked battle for freedom against what his supporters see as tyrannical health restrictions.

Bernier and Hillier are both members of the End the Lockdowns Caucus, along with independent MP Derek Sloan, 20 municipal politicians, mostly from Western Canada, and three former MPs. There are a lot of “formers” in the movement—including Bernier, Hillier and Sloan—all of whom are failed leadership candidates for mainstream parties. Bernier is a former MP, having failed to hold his Quebec seat after leaving the Conservative Party of Canada. Sloan, who was ejected from the Tories, will likely be a former MP whenever the election is held, and Hillier, who was ejected from the Ontario Progressive Conservatives, is likely to lose his seat in the legislature.

But for the last few months, these marginal figures have been drawing crowds of hundreds, rallying for the freedom to violate provincial health rules that have shut businesses and imposed restrictions on worship.

The steam is likely to go out of the movement within months as infections go down and restrictions are lifted, but that depends on reaching herd immunity, which depends on an unknown percentage of Canadians getting vaccinated—somewhere between 75 and 90 per cent, according to virologists. If enough people don’t get jabs, COVID will never go away.

And the crowds that Hillier and his friends draw are more likely to refuse vaccines, just as they refuse to wear masks or accept lockdowns. Their movement may make it harder to stamp out the virus.

A look at the map shows what’s going on, says Rupen Seoni, of Environics Analytics, who in March completed a study of attitudes towards vaccines across different social segments, using detailed demographic analyses of every bit of Canada. Environics has created 67 “geoprofiles” that describe the social values and lifestyle of every postal code in Canada, each with a clever name meant to give a sense of the place: Metro Melting Pot, Suburban Recliners, and Enclaves Multiethniques, for example. The in-depth analysis allows Environics to predict how people in a given area think and behave. “That can be for what kind of toothpaste people prefer to something like we’re seeing today in terms of their attitudes towards how the pandemic has been handled and how likely they are to be vaccinated.”

A short drive from Peterborough, there are a number of rural postal codes where vaccine resistance is higher: geoprofiles that Environics calls Kickback Country, Down to Earth and New Country. The same geoprofiles are also present around Spruce Grove, Alta., where hordes of maskless protesters tore down a fence police set up to stop unmasked, rule-violating worship at Grace Life church, whose pastor James Coates spent 35 days in jail after refusing to agree to abide by court orders. The same demographics are also present around Bowden, Alta., where a No More Lockdowns’ Rodeo was held on May 1.

In the most vaccine-positive geoprofiles fewer than four per cent say they won’t get jabbed, while New Country is 24 per cent. The national average is about 13 per cent.

The majority of people in rural, largely white areas want to get vaccinated and believe in wearing masks, but the number of people who don’t believe in the scientific consensus around COVID is higher there than in most places. “There’s a small minority of the population that is larger than average in those segments,” says Seoni. “It’s taken a fairly hard stance of saying, no, we’re not going to get vaccinated.”

Environics took data from a national survey of 10,000 collected in March and cross-referenced it with their geoprofiles and looked for correlations with vaccine resistance and social attitudes. The strongest correlation was with belief in conspiracy theories. The vaccine resistant are more likely to believe that the pandemic is a hoax, or a scam designed to make money for big pharma and hospitals, and the people who believe that are concentrated in rural areas.

Other areas have issues with hesitancy—often lower educated, lower income urbanites—people who don’t have enough information to know that the vaccines are safe, or are apathetic about their health. In other cases, like among some minority groups, hesitancy is rooted in a well-founded distrust of authority linked to historic abuses. But the resistant people are different in that they believe things that aren’t true, and they are hard to convince.

Pollster Frank Graves, of EKOS, who has been studying populism for years, believes disinformation, mostly from Facebook and YouTube, explains what is going on.
“Bill Gates and George Soros are basically infecting the 5G towers so that they can make money to run their Jewish space lasers,” he says. “It lights it up, particularly with low information voters and people, frankly, with lower mental ability.”

Graves is convinced that social shifts that have threatened the traditional position of white men is behind the phenomenon. “It’s a product of fear of losing your position of cultural hegemony. And they’re being aided and abetted by very sophisticated algorithms being concocted by AI and other sources, some of them tools of statecraft from other countries, some of them are coming within as tools of anarchy.”

Graves, who sits on a federal Vaccine Confidence Task Force, thinks it is a waste of time to try to convince the disinformed that vaccines are safe and valuable.
“They think that’s all fake news and they’ll give you their YouTube video, their Plandemic video or whatever it is that has sorted it all out for them, and you’re not going to move them.”

Pollster Nick Kouvalis, who has done political work for Rob and Doug Ford, as well as John Tory and Christy Clark, thinks there is no reason to try to convince the conspiracy theorists to get vaccinated.

Canadian Public Health officials haven’t even really tried to deal with the problem of disinformation, says Kelly Peters, of BEWorks, a behavioural economics company that worked with Environics to study vaccine resistance. “Isn’t the job of Public Health to not only just disseminate pamphlets of straight up information, but it should be to understand why people feel what they feel and to address those concerns?” she said. “There are strategies from behavioural science that dig in the barriers to just accepting that straight-up information.”

Public health officials in Israel worked with religious leaders to convince hard-to-reach religious communities to get vaccinated, confronting and combatting conspiracy theories. In Canada, where some evangelicals are mistrustful of governments out of step with their values on social issues like abortion and same-sex marriage, officials need to reach out and make sure those cultural issues aren’t a barrier to health measures, Peters said.

Bruce Clemenger, president of the Evangelical Fellowship of Canada, warns against making assumptions about vaccine resistance among evangelicals.
“When we go overseas and work in other countries, one of the key priorities is medicine … There’s a perception that evangelicals are anti-science, but that’s not lived on the ground. In most cases we’re talking about the outliers.”

The outliers are churches like Grace Life, which is not a member of the Clemenger’s organization. Many evangelicals have specific concerns about measures that limited worship but accept that governments must protect people, Clemenger said.

Nobody needs to convince him of the importance of taking measures against COVID. He spent 16 days in hospital in December with COVID, and is still coping with lingering health issues. He said at the heart of Christianity is the admonition to love thy neighbour as you love yourself. “One way we can love our neighbours is by following the restrictions of getting vaccinated. Because it’s not just you you’re putting in threat,” he said. “The disease is highly communicable and it puts a stress on a public health system.”

Clemenger says he would be happy to work with the Public Health Agency of Canada on these issues, to address vaccine hesitancy in evangelical communities, but he has not heard from them.

In an emailed statement, the Public Health Agency of Canada said it will “combat misinformation by leveraging trusted community information sources to build capacity for evidence-based vaccination communication, education, promotion, and outreach.”

It did not respond to questions about how it will tackle the vaccine-resistant who have been drawn in by conspiracy theories.