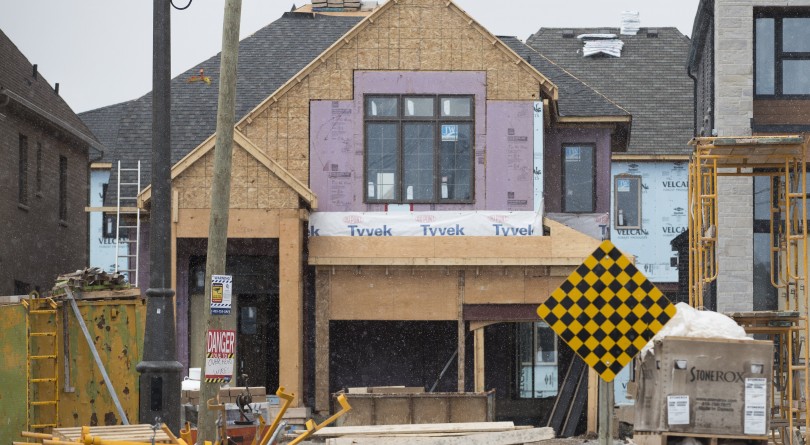 Some people who bought new builds in an Oakville, Ont., development are facing financial issues due to new mortgage criteria and the devaluation of the houses they bought a year ago. (Rick Madonik/Toronto Star via Getty Images)

Not everybody is going to have sympathy for the group of homebuyers in Oakville, Ont., who say they are facing financial ruin on new homes thanks to attempts by the Ontario government to cool the housing market.

These weren’t housing speculators trying to score quick bucks, according to the Toronto Star story published in early April. The cost of their new homes, which ranged between $1 million and $1.6 million, were entirely in line with average market prices. The buyers talk of scrimping and saving; of living with extended family to make ends meet.

Claudia and Darren Evans, for example, purchased their home for roughly $800,000 in 2013, according to Mattamy; in that time, the property’s value appeared to make extraordinary gains, prompting the couple to purchase a comparable home with a better floor plan for their young child—now valued at close to $1.6 million.

After agreeing to buy the new home, the Evans’ put their old home on the market, but received only low ball offers.

“We haven’t put our house on the market again and we need to close in seven weeks. There is no point. We are watching the market so closely with our realtor and we can’t afford to take the amount of money that we will get offered right now. If we got a delay in closing then it would be fine. I’m sure the market will recover in time,” Darren Evans told the Star.

In order to make up the gap between the price they agreed to for the new home at the sale date in 2017 and the appraised value of the home on the close date, the couple will need to rely on a third-party lender offering very high rates. (Reached by Maclean’s, Claudia Evans declined to participate in the story.)

Many of these families, who have itemized their grievances with their homebuilder, Mattamy, at communityforfairness.ca, knew that a correction was likely—but nothing like this. The Ontario Liberal government said it would not be following B.C.’s lead by announcing cooling measures, like a foreign buyer’s tax.

Yet that’s exactly what Kathleen Wynne’s government did. And compounded with tighter new rules for mortgage lending, families in this community said they are struggling to find financing on homes that are no longer worth what they were at the peak of the market last year.

It would be easy for those of us left throwing popcorn from the sidelines of the country’s hottest and most lucrative property markets to condemn these families to watch endless re-runs of Gail Vaz Oxlade. But consider, for a moment, that they may have some fair complaints. That an entire real estate industry—from banks and their financial advisors to builders—exist to lure promising young couples into ever-deeper mounds of cheap housing debt.

The last major housing crash in Canada is usually pegged in the late ’80s and into the early ’90s. There is a whole generational belch of eager young homebuyers who have no living memory of a major housing correction. Who have nothing but their parent’s old-time memories of double-digit interest rates, market peaks and jingle mail.

Buyers of this generation have been told that it’s impossible to lose money on real estate; that this is the safest investment on the books.

So ingrained is this idea that generating real estate wealth has become an industry in and of itself, with entire cable channels devoted to flipping and equity building, and get-rich-quick experts offering classes, workshops and conferences; A recent Real Estate, Bitcoin & Wealth Expo in Toronto included bizarre and rambling inspirational speeches by Sylvester Stallone and Pitbull.

No doubt much of this speculation has worked. It’s not that hard to make money on property when real estate prices are increasing 10 per cent year over year. The problem is that eventually these gains can’t sustain themselves and the market corrects, crashes or simply plateaus.

And that seems to be where much of the country sits today. Government measures seem to have stopped the mental price increases that had become a common complaint (or blessing), but not much else. The average home is still not affordable for the average family in most major cities. And those who bought in at the peak are unlikely to recoup their losses.

Another interesting case in the Toronto Star: a couple that got caught up in a bidding war on a Stouffville home in April 2017 agreed to pay $2.25 million. The market dropped. The couple reneged and the buyer eventually sold the property for $1.7 million. The couple, however, was recently ordered to pay the $470,000 difference.

According to a survey released last week by Leger for Re/Max, the great housing stall doesn’t appear to be going anywhere; thanks to new mortgage stress testing rules, one-third of potential homebuyers had decided against buying a home. Significant numbers also said they compromised on the size of their home or its location.

Brad Carr, Canadian president of Mattamy Homes, said that housing is still a good long-term investment in the GTA—but agrees that prices are down and the days of massive housing profits were “unsustainable” and probably over.

“I always say that I fully empathize with those who find themselves caught in this situation. However, I always ask them to step back and ask themselves: ‘Has Mattamy done anything about this situation that is different from what we committed to doing?’ What’s changed is the market,” he said.

When Mattamy took these families’ deposits, it did so because it expected that family had the wherewithal to hold to its commitment, regardless of whether the value of that home went down between the sale and the close date.

Of course, beyond asking for a pre-approval and the deposit, the homebuilder doesn’t do much to double-check the state of a buyer’s finances. If he or she can afford to drop a few hundred thousand dollars, “We deem you to be a sophisticated buyer,” Carr said.

“When prices are going up dramatically, I very seldom—in fact, I have never seen—someone who has said ‘we are making substantial money by closing. I would like to give you more money,'” he said. “When the market is going in the other direction, we also don’t expect to be responsible for those potential price downturns.”

And, Carr concedes, Mattamy hasn’t ruled out suing buyers who renege on their contracts before their houses close.

This should not be news to anyone who reads the contract they sign; but those who have never been burned by real estate have never had reason to be too careful.

Mattamy, and homebuilders like it, assume that the sort of people dropping $1.6 million on a home are “sophisticated buyers.” An alarming consideration: What if they aren’t?