Evan Solomon: The police completed their report into his death. Their answer, emailed to the family: no one will be charged. 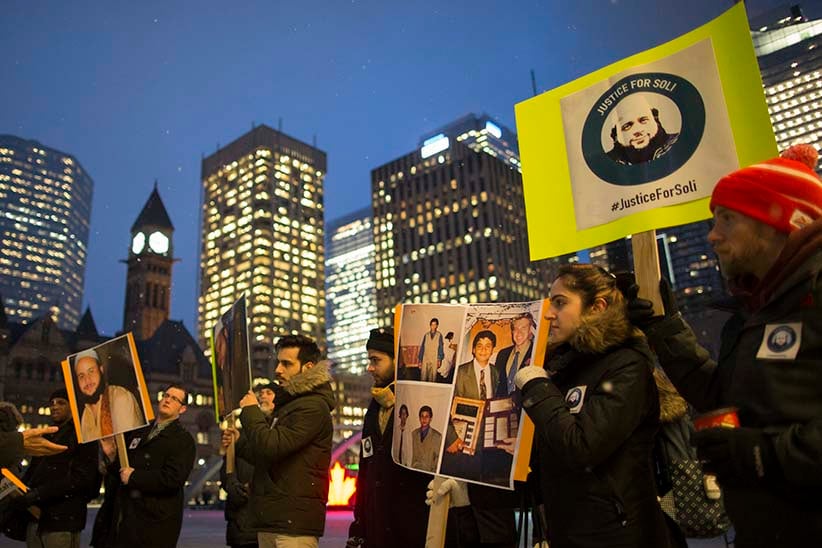 A small group of family and friends of Soleiman Faqiri hold a vigil at Nathan Phillips Square for the mentally ill man who died during an altercation with guards in jail in Lindsay. (Rick Madonik/Toronto Star/Getty Images)

“The nightmare continues,” Yusuf Faqiri says after reading the shocking response from the Kawartha Lakes Police Service regarding the brutal death his brother, Soleiman Faqiri. “We have waited almost an entire year to hear this horrible news.”

Back on Dec. 4, 2016, Solieman was incarcerated in the Central East Correctional Centre in Lindsay, Ont. The prison was aware he had a mental illness, but officials put him in solitary confinement. Eleven days later, after an altercation with the prison guards, Solieman was dead.

Since then his family has agonized, waiting for answers to fundamental questions: Who was involved in the incident? Were any guards suspended? Will anyone be charged? On Monday, they finally got their answer: silence.

“The City of Kawartha Lakes Police Service has completed the investigation into the death of Solieman Faqiri,” wrote Inspector Will Herbert in an email to the family. An email. “We have concluded that no grounds exist to process criminal charges against anyone who was involved with Mr. Faqiri prior to his death on December 15th, 2016.”

That’s it. That’s their answer to how Soleiman Faqiri died. No accountability. No explanation. No grounds for more questions.

Pause there and try to appreciate how stunning this news has been for the family. No grounds exist for criminal charges despite the fact that the extensive coroner’s report back in July detailed the beating Soleiman Faqiri took at the hands of the guards after he refused to get out of the shower on Dec. 15. Soleiman’s body had a deep laceration across his forehead and 50 different bruises and injuries all over his face, head, neck and upper and lower body.

No grounds exist despite the report describing in details the prison video—yes, there is video—of “an episode when one of the correctional officers seemed to strike out at the inmate.”

READ MORE: What the death of a mentally ill inmate tells us about Canadian justice

No grounds exist for charges despite the video showing that Soleiman’s “ankles and wrists were cuffed…A spit hood was placed over his head…Pepper spray was deployed” and he was “smacked.”

No grounds exist for charges even though Soleiman was pushed into his cell, where there is no video evidence, and between 10 and 20 guards poured in after him. Minutes later he died.

Soleiman Faqiri was essentially hog-tied with a hood and beaten, and there are no grounds to charge a single guard with anything?

“I’m disgusted by this,” Nader Hasan, the Faqiri family lawyer, says. “Read that autopsy report and it is obvious there are reasonable and probable grounds to show there should be multiple criminal charges. This is an insult to the family who have waited so long for answers. We must conclude we are being stonewalled.”

Hasan immediately called Inspector Herbert and demanded answers. “‘You gotta get us more than this,’ I told him. Soleiman was assaulted by 10 to 20 guards and body was covered with bruises; how do they conclude no grounds for charges? How does almost 11 months get to this conclusion? But Inspector Herbert told me if we want more answers. we have to make an application under Freedom of Information Act.”

A mandatory inquest is conducted by the corner anytime there is a death inside a correctional facility. In this case, it was delayed because there was the potential for criminal charges to be laid, but now Hasan is demanding it start immediately. “We want to get this moving,” he says. The inquest will at least allow Hasan to call evidence and cross-examine guards and witnesses, but it cannot draw conclusions about criminal responsibility. It can, however, determine if Soli’s death was a homicide which, Hasan hopes, would lead to the police reopening the case and laying criminal charges. But it will take months, maybe years to finish.

Meanwhile Hasan has also demanded that the Ontario Provincial Police conduct a parallel investigation. “There are clearly questions of impartiality here,” Hasan says. “A local police force investigating a local jail—who they work with closely—does raise questions. We would like to see an outside police force conduct an investigation, which arguably they should have done from the beginning.”

None of this guarantees the police will reopen the case and lay charges. That will only come from public pressure, from people demanding to know how a man can die in a Canadian prison and not a single employee is held accountable. All this means more agony for the Faqiri family, more waiting, more silence.

“The lack of transparency by the Kawartha Lakes Police Service is utterly unacceptable and unconscionable,” Yusuf told me. It’s a testament to his strength that his family’s sadness, frustration and anger have not given over to total despair.

I’ve written about this troubling story twice already in this magazine, and back in July I said that Solieman Faqiri had fallen down a black hole in the justice system. Now it’s become Kafkaesque. “We’ve got no explanation on their decision,” a bewildered Yusuf says. “We still don’t have any answers. This is not fair to my family and ultimately to my beautiful brother Solieman who lost his life.”