A big stack of wartime letters was headed for the dumpster at a Salvation Army north of Toronto. But now the touching correspondence has reached its rightful homes. 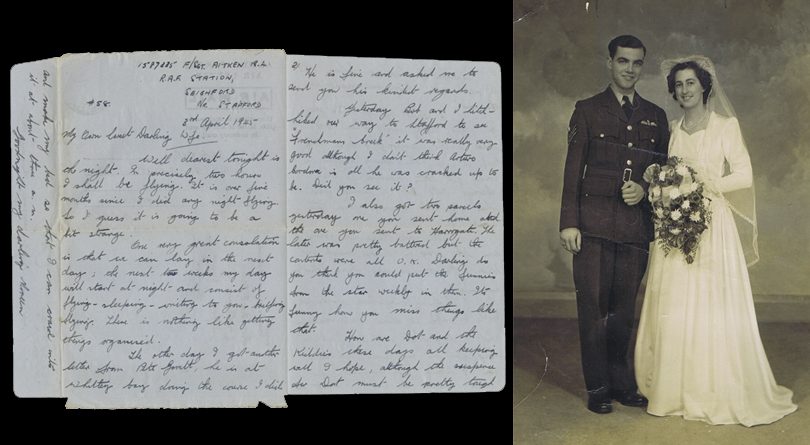 In the long-lost letters, Aitken read about the passionate courtship of his parents Bernard and Noreen (right). (Pier 21/Aitken Family)

Covering every square inch of the tissue-thin paper, tucked safely into airmail envelopes, was a cursive style Jim Dobie hadn’t seen in many years. It was the ﬁrst thing he noticed, and conﬁrmed what he’d been told: the 18 pieces of paper ﬁlled with looping, interconnected characters did indeed come from his father. “It was incredible,” says Dobie. “His handwriting never changed.”

Dobie, a 60-year-old Bell Canada employee from Port Hope, Ont., is one of three Ontarians contacted earlier this year by the Canadian Museum of Immigration at Pier 21 in Halifax after one of the museum’s guides, George Zwaagstra, received a collection of about 300 letters dated between 1944 and 1945. The letters were written by four people—soldiers posted overseas during the Second World War and members of their families back home. They’d all been sent to or from the Toronto area.

In addition to the letters Douglas Dobie, a gunner with the Royal Canadian Artillery, wrote to his mother Edith were more than 200 between Bernard Aitken, a newly married British pilot and flying instructor, and his Canadian wife Noreen, who was living in downtown Toronto; plus 30 written by Charlotte Grant of Paisley, Ont., to her son Ivan, a private in the Canadian army.

While much of the content focuses on the writers’ everyday lives—how they passed the time, how relatives were doing, whether the soldiers had received packages—the underlying context gives some sense of their inner lives at a crisis point in history.

Aitken’s son Jim, a 71-year-old retiree, was so surprised by the discovery that he initially wondered if it was a hoax. Then, after seeing they were genuine, he wasn’t sure he should read them. “In some ways, it was prying into my parents’ personal affairs,” he says from his home in Neebing, Ont., near Thunder Bay. “At the same time, I was intrigued to see what their courtship romance was like. I always thought of my father as a stiff-upper-lip Brit. I’m seeing another side of him.”

In one letter, Bernard tells Noreen what he’s been up to—notably, night flying, something he hadn’t done for ﬁve months. While he seems excited about being able to fly, it appears he misses home more, writing, “What a day that will be!” when he’d be able to hold her in his arms again and kiss her. He calls her “my own sweet darling wife” and signs it “your loving husband forever and ever, Bernard,” with several x’s and o’s.

Aitken says his father was originally stationed in Canada as a flying instructor after earning his wings with the Royal Air Force. He spent most of the war here, and met his wife here. At some point, Aitken says, he must have gone back to Europe, as that’s where the letters were posted.

How all the letters wound up together is a mystery. Before they reached Zwaagstra, Geeta Bala, a Salvation Army worker in Newmarket, Ont., retrieved them from a mass of donated items marked for the garbage during the summer of 2017. Unsure what she’d found (her understanding of English is limited), she brought them home to her son Vijayant, who quickly discerned their importance and set out to ﬁnd relatives of the writers.

That summer, Vijayant travelled on the tall ship Wylde Swan as head of a sailing and life skills camp for teenagers; when it made a stop in Halifax, he toured Pier 21 and ﬁgured Zwaagstra and the museum might use their contacts and research experience to help. Cara MacDonald, reference services manager at Pier 21, handled most of the process. Using cemetery websites, obituaries, ancestry services, calls to funeral home staff and social-media pages, she eventually tracked down Jim Dobie and Jim Aitken, as well as Ivan Grant’s niece, Janice Gerol.

Aitken says that after the war, his mother moved to England to be with her husband before they returned to Canada in the 1950s and settled in Scarborough, Ont. That doesn’t explain how his family’s letters wound up at the Salvation Army—only that they crossed the Atlantic one last time. 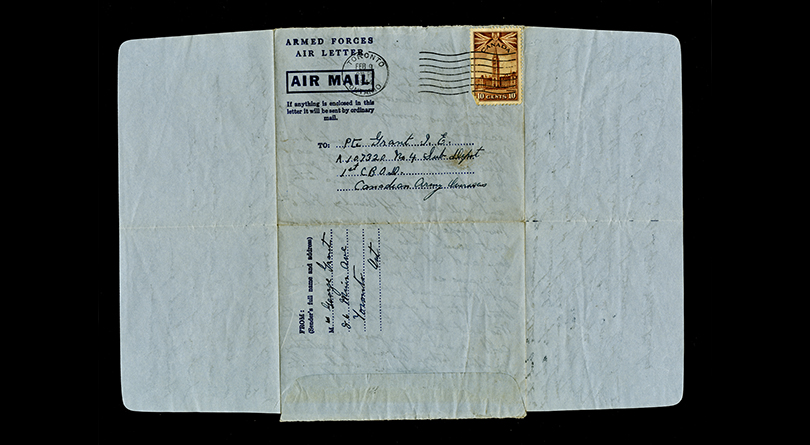 Gerol, now a vice-president with the kitchen-supply company Pampered Chef, says she got goosebumps reading the words her grandmother penned to Grant. Charlotte seemed worried her son didn’t get the box of 25 cigars she had sent. There was debate over Ivan’s brother’s nickname (Eddy or Teddy?). Gerol was young when Charlotte died, and only learned about her through others’ stories. “It was like going back in time and sitting with her as she wrote,” she says.

Jim Dobie’s father, like many soldiers of the era, never talked about the war. So the letters ﬁlled in blanks about his movements and preoccupations at the time—he writes about where he took leave, asks for socks, jokes darkly about the English weather (“good—for ducks”). He turns briefly personal about his broken engagement with a girlfriend back in Canada—not the woman he ultimately married—saying curtly, “As far as I’m concerned [the relationship] is staying off.” And he reassures Edith that his boss at Simpsons department store has written to conﬁrm he’ll have a job when he returns.

And return he did, as did Bernard and Ivan, leaving the question of how their mail ended up together in a charity bin unanswered. For the man who brought the letters to light, it’s one that can wait. “At the end of the day, at least the loop’s been closed,” says Vijayant. “They’re back to people they should be with.”