These protesters know more about Indigenous issues than their detractors claim

At an overnight street demonstration in support of Wet'suwet'en hereditary chiefs, Rachel Jansen finds the 'ignorance' knock doesn't stand up to fact 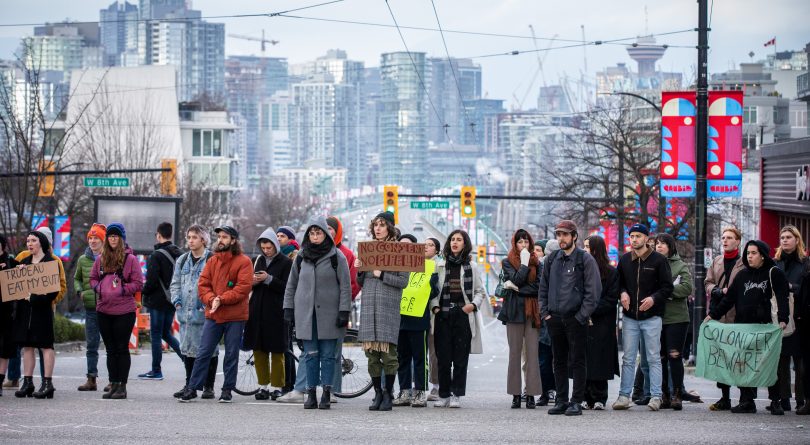 It doesn’t feel like an old-school, hard-core protest. At the centre of the intersection of Cambie Street and West Broadway a hundred or so people have gathered on a starless Vancouver night. There’s a crackling fire and the sound of drums reverberating through the quartered-off roads. A large marquee has been erected, covering a heaping pile of blankets, Tim Hortons coffee packs, boxes of pizza. People chat and share food, sitting on pieces of cardboard or collapsible chairs brought from home, their bodies moving to the beat.

If it weren’t for the location—one of the busiest crossroads on the city’s west side—and the lights from police cars flashing from every direction, the crowd on this day, Feb. 11, could easily be mistaken for a folk festival audience. But attendees have come to protest the proposed Coastal GasLink pipeline route through unceded Wet’suwet’en territory—the fifth such demonstration in the city in a week.

The action is led by 19-year-old Saskia Burdick, a student at the Native Education College in East Vancouver. A member of the Heiltsuk Nation on B.C.’s central coast, Burdick says the decision to set up at this particular intersection was impromptu. Her group originally planned to occupy the offices of George Heyman, B.C.’s minister of climate strategy. “I expected about four people to come, but the word got out,” she marvels. “There was maybe about 40 when I showed up, and we had enough people to take an intersection. So we marched from George Heyman’s office to here.” Burdick, at this point, has already been on site for over 10 hours and, like many others, is planning to stay the night.

It’s been easy given the festive atmosphere at demonstrations like this to dismiss the participants as ill-informed dilettantes with scant knowledge of the issues at stake. More than a few have. Andrew Scheer tapped into that suspicion last week with remarks depicting supporters of the Wet’suwet’en hereditary chiefs as hobbyists with too much time on their hands. “These protesters, these activists, may have the luxury of spending days at a time at a blockade,” the Conservative leader said, “but they need to check their privilege.” Similar complaints buzzed through social media, some portraying the protesters as environmental activists exploiting a chance at publicity.

But conversations with those at the centre of the Vancouver events suggests a greater depth of knowledge of the dispute than critics suggest. “In the media coverage thus far, the major outlets have been calling what’s going on a ‘pipeline protest,’” says 25-year-old Kellan Jackson, one of the protesters. “While the action is specifically asking that the Coastal GasLink project not go through, the reason for that is because we are acting in accordance with the Wet’suwet’en hereditary chiefs.

“It’s a movement for Indigenous sovereignty and for respect of Indigenous title. So we’re acting as allies and accomplices in land protection, we’re not protesting a pipeline.”

Demonstrator Krystal Paraboo, 30, resents the inference that “we’re just little young, millennial, hippy activist groups—emphasis on the millennial part.” The implication, she adds, is that “we have nothing better to than complain about the world. We’re not bad people for caring about human rights.”

The priorities of Paraboo and Jackson turn out to be fairly typical of the surrounding activists. While many acknowledge that environmental factors played a part in getting them out on the street, the primary reason for their support, they say, is solidarity with the hereditary chiefs asserting jurisdiction over Wet’suwet’en territory, versus the elected band councils who back the project but derive their authority from the long-criticized Indian Act.

Some point to the seminal Delgamuukw Supreme Court of Canada decision of 1997, in which the hereditary chiefs petitioned for Aboriginal title to territory outside their reserves, with partial success. (Their grounds for title based on oral histories were recognized, though the limits of their traditional territory have yet to be defined.) This distinction goes to the heart of the most contentious part of the issue: while eight out of nine hereditary Wet’suwet’en chiefs refused to sign off on the pipeline (one remained neutral), 20 elected First Nations councils along the route did. That was the presumptive green light for the project, since theirs is the system of Indigenous governance recognized under B.C. law.

RELATED: The Wet’suwet’en are more united than pipeline backers want you to think

But for some activists, the belief that Coastal GasLink and the government are overriding the inherent Indigenous rights to unceded territory demands public attention—even if getting it requires disrupting daily life. “I feel like today I was hearing a lot of: ‘Well sure, OK you don’t agree with what’s happening but this isn’t the right way to protest, you shouldn’t be shutting down the economy.’ But people are using that rhetoric [of economic interference] on purpose because that’s what makes the government listen,” says social worker, Linden Lalonde, 33. “I think that supporting Indigenous efforts for sovereignty and governance are ways forward.”

And the growing awareness of such distinctions is a victory of sorts for Indigenous activists, who are increasingly critical of the First Nations governance system recognized by Ottawa and the provinces.

Sara Brooke Cadeau, 48, an Anishinaabe trauma therapy worker, describes the elected councils as “INAC boys,” referring to the Indian and Northern Affairs Canada (formerly the Department of Indian Affairs, the ministry created to administer and enforce the Indian Act, colonial legislation passed by the Canadian government in 1879 that included assimilationist policies intended to terminate cultural, social, and political distinctiveness of Indigenous peoples).

“Why are we still wondering why INAC chiefs sign off the rights of their own people’s land for seven generations? INAC is set up to divide, conquer and control the people,” says Cadeau, who is quick to caution against painting all council members with the same broad strokes: “I have friends and family that work as chief and council and do a really good job. They’re hard working, and they have the hearts of their people.”

But, she adds, “when we look at it from a bureaucratic and holistic point of view, this is not a natural system; this is not a system of checks-and-balances.”

An 81-year-old former teacher from the Heiltsuk Nation, who asks that her name not be used, adds historical perspective. “I think the government knows exactly what they’re doing,” she says. “By talking to each village instead of having us get together to talk about this and be a unified voice. That’s been their motive for a long time.”

Just after midnight, a speaker with a megaphone beckons everyone to circle around. She asks that all attendees move to the perimeters of the blockade, in order to better hold the intersection, and requests that participants refrain from escalation and care for one another. Another speaker calls out for volunteers to look after the elders. Sharpies pass from person to person and people scrawl the number of a lawyer on their wrist—protection in the event that an injunction is issued and they’re arrested.

The remaining crowd is a mix of young and old, Indigenous and non-Indigenous. Slowly, supporters move to the crosswalks, unscroll their makeshift sleeping mats, and zip up their coats, settling in for the night. “We’re all in the same canoe now. And that canoe is going to f–king capsize,” says Cadeau. “So get in the canoe, get your paddles and come on to the next blockade. Talk to us, and understand that we’re not here for your jobs, we’re not here to get retribution. We’re here for justice.”