They came to celebrate Jo. He would have loved it.

Joël Aubin was diagnosed with Alzheimer's at 37. Last month, the 42-year-old exited the world peacefully, as close as he could to how he wanted. 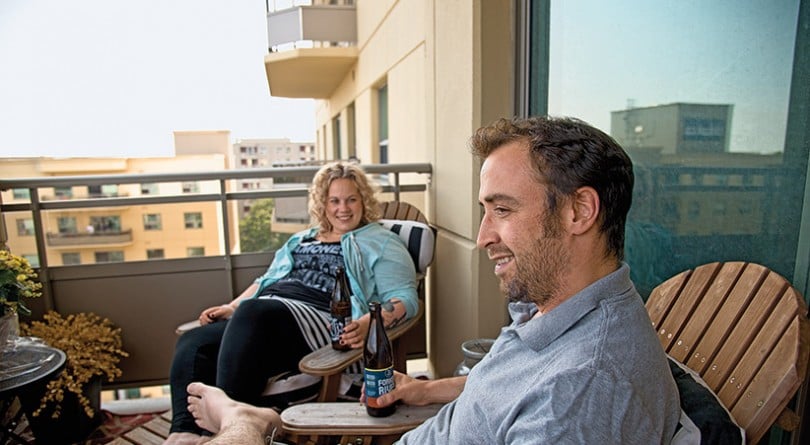 Joël Aubin and Robin Giles enjoy a beer on the balcony of their London, Ont., home on July 11, 2015. (Photograph by Dillan Cools)

In September 2015 Maclean’s told the story of Joël Aubin (Jo has Alzheimer’s. He’s 38). Three years later, we followed the story of Jo and his wife, Robin Giles (This is what Alzheimer’s is like at 41). After his condition took an unexpected turn, Jo died on Nov. 29 at the age of 42.

Joël Aubin managed, in the end, to get about as close as he possibly could to what he wanted.

In mid-November, it was like a switch flipped: one day, things were as they had been for the last several months, with early-onset Alzheimer’s disease continuing its assault, and the next, everything changed. It’s unclear exactly what happened, but some kind of brain event left Jo, 42, suddenly immobile, bedridden and unable to swallow.

Over the past year, his needs had escalated to the point where his wife, Robin Giles, forced herself to put him on the waiting list for a long-term care facility near their home in London, Ont. The decision tormented her, because Jo abhorred the idea of going into a nursing home like the one where his mother’s life had ended from the same inherited form of the disease when he was just a teenager. What Jo wanted was to be able to end things on his own terms, but Canada’s assisted dying law does not permit people with dementia to make advance requests when they still have capacity to consent, to be acted on later.

So at the end of this summer, when a bed came up for Jo in a nursing home, Robin couldn’t bring herself to do it. After she turned down the spot, she had the most peaceful night of sleep she’d had in a long time, but it seemed an impossible choice would still be forced on them eventually.

Instead, there was Jo’s sudden turn in mid-November. It would seem afterward to Robin and to Jo’s oldest friend, Shawn Veilleux, that Jo simply determined for himself how things were going to go.

Robin followed Jo’s wishes and decided against intravenous nutrition or any other measures that would prolong things. One of their friends procured a top-of-the-line hospital bed for their apartment, and others took rotating days off work so they could be there around the clock to help. Jo’s doctor made daily house calls, fine-tuning his medication to control his frequent seizures and keep him comfortable. Shawn and his family arrived from Ottawa, and Shawn more or less moved into the apartment.

For the last days of his life, there was a pack of people around Jo at all times. They listened to music, they talked, they made highly inappropriate jokes. They were loud. It was beautiful and exactly right for Jo. “I loved it, even though I hated it,” one of them said later. To another, it seemed like Jo gathered them all together and kept them like that long enough to make sure they would be okay.

Early one morning, a week and a half after Jo stopped eating, he peacefully exited the world with the people who loved him most by his side. He had not spent a single day in a hospital or long-term care facility.

Two days after he died, those same people gathered with dozens upon dozens of others to celebrate Jo. They did it exactly as he wanted. They packed the back room of a brewery Jo loved, which was owned by some friends. There were massive quantities of pizza and chicken wings and chips and egg rolls, and all the taps at the bar flowed freely.

There was music everywhere. Everyone showed up in the requested dress code of jeans and band t-shirts, and Jo’s closest male friends wore shirts from his closet. Two teachers who work at the school where Robin works—where Jo used to teach—played guitar and piano and sang a roster of his favourites. There were small boxes scattered around the room next to photos of Jo cradling his guitar, where people could donate to a scholarship fund that would be set up in his name.

The room felt very full. It was packed with bodies and voices, of course, but it also felt like it was overflowing with everything Jo and Robin have gone through in the last several years, with the emotion and effort it took for them to navigate it, with the love of those who have helped to carry them along, with a tiny exhale of relief and a gasp of deep sadness, with the grasping for what happens now.

They told stories and laughed uproariously. People were fine and then suddenly they weren’t, undone by a fierce hug or a new face walking through the door.

At one point, everyone raised a glass and toasted Jo with a French-Canadian swear word, because until the very end of his life—in a way that defied explanation given the progress of the disease—Jo remained so present and witty and in command of perfect comedic timing and just the right one-liner for the moment.

On one wall, a photo slide show meandered through the decades. There were Jo and Shawn posing behind a theme park cut-out as Tweedledee and Tweedledum; Uncle Jo playing guitar as Shawn’s son, Luke—now eight years old, then just a baby—gazed raptly up at him; friends piled on couches at parties and on student rental front porches; Robin and Jo leaping through the air in their Chuck Taylors on their wedding day. There were dozens of photos with Jo and Robin draped around each other’s shoulders: baby-faced high schoolers, radiant in formal wear at their friends’ weddings, in their pyjamas on Christmas morning.

It seemed like every second photo featured the same Jo expression: mouth cranked into an open grin, eyebrows leaping off the top of his face, ready to eat the world in a single joyful gulp.

Toward the end of the evening, someone picked up a guitar and stepped to the microphone to sing one of Jo’s favourites, Pearl Jam’s “I Am Mine.”

The North is to South what the clock is to time
There’s East and there’s West and there’s everywhere life
I know I was born and I know that I’ll die
The in between is mine
I am mine.

And the feeling, it gets left behind
All the innocence lost at one time
Significant, behind the eyes
There’s no need to hide
We’re safe tonight.

The ocean is full ’cause everyone’s crying
The full moon is looking for friends at high tide
The sorrow grows bigger when the sorrow’s denied
I only know my mind
I am mine.

They threw such a good party. Jo would have loved it.