A new agreement with B.C. and Ottawa is shifting focus from the gas pipeline to how the First Nation should be governed in the future

By Marie-Danielle Smith and Nadine Yousif May 14, 2020 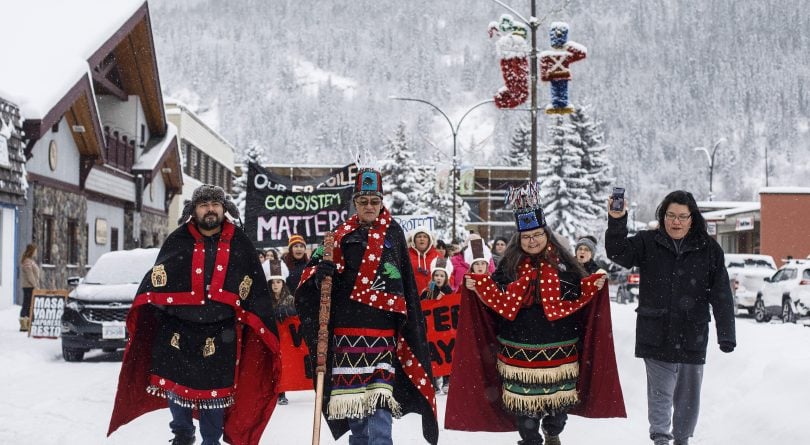 With a virtual signing ceremony on Thursday, federal and provincial governments are set to formally recognize Indigenous title over traditional land for the first time outside a courtroom.

A signed memorandum of understanding with Wet’suwet’en hereditary chiefs will launch a year-long negotiation to decide the terms of their claim to a vast territory in northern British Columbia. It is a momentous step but still an early one in an arduous trudge to a long-fought resolution. (Read the MOU here.)

READ MORE: For the Wet’suwet’en nation, formal land rights may be on the horizon

Critics worry about unexpected consequences, and even signatories acknowledge that the hardest work lies ahead. But before that work even begins, conflict within the community itself is shaping up to be a serious roadblock.

“I don’t believe in signing anything and negotiating later,” says Dan George, one of four band chiefs who claim their elected councils were excluded from the process that led to the MOU. “It’s like buying a vehicle, signing on the dotted line, then negotiating the price after. That does not make any sense to me at all.” (Although the elected chiefs did not participate in negotiations with the B.C. and Canadian governments, they did have access to the document in their capacities as members of houses led by hereditary chiefs.)

The nation of about 4,000 people is spread out over a vast territory west of Prince George, through which the Coastal GasLink natural gas pipeline is currently being built. As intensifying backlash over the pipeline prompted protests, arrests and international headlines early this year, rifts in the community were laid bare.

Though many vocally backed a contingent of hereditary leaders that sought to oppose the pipeline at any cost, others were keen to reap economic benefits the project promised. Elected chiefs overseeing the administration of five of the six First Nations reserves within Wet’suwet’en territory signed agreements with Coastal GasLink. Hereditary leaders representing eight of the nation’s 13 house groups, whose traditional jurisdiction is far vaster, secured community approval for blockades that would hamper its construction. (One hereditary chief supports the pipeline; four seats are vacant.)

As the nation looks to govern itself under a formal agreement with Canada and British Columbia, that original disagreement over the pipeline still pits the two groups against each other. Yet the MOU makes no mention of the pipeline at all. What it does mention is that ownership of the land will not be transferred until “specifics” on internal government are clarified.

B.C. Indigenous Relations and Reconciliation Minister Scott Fraser said in an email that the nation’s internal governance “reunification” will be discussed within the process outlined in the MOU. “That will be the key to this work moving forward successfully.”

Hereditary chiefs have always said they are acting in the best interests of all Wet’suwet’en people and trying to consult broadly in the community. Maclean’s made attempts to reach the chiefs on Wednesday, but they deferred, saying they would speak publicly once the MOU is signed.

Still, there is pushback. In an open letter Monday, George and three other elected chiefs called the MOU’s conception secretive, unacceptable and disrespectful. For her part in their exclusion, they called on federal Crown-Indigenous Relations Minister Carolyn Bennett to resign and for the entire process to start anew.

George says elected chiefs did not until recently see a formal copy of the MOU outside of the small, internal clan meetings that took place in March. Nor did they discuss it in full with hereditary leaders until a week ago—two months after its negotiation, George says. In their own statement this week, hereditary leaders acknowledged having emailed the document last week in the interest of “openness.”

Elected chiefs are concerned about whether they will have input on how Wet’suwet’en lands and people are governed in the future, even though they currently only have jurisdiction on reserves that are tied to federal systems. The MOU recognizes only the nation’s houses, which are led by hereditary chiefs, as forming a future governing body; and it stipulates little about their system of governance except that it must be “clarified” enough for the Crown to understand it. “It’s all up in the air right now, and that’s kind of scary,” says George. “As elected leadership, we need to know where we stand.”

Ellis Ross is an Indigenous Liberal MLA for Skeena, a provincial riding just east of the territory that includes the port of Kitimat, where an export terminal for Coastal GasLink is planned. He says as much as he supports title recognition for the Wet’suwet’en Nation, it’s absurd for provincial and federal governments to have ignored democratically-elected leaders.

RELATED: These protesters know more about Indigenous issues than their detractors claim

“Think about it. This is happening in Canada. The B.C. provincial government and the federal government are condoning and encouraging a monarchy within the borders of Canada,” he says. “And this is without the Wet’suwet’en peoples’ consent.”

Ross worries that, especially with internal battles raging, a one-year timeline will be too speedy to adequately consider how title implementation could affect resource development, highways, private land ownership and more. “They should take a couple of years, at least. I question the motives,” he says.

Some British Columbians who live on the traditional territory but are not members of the Wet’suwet’en Nation are concerned about what the agreement will mean for them. Gladys Atrill, the deputy mayor of Smithers, has lived in the community for 50 years. She says some residents are worried about losing their properties, although Wet’suwet’en chiefs have assured them lands privately owned by citizens or the town will not be affected.

“It’s been a long time coming, and I think we’re all going to have to make an effort at making sure that all the concerns are at the table, and that this process works to the benefit of everybody,” says Atrill.

“One would hope that citizens will have some way to comment on what is being discussed, because we as citizens, Wet’suwet’en and not Wet’suwet’en, will all live here,” Atrill adds. “We’re hearing that from the Wet’suwet’en as well. People want information. They want a way to give input to the process.”

Bennett’s office clarified in a statement to Maclean’s on Wednesday that any agreement would need to be approved by the nation’s entire population: “Any agreement, once reached, would be taken back to all Wet’suwet’en people through a process that must clearly demonstrate the consent of the members of the nation.”

The minister wouldn’t comment on the demands for her resignation when asked about it during a House of Commons meeting on Tuesday. But she asserted whatever happens next will be “Wet’suwet’en-led.”

Hereditary chiefs insisted, in a statement on Monday, that all their decisions are made by consensus: “we listen, ask questions and discuss all matters as we have done for generations.”

Some members of the community who spoke to Maclean’s earlier this spring professed allegiance to the hereditary governance system, discounting the authority of elected band chiefs and describing lengthy deliberations over the MOU by large groups that included pro-pipeline representation.

But George says many were left out of the process. Some of them physically can’t make it to the feast hall venues where  meetings were held, he says, adding that hereditary chiefs haven’t given him a clear answer on how to make sure that all in the spread-out community are heard.

“All of my community members here are Wet’suwet’en. That title belongs to them. It does not belong to one hereditary chief. It belongs to the community,” he says. “This is a Wet’suwet’en matter, and all people need to be on this vote. This cannot move ahead until then.”

Memorandum of Understanding between Canada, British Columbia and Wet’suwet’en

We are pleased that we have agreed on the terms of a Memorandum of Understanding to guide the Wet‘suwet’en Nation, British Columbia and Canada in the recognition and implementation of Wet’suwet’en Rights and Title.

Attached to this letter is a true copy of the final version of the Memorandum of Understanding, which we and Wet’suwet’en hereditary chiefs initialed yesterday.

We confirm that we are prepared to sign this Memorandum of Understanding, as attached, as soon as you have completed your review processes and indicate to us that it has been approved by the Wet’suwet’en Nation. We understand you anticipate this will be completed in the next two weeks and that you will advise us of your response by March 13, 2020.

Memorandum of Understanding
between
Canada, British Columbia and Wet’suwet’en

c) The areas of jurisdiction that will need to be addressed include the following (without limitation):

d) Title will be implemented and jurisdiction (exclusive or shared) will be transferred once specifics on how aboriginal and crown titles interface have been addressed—this includes the following:

i) Transparency, accountability, and administrative fairness mechanisms including clear process and remedies to address grievances of any person, pertaining to all areas of shared and exclusive jurisdiction
ii) Clarity on the Wet’suwet’en governance structures, systems, and laws, that will be ratified by the Wet’suwet’en and will be used to implement their title to the extent required to understand the interface between the Crown and Wet‘suwet’en jurisdiction.

e) This agreement is to be ratified by Canada, BC and Wet’suwet’en under their respective systems of governance
f) The agreement will be binding on Canada, BC, and the Wet’suwet’en and all of their agencies, departments and officials as they conduct their business together as governments

Agreement to be Negotiated Over the Next Twelve Months
a) The specifics of how aboriginal and crown titles interface
b) The agreement recognizing Wefsuwet’en rights and title will be protected by Section 35 of the Constitution, 1982

Agreed to as of the 29th day of February, 2020
SIGNED ON BEHALF OF THE WET’SUWET’EN NATION by the
Wet’suwet‘en Hereditary Chiefs