This is Canada's real refugee problem

It’s not Canada’s willingness to take in large numbers of them. It's our woeful lack of preparation. 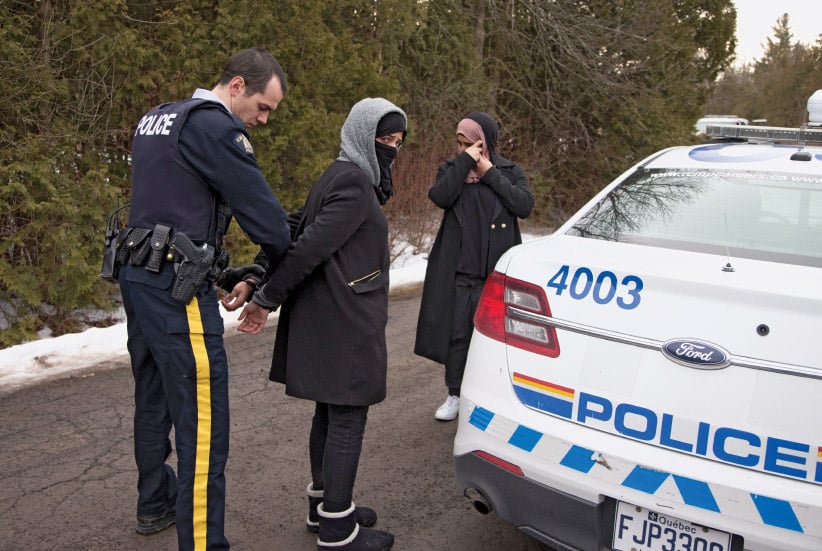 Two women claiming to be from Yemen are detained by a Royal Canadian Mounted Police (RCMP) officer after crossing the U.S.-Canada border into Hemmingford, Quebec on February 22, 2017. (Christinne Muschi/Reuters)

It’s good to know that with all the shouting about refugees that’s been going on lately, most Canadians seem to be keeping their cool. The federal government’s latest tracking poll on attitudes toward immigrants and refugees, released March 1, shows that fewer than a third of us think Canada’s refugee intake is too high. Two of every five Canadians think what Canada’s doing about refugees is just about right.

But a confluence of misapprehensions in both Canada and the United States could quickly jinx things.

For starters, quite a few Americans, as usual, are under the impression that Canada’s border controls and refugee screening systems are either too lax, or more just and fair, than the way things generally work in the United States. They’re neither. Similarly, Canadians are beginning to think that the internal American refugee adjudication system has tightened up terribly since Donald Trump was elected president last November. It hasn’t.

If heartwarming images of Mounties helping asylum-seekers slip into this country across remote and unguarded sections of the Canada-U.S. border are starting to leave you with the impression that some sort of flood of migrants has begun pouring into Canada lately, you would be wrong.

Ahmed Hussen, Canada’s new minister of Immigration, Refugees and Citizenship, is playing everything cool. Maybe too cool. If things go the way NDP Leader Thomas Mulcair says he expects, the warming weather could cause asylum-seekers to begin streaming north. Things could go sideways fast, and not just because of a possible hardening of Canadian attitudes.

Hussen inherited a department that was already woefully ill-equipped to handle a volume of cross-border asylum-seekers that has been on a steep upward climb for several years. The 2004 Safe Third Country Agreement between Canada and the U.S. reduced land-border asylum-seekers to a trickle, but then the numbers started climbing again, approaching pre-2004 heights long before Trump was elected president last November. By 2013, border claims were up to nearly 3,000, and by 2016 the number had reached 7,000.

MORE: Our profile of Ahmed Hussen

There’s been a definite spike in the cross-border numbers since Trump’s election, with sometimes 20 people a day arriving at some crossing points following Trump’s chaos-inducing Executive Order 13769, signed on Jan. 27. The order is sometimes described, unhelpfully, as a “Muslim ban.” But it’s just as misleadingly described by its own official subtitle, “Protecting the Nation from Foreign Terrorist Entry into the United States.” There’s no evidence it will do anything of the kind.

The confusion and panic the order set off continue even though it was temporarily suspended by a court judgement a few days later. (And even before the order’s suspension, Hussen and his officials said they’d secured assurances from their American counterparts that Canadian permanent residents from the countries listed in the order—Iran, Iraq, Syria, Somalia, Sudan, Libya and Yemen—would not be hassled at U.S. border crossings.)

Already drawn at least partly by impressions telegraphed by Prime Minister Justin Trudeau, Somalis, Eritreans, Ghanians and others awaiting refugee hearings in the United States are packing up and heading north, sometimes making dangerous nighttime treks across frozen prairie fields into Canada. Across the United States, well-meaning church and refugee-aid organizations are now talking about developing an “underground railroad” network to help worried asylum-seekers make their way into Canada. But that might not do them much good.

Canada’s refugee resettlement numbers are far more generous than the targets set by the United States. There’s nothing new about that, but there’s no practical difference between Canadian and American security controls and eligibility criteria. Once in Canada, northbound asylum-seekers are processed by the RCMP and the Canadian Border Security Agency then referred to the Immigration and Refugee Board—which is already fumbling through a backlog of 19,000 applications.

MORE: Does Canada have too many immigrants?

Rejected applicants will not simply be sent back to the United States to try their luck again. They’re expected to leave for whatever country will take them, or go back to their home countries. There’s a growing body of opinion in Canada that suspending the Safe Third Country Agreement—part of a suite of continental-perimeter measures between Canada and the U.S. to address post-9/11 security concerns—will somehow smooth things over by allowing people to make refugee claims at land border crossings. But Hussen’s not budging. “We will not get out of the Safe Third Country Agreement because the United States continues to meet its international obligations with respect to its domestic asylum system,” Hussen says.

But keeping your head in what looks like a crisis is one thing, and doing nothing in the hopes that the chaos will pass is quite another. And that seems to be what Canada would rather do right now.