Canada's fleet of 737 MAX 8s were in the air constantly on March 10. One of them criss-crossed North America for almost 17 hours. 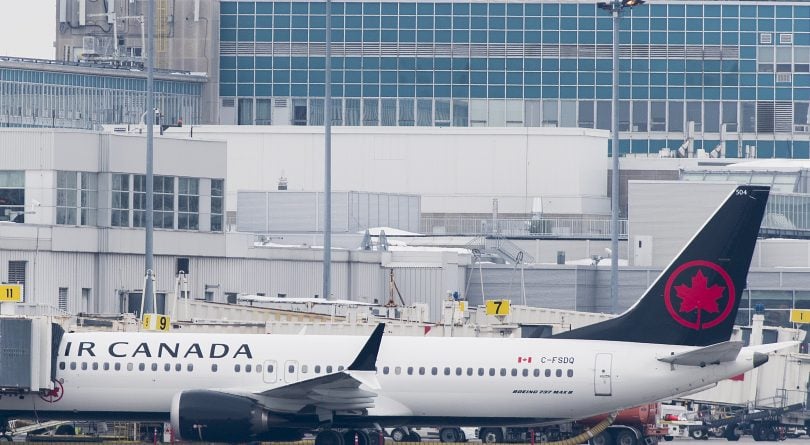 An Air Canada Boeing 737 Max 8 aircraft is shown next to a gate at Trudeau Airport in Montreal, Wednesday, March 13, 2019. (THE CANADIAN PRESS/Graham Hughes)

Most Canadians don’t identify airplanes they board by their tail numbers, a jumble of characters that distinguish one aircraft from another. No one who flew on C-GEHQ, a brand new Air Canada 737 Max 8 jet registered only this past February, would ever take note of that name. But C-GEHQ was a workhorse almost immediately, and racked up a lot of air miles on March 10, the same day Ethiopian Airlines Flight 302 crashed soon after takeoff, killing everyone aboard. The Canadian jet’s grueling schedule that day—along with publicly available data showing the flight plans of other 737 Max’s—provide a telling glimpse of how heavily the country’s major airlines had come to depend on the model before Ottawa prohibited airlines around the world from flying Max 8 or Max 9 aircraft in Canadian airspace.

No surprise, then, that carriers with finite fleets were scrambling on Wednesday to sustain business as usual, with thousands of passengers expecting no interruptions to their plans.

On March 10, C-GEHQ’s day started with an early departure from Vancouver to Palm Springs, California. The plane landed three hours and six minutes later, five minutes early. Before the day was out, C-GEHQ had flown to Calgary, back to Palm Springs, once again to Vancouver, and then on to its final destination of Montreal, where that redeye flight landed on March 11 at 7:47 a.m., 37 minutes late. All told, C-GEHQ spent nearly 17 hours in the air and racked up more than 11,800 air kilometres. It’s a sign of how much Canada’s airlines had come to rely on the Max 8 jets, which promised increased fuel efficiency and improved aerodynamics.

Less than an hour after that Montreal arrival on March 11, C-GEHQ took off for Toronto, the first of three flights on the day. Three more flights followed on March 12. On March 13, as a so-called “bomb cyclone” weather event brought high winds, blizzards and flooding to much of the American heartland, C-GEHQ was en route from San Francisco to Montreal, its flight path neatly avoiding—or so its passengers hope—the worst of the weather.

One thing C-GEHQ’s passengers would rather not know, at least until a safe landing in Montreal, was that Transport Minister Marc Garneau had announced a “safety notice” prohibiting 737 Max series aircraft from flying in Canadian airspace. According to Flightaware, before Garneau’s announcement C-GEHQ had four planned flights after Montreal—twice to Los Angeles and back. An even newer Air Canada Max 8 had six planned flights before the safety notice. The newest Westjet Max 8, less than a month into service, was on tap for four flights.

Canada’s combined fleet of 41 737 Max jets were constantly in the air. On March 10, 38 of the aircraft crisscrossed the continent, travelling as far afield as Hawaii and various Caribbean destinations—and even London, U.K. They touched down and took off often from Canada’s busiest airports, including Vancouver (26 times), Toronto (24), Calgary (22) and Montreal (12). On the map below, Air Canada flights are in red, WestJet in blue and Sunwing in orange.

In the wake of the Ethiopian Airlines disaster, Sunwing appeared the most cautious among the Canadian airlines. Flight-tracking websites had shown two of the four Sunwing 737 Max 8s as having not flown since March 11. One of the planes hadn’t flown since March 12. Indeed, on the evening of March 12, Sunwing issued a statement announcing it had grounded its 737 Max fleet. The airline cited “evolving commercial reasons … unrelated to safety,” including “airspace restrictions being imposed by … partner destinations.” Air Canada and WestJet both announced they’d comply with the government directive.

When Canada grounded all 737 Max 8s, it joined most global carriers in doing so. Hours later, U.S. President Donald Trump issued an “emergency order” to do the same.