A hunting party in Nunavut stumbled upon a rare sight: a tree stump poking out of the permafrost. However it got there, the wood will likely tell scientists secrets of the distant past 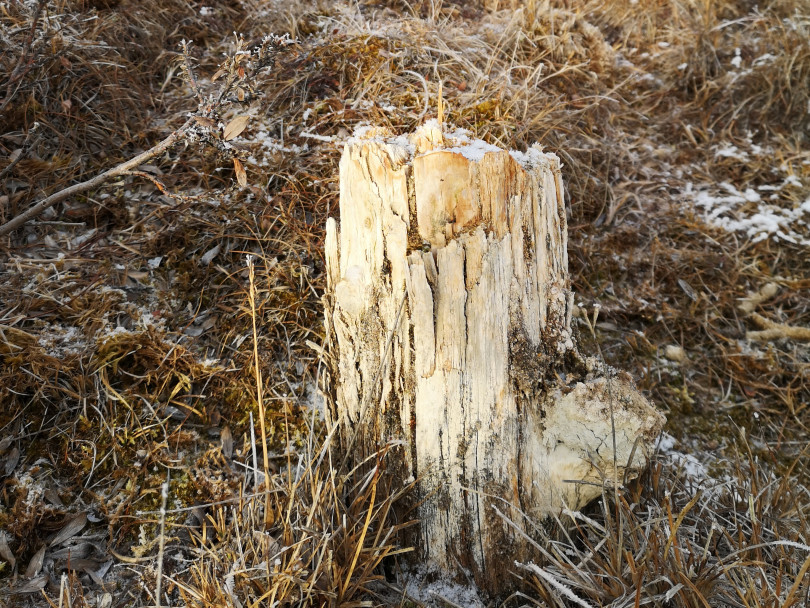 His hunting party had set out under a muted sky from Cambridge Bay, Nunavut, on the day Naikak Hakongak spotted something almost never seen on the Arctic tundra.

The group of six, some with rifles slung over their backs, had been crossing the rocky landscape in a caravan of all-terrain vehicles. Only a skiff of snow covered the ground that first Saturday in October—less than usual for the time of year.

As the terrain grew more hilly, Hakongak’s hopes of spotting caribou rose—the animals were known to run through the area they call Amagalik. Then, as the hunters’ path dipped into marshy lowlands, Hakongak spied what he first thought was a cylindrical rock sticking out of the bog. “I did a quick U-turn and said ‘This is a tree stump!’” the 56-year-old recalls. “My first thought was ‘Wow, this is quite the strange find.’”

Located on Victoria Island, Cambridge Bay is roughly 600 km above the treeline, the latitudes above which the climate is too cold for trees to survive.

And yet here in a frozen bog about 70 km northeast of Cambridge Bay, emerging from the surrounding moss as if waiting to be discovered, was a jagged, blond stump about the size of two stacked paint cans.

The other gobsmacked hunters stopped and snapped photos, taking note of the stump’s GPS location. “In my estimation, it’s a pretty amazing discovery,” said Hakongak. “You find something like that once in your lifetime up here.”

Forests covered many parts of the Arctic millions of years ago, and pieces of fossilized wood have been found in Nunavut, on Bylot Island, Ellesmere Island and Axel Heiberg Island, that date back 45 million years.

Robert Blanchette, a plant pathology professor at the University of Minnesota, has studied wood from a mummified forest discovered about a decade ago on Ellesmere, much farther north and closer to Greenland. In an email, he described this latest find as “thrilling.”

“The wood is a link to the past, providing information about what the earth was like millions of years ago,” he said.

RELATED: A century after the Halifax explosion, grim reminders can still be found in trees

It’s difficult, Blanchette added, to determine where the newly discovered tree stump came from: it may be driftwood dating back a few thousand years, or it may be wood from an ancient forest millions of years old.

If the stump is driftwood, it could have ended up in its present location as the result of changing sea levels over the past several thousand years, said Blanchette. The coast may have been much farther inland then, and ocean currents can bring wood from distant places, even Siberia, to different places in the Arctic. (Albert Edward Bay, about 16 km away, is the closest current coastal location to the stump, said Hakongak.) Once deposited, any wood would have been covered in sediment and, in a low-oxygen bog environment, well-preserved for millennia.

If the stump was part of an ancient forest, Blanchette speculates, it was likely buried or frozen by a catastrophic event, like a landslide, then exposed due to erosion and melting permafrost. (The wood from the frozen forest he studied on Ellesmere was between two and 10 million years old.)

As the planet warms, still-rare finds of ancient wood like this may become more common, adds Marie-Eve LaRocque, a spokesperson for Polar Knowledge Canada, the federal organization that operates the Canadian High Arctic Research Station in Cambridge Bay.

The research station plans to get a sample from the stump and send it for analysis to scientists at Saint Mary’s University in Halifax. The first step is to have the wood radiocarbon dated; the technique is reliable for dating items less than 50,000 years old, and the results would tell scientists if the wood is more recent jetsam or something far older.

Yet the stump has much more to tell us than its age, say government scientists. If it is driftwood, it could provide information about past sea-ice coverage and ocean currents, helping researchers understand how Arctic ocean circulation has changed over the past 12,000 years. Wood from ancient fossil forests, meanwhile, can provide insights into past planetary warming events and how ecosystems, especially plant communities, might respond as the Arctic warms.

The mysteries the wood holds may take years to unravel, and it remains to be seen whether researchers will ever pinpoint the origins of the stump. Yet Hakongak and his hunting mates are sure of one thing: their unique discovery in the rolling hills of Amagalik is already one for the ages.

MORE ABOUT THE ARCTIC: