Thunder gone under: The story of the world's longest maritime chase 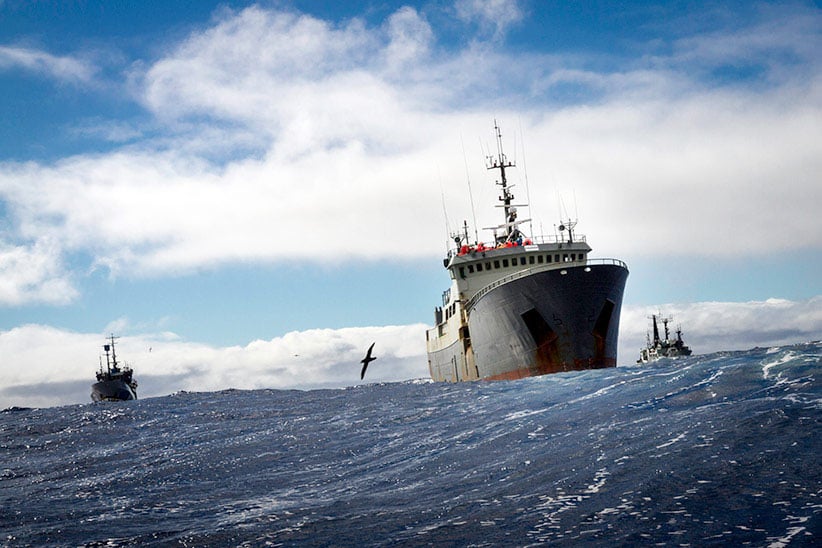 The captain of the MV Thunder didn’t go down with his ship. Instead, he stood cheering and applauding in a life raft as the 62-m fishing trawler sank beneath the glassy surface of the Atlantic, 200 km off the coast of Gabon. Then he and his crew of 40 meekly allowed themselves to be rescued by the boat that had been pursuing them for 110 days.

It was a bizarre finish to the world’s longest maritime pursuit, one that began in the icy waters off Antarctica last Dec. 17, and ended on April 6, practically on the equator, near the tiny islands of São Tomé and Príncipe, some 19,000 km away. Reports suggest that the captain of the Thunder—a notorious pirate fishing vessel that had changed its name and flag at least three times in recent years—deliberately scuttled his vessel, although he claims he was hit by a passing cargo ship. It makes little difference. The activists from the Sea Shepherd Society had made their point: that they were willing to go to the very ends of the Earth to protect the Patagonian toothfish.

The environmental guerrilla group is best-known for its efforts to stop whaling. But a landmark ruling last spring by the International Court of Justice in the Hague forced the Japanese to suspend their “scientific” hunts in the Southern Ocean, and freed Sea Shepherd to go after new targets.

The toothfish, as its name suggests, isn’t cuddly, although the deep-water predator’s dense flesh is valuable enough to be known as “white gold” in fishing circles. Interpol, which issued a warning about the Thunder in December 2013, estimates that its owners—suspected to be a Spanish fishing company—have earned more than US$60 million from the vessel’s illegal catches in protected waters since 2006.

Sea Shepherd launched “Operation Icefish” in early December, dispatching two of its boats, the Bob Barker and the Sam Simon (named, respectively, after the former host of The Price Is Right, and the recently deceased co-creator of The Simpsons), from its Australian base to the Antarctic. Turning off their GPS transponders, they attempted to get the drop on a group of toothfish poachers they call “the Bandit 6.” The Bob Barker was the first to arrive and located the Thunder in the remote Banzare Bank a week before Christmas. The vessel cut loose 25 km of gillnets and attempted to flee, steering first into pack ice, then directly into bad weather, but the Sea Shepherd ship kept up the chase. 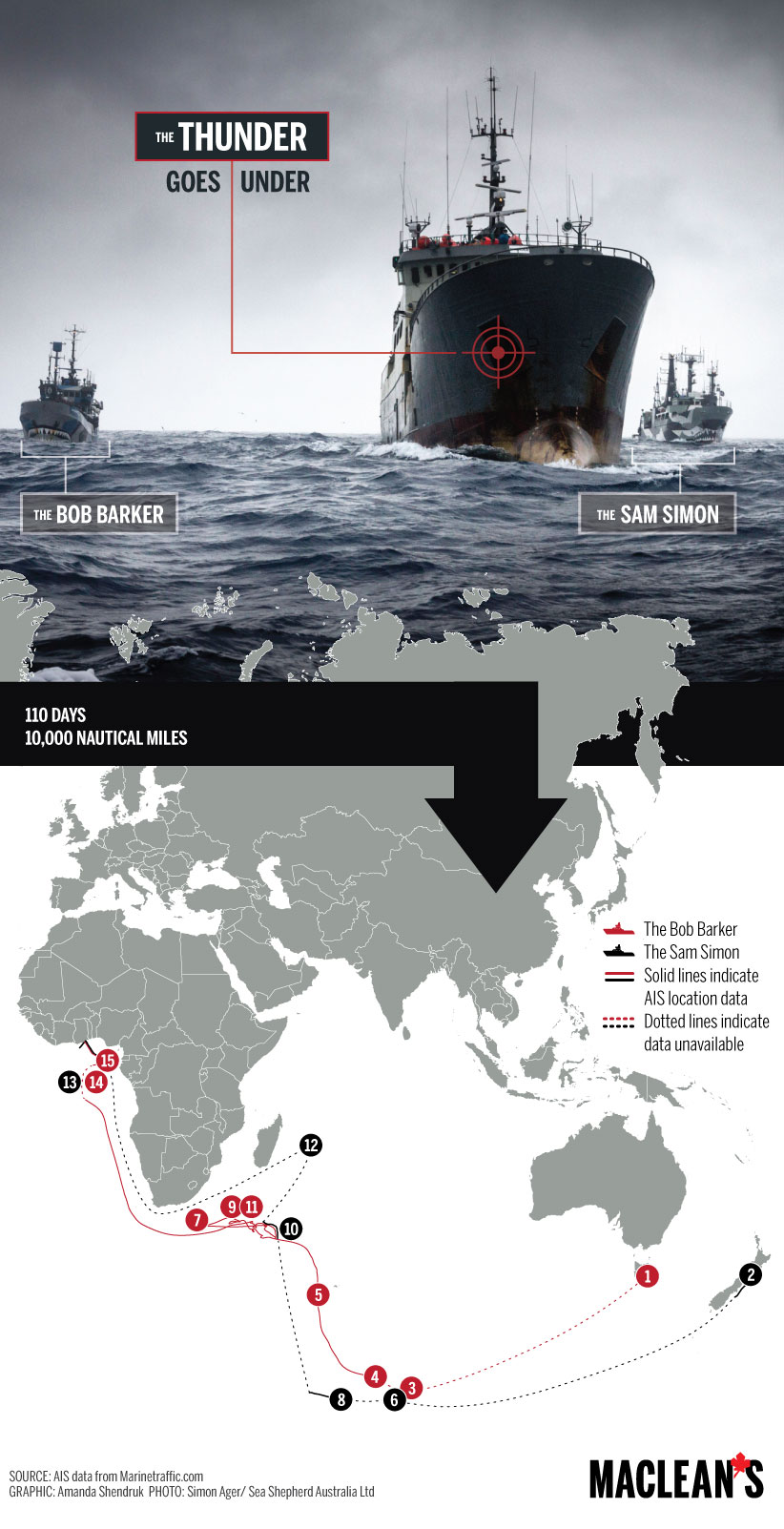 By late January, with the two vessels still 1,850 km off the southern tip of Africa, the pursuit was already the longest on record. Direct confrontations were few and far between. Toward the end of the first week of February, the Thunder again dropped its nets, only to have them cut by the Bob Barker. Afterward, there was a near collision in heavy seas. On Feb. 19, with the Sam Simon now having delivered fresh supplies and joined the hunt, small Sea Shepherd boats tried to deliver messages to the Thunder crew, believed to be mostly poor Indonesian sailors. Officers of the vessel responded by throwing lengths of chain and other metal objects, almost decapitating a photographer.

But mostly, the chase was an exercise in patience. Seeking to conserve fuel, the Thunder often chugged along at low speeds, or stopped altogether. It was boring work.

On March 26, the 99th day of the pursuit, the Thunder captain, believed to be Chilean, radioed to say that one of his Indonesian crew had tried to commit suicide. It’s not clear if it was a ruse, but he refused all offers of assistance. Little more than a week later, he abandoned his listing ship in calm waters. A boarding party from the Bob Barker found the Thunder’s hatches and watertight doors had all been left wide open.

The Thunder’s captain and crew are currently in the custody of the São Tomé coast guard, being put up in hotels around the capital city. Throughout the chase, Sea Shepherd had provided regular updates to authorities. The Sam Simon delivered the Thunder’s recovered gillnets, and documentary evidence of the illegal toothfish catch within them, to police on the Indian Ocean island of Mauritius in March. Australia’s fishery-management authority, which helps to oversee Antarctic waters, says it’s waiting to see what the government of São Tomé will do. Although the answer may well be not much; it’s one of the poorest nations on Earth, and the local press has reported that the Thunder was headed to the country to change its registration and buy a fishing licence. (Attempts to contact the coast guard and government were not successful.) When Malaysian officials stopped the Thunder for illegal fishing in May 2014, they ended up letting the vessel go, after someone paid a $90,000 fine.

But with the poaching vessel now resting four kilometres below the surface, Sea Shepherd has declared Operation Icefish a success, and set about maximizing its potential. Footage shot on board will end up as part of a reality-TV show, and the “inside story” of the pursuit has been given to the New York Times as a “worldwide exclusive.”