Going in one direction, slowly

With a civic drama nearing its end, Toronto faces an identity crisis 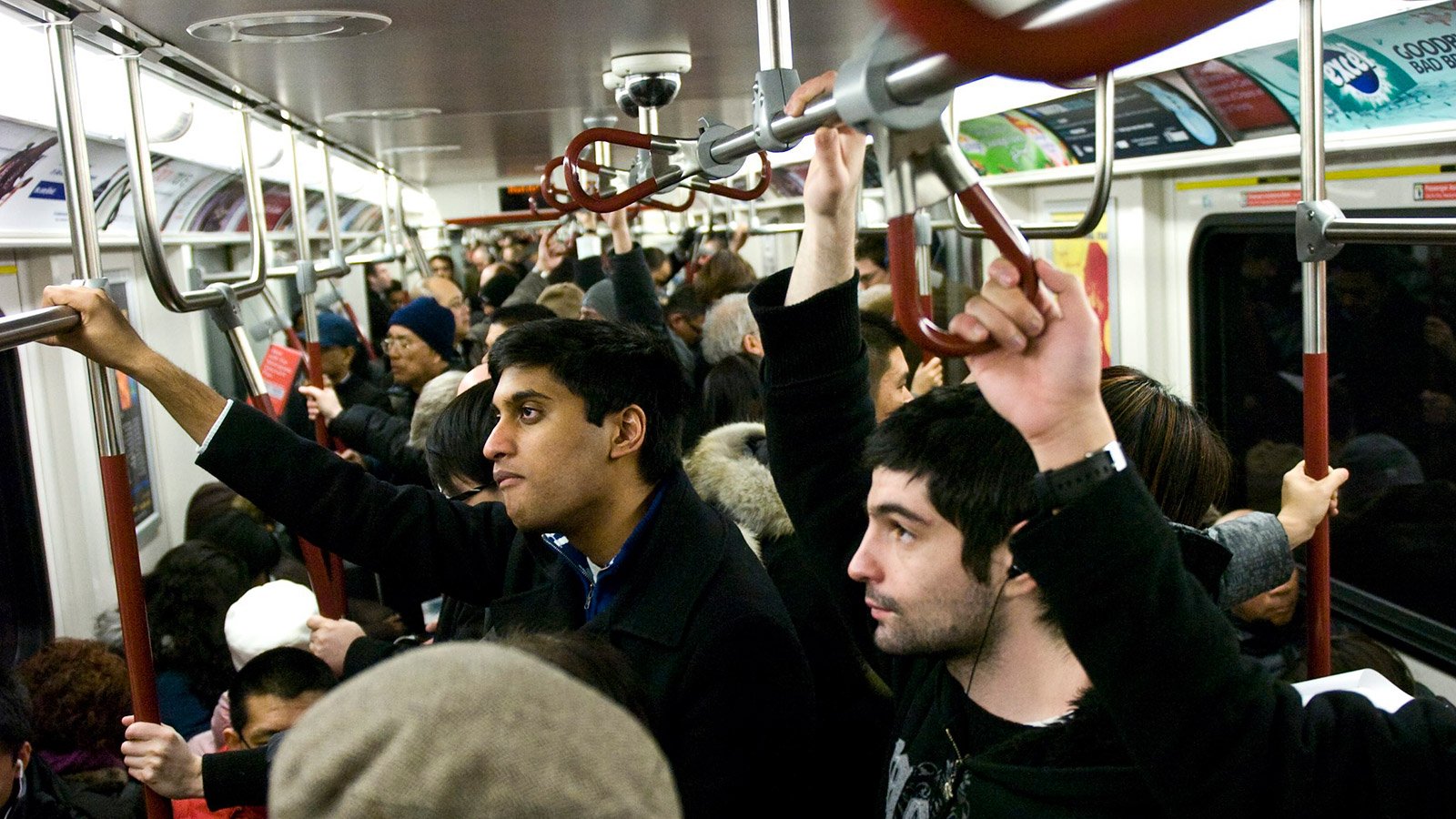 Toronto feels somewhat Parisian these days, with upper-income folks claiming the city centre, and the rest streaming back and forth on public transit from suburbs we never see.

Yes, downtown Toronto is a hive of diversity in retail stores, offices, universities, clubs and streets, but a great proportion of these people go home at the end of the day to their challenging “priority neighborhoods.” For the first time in my life as a white, blue-eyed male, I am a conspicuous minority in any subway car I enter, as a wholly new population inhabits a world beyond the city centre. One has a sense that we live as tourists in each other’s lives, hoping for the best. This is the undertone of the civic election campaign in Toronto: How many cities are we, and what does this portend?

On broad measures of quality, Toronto ranks high on global lists for livability and economic fertility. It is something of a thrill to stroll through downtown these days, surrounded by thrusting towers, luxury stores and sexy people sporting earphones and architectural haircuts. Avenue Road at rush hour, connecting Bay Street to the lush inner suburbs, is a fashion runway for expensive cars—easily a million dollars worth of BMWs, Audis, Mercedes, Maseratis, Porsches and an occasional Ducati awaiting the light change at any given corner. Between 2006 and 2011, the population of central Toronto grew by 16 per cent—three times the rate of previous decades. Bloor Street is reborn as a luxury shopping promenade up there with the rest of the world in glitz, anxiety and profit margins. Jobs are flowing back downtown into new knock-off office towers. Crime rates are falling faster than police budgets soar. Hollywood stars walk red carpets. Insouciance rules the sidewalks. We love it: and yet.

Middle-class neighbourhoods are disappearing from Toronto as poor ones expand. In its annual Vital Signs report, the Toronto Community Foundation (TCF) speaks explicitly of “three cities” sharing the bosom of a single city state. TCF documents the collapse of middle-income neighbourhoods from 58 per cent of the city in 1970, to 29 per cent in 2010. Low-income neighbourhoods have grown from 24 to 38 per cent of the landscape, while “very high-income” neighbourhoods have doubled in proportion to 16 per cent in the same period. (“Very high” means illuminated stone house facades at night, expansive Halloween displays and streets lined with service vehicles during the day.)

This reflects a broader income polarization, which clearly overlaps with ethnicity, immigrant status and residential location in Toronto. The least diverse neighbourhoods in the city are the white, affluent ones near downtown: Rosedale, Lawrence Park, Moore Park, Forest Hill, Leaside, the Beach, Kingsway South and the righteous Annex. Beyond a few downtown enclaves, the real diversity of Toronto resides in the suburbs, squeezed between central Toronto and the booming communities beyond the city’s formal boundaries. (Outside Toronto itself, the TCF refers to prosperous “ethno-burbs,” the Chinese in Markham, the South Asians in Brampton—more cities still.) In Toronto’s own suburbs, many low-income citizens are falling even further behind the rest by measures of income, employment and social mobility.

These euphemistic “priority neighbourhoods” are the base of Mayor Rob Ford’s popularity—and now, that of his brother Doug, replacing him as candidate for mayor—which is neatly captured by Rob’s earlier vow to be “the subway mayor.” The word “subway” has become a stand-in for equality, as Toronto grapples with gridlock that clogs up pretty well everything. How do we encourage social mobility when so many low-income people in the suburbs can’t get to work, school or play without numbing trips on sclerotic buses and streetcars—or on the few subway lines that do exist, jammed in à la Tokyo, with icky body contact, redolent of the flu?

Why should low-income people with the farthest to travel downtown for jobs have the least convenient means to get there, or have to shift from light-rail transit to subways in the freezing rain? Rob Ford’s personal haunts favoured these very neighbourhoods, him cavorting with the worst of their residents. Damn the economic analyses that show subways to be awfully inefficient in low-density suburbs. Immigrants and the poor have as much right to subway speeds and convenience as bankers travelling between Bay Street and Lawrence Park. Vote for Rob Ford—now Doug Ford—whose gravy train runs underground.

Thus Toronto city council and even the Ontario government have waffled and reversed themselves at great cost in money and time, deciding on modes of transit to open the arteries of the city, with a sharp eye for votes in the suburbs. Meanwhile, Civic Action, another Toronto umbrella group trying to meet the challenge of living in several cities at once, published a report last week claiming that 83,000 people between 15 and 24 years of age are neither in school nor employment in Toronto, and youth unemployment among some visible minorities approaches 30 per cent. We downtowners see these people’s neighbourhoods through our car windows as we head to the airport or the cottage for a nice time. They see ours hardly at all.

In the mayoralty race, these realities do come up, but often as single points in this or that proposal. Missing is the broader context, in which Toronto faces the troubled parts of its economy. Prosperity is the basis for everything we want in the city—engaging jobs, disposable income, culture, sport, entertainment, good public services, nannies, nice shoes—and social mobility for the 80,000 new residents that arrive annually from abroad. The TCF reports that 75 per cent of Toronto’s population is either foreign-born or the children of such (ride the subway and live the fascinating sociology). It is prosperity that will raise up all the people, more than the best efforts of Toronto’s many impressive NGOs seeking to lend a helping hand (and must they continue).

The most effective voice speaking about prosperity comes from the Toronto Region Board of Trade (on whose advisory board I sit). It is the board of trade that last year launched the strongest campaign to address gridlock, including support for new taxes and fees to fix it (from the business community!). And, this year, the board published a broader analysis of the region’s economic situation, explicitly tied to the provincial and civic elections.

Yes, the board’s 2014 “scorecard on prosperity” placed Toronto a high third among 24 peer cities in the United States and Europe, by various measures. But there are striking anomalies behind the curtain. “Frayed transportation infrastructure, lagging innovation and productivity and muddled regional governance” pose substantial threats to Toronto’s economic prospects, says the latest report, “Toward a Toronto Region Economic Strategy.”

Who knew that Toronto posted negative six per cent productivity growth between 2000 and 2010, compared with 20 per increases in San Francisco, 14 per cent in New York, 10 per cent in Boston, Seattle and Calgary? The real GDP output per worker in Toronto continues to decline, as other cities power up. This is one of the great mysteries about the economy, which applies to much of Canada. How is it, with our high education metrics, open markets and encouraging tax regimes, that productivity lags so far behind competing regions? Despite the concentration of universities and research institutes in Toronto, the city ranks last in the number of patents produced among its urban peers. Do we lack the creativity gene—or the greed gene? Are we old and complacent at heart?

Eleven of Toronto’s top economic clusters lost jobs between 2000 and 2012. Thank the gods for the banks and construction companies that picked up the slack. The prevalence of low-productivity jobs elsewhere underlies the landscape of stagnant wages and limited prospects for the people who need them most. Toronto’s unemployment rate remains oddly, stubbornly high.

So, several themes emerge as context for next month’s civic election.

First, Toronto must pay more attention to the narrowing grounds of its prosperity, to identify the causes of erosion and to find new ways to manage change. (Cogently, the board of trade last week suggested that the power to define regional transportation networks be moved up from city councils to Metrolink, the provincial agency responsible for transport planning—technocracy rather than democracy when rubber hits the road. We need a Robert Moses.)

Second, mobility is the pressing issue of the day—both physical and social mobility. They are linked, but social mobility needs even more focused attention in the context of increasing diversity, inequality and residential segregation.

And, oh yes—to get back to Paris: beauty. Toronto in no way resembles Paris—nor Seoul, Montreal, Vancouver, Orangeville, Ont., etc.—in the aesthetic quality of its public spaces. Toronto’s streetscapes, subway stations, plazas, parks and public buildings are a disgrace of tattered poles and wires, a plague of signs and traffic lights, a crush of tawdry transit stops, missing ceilings, rusty floors, garish lighting, dead street trees, ugly news boxes and rickety benches. Among the functional czars the city needs, a czar of beauty must be found.

Prosperity, mobility, beauty: There’s the winning platform for the mayor of a promising town.