Toronto van attack: The rush to blame immigrants and Muslims after a mass killing

Stephen Maher: How weaponized racism is distracting from the real crisis—the lethal mixture of hateful online communities and male violence 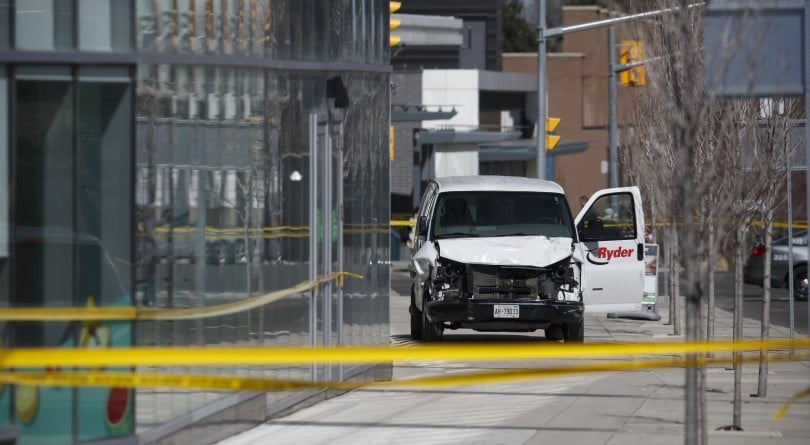 Police inspect a van involved in a collision that killed 10 people at Yonge St. and Finch Ave. on April 23, 2018 in Toronto. (Photo by Cole Burston/Getty Images)

In the terrible time between a mass killing and the moment when we learn the name of the killer, people who believe that there are too many Muslims in Canada are quick to share their feelings.

If they work in the media, they are careful about how they express it—posing questions, raising possibilities—but the grass-root bigots don’t have to be coy.

Have a look at the replies to a tweet from Andrew Scheer on Monday afternoon, after the guy drove onto the sidewalk on Yonge Street but before we knew his name.

The commenters didn’t need to know anything about him to know who to blame: Justin Trudeau, Canada’s immigration laws and Muslims.

Some public figures—like Rebel reject Faith Goldy—share the same message, and some journalists from mainstream outlets are clearly more than ready to get the message out, if the message turns out to be that the jihadis are killing Canadians.

It’s nauseating, because they are obviously hoping to be shown to have been right all along: right to warn against Trudeau’s immigration policies, right to warn about the enemies within: Muslim fifth columnists who are scheming to unleash their demographic sneak attack and force us all to live under Sharia law!

This is a powerful undercurrent in 21st-century public life. It is in the back of everyone’s mind whenever there is a mass killing, whenever we debate immigration, whenever we are called on to vote for a values test or support a barbaric-cultural-practices snitch line.

It’s the oldest con in the world. Vote for me because I can protect you from the evildoers. The only thing that changes is the bogeyman.

In Canada, we were stampeded into Confederation by overblown warnings about Fenians—Irish republicans who were going to force us all to worship the Pope. As the Fenian threat receded, we were warned about bomb-throwing anarchists, then, for a long time, communists.

The con always works, to some extent, in part because the warnings are always true, to a point. The Fenians gunned down D’arcy McGee, a humane, philosophical politician who turned his back on Irish nationalism to help found Canada. The anarchists killed U.S. president William McKinley. The communists killed millions and did their best to destroy our society.

And the jihadis brought down the twin towers, cut off the heads of a lot of people and continue to butcher innocents.

We have to go after them, but we can’t go after Muslims in general, the people who suffer the most from jihadi terror. Going after Muslims will make it harder to fight the jihadis, and most importantly, we are not supposed to go after anyone because of their race or religion.

I thought we had all agreed on that in the last century, but there is a new populist wave rising that disregards the hard-learned lessons of the Second World War, and demagogues are getting a lot of political energy stoking anxiety about Muslim immigration.

It is more worrying than run-of-the-mill anti-immigrant racism because—like 20th century anti-semitism—it has the characteristics of a conspiracy theory, with entrepreneurial social-media hucksters making up stories that are shared on Facebook and Twitter.

It is weaponized racism, and it is politically dangerous in a way that other forms of racism are not, likely because it is funded by the Mercer family and other American “philanthropists.” Tax records show they spent at least $57 million from 2001-2012 convincing people that Muslims are dangerous. The Mercers even partnered with Canada’s own Rebel to produce anti-Muslim videos.

The poison is amplified by Russian bots, politicians who blow whistles only dogs can hear and grassroots groups—many of whom have religious or ethnic reasons to dislike Muslims.

And, like the Orangemen and anti-communists of the past, the anti-Muslims are right, in a way, to warn about the jihadi danger. The attack on the twin towers, the shooting at Charlie Hebdo, the tragedy at the Bataclan and our Parliament Hill shooting were calculated attacks on the things we love.

But take a step back and look at recent mass killings and you see the carnage is not caused by Islamists. It is caused by isolated, deranged young men who are psychotically angry about various things. Some have been taken in by ISIS propaganda, some by anti-Muslim poison, some by gun rights, some by a fixation on other mass shootings. Some remain mysterious.

Many of the killers have been drawn into sick corners of the internet, like the accused Toronto killer, who appears to have belonged to an unbelievably creepy online community for men embittered by their failures to have sex.

One of the problems with all the ignorant screaming about Muslims is that it distracts us from discussing the real problem behind the mass killings—the lethal mixture of hateful online communities and male violence.

The bigger problem is that this hateful nonsense victimizes Muslim Canadians who want to live in peace, including people who have moved here to escape sectarian killers in their home countries.

Canada is too diverse and open for someone to win power by campaigning against Muslims. Neither France nor Britain—which both face difficulties integrating immigrants—have elected nationalists.

Still, anti-Muslim sentiment is socially destructive even if it is not a political threat. Our politicians would be wise to treat it with caution, avoid playing to the bigots and remember that if they play with fire they might get burnt.