Trans Mountain and First Nations along the pipeline route: It's not a dichotomy of 'for' or 'against'

Some First Nations have picked sides in the battle over the Kinder Morgan pipeline but many groups haven't. Now their leaders are feeling the heat. 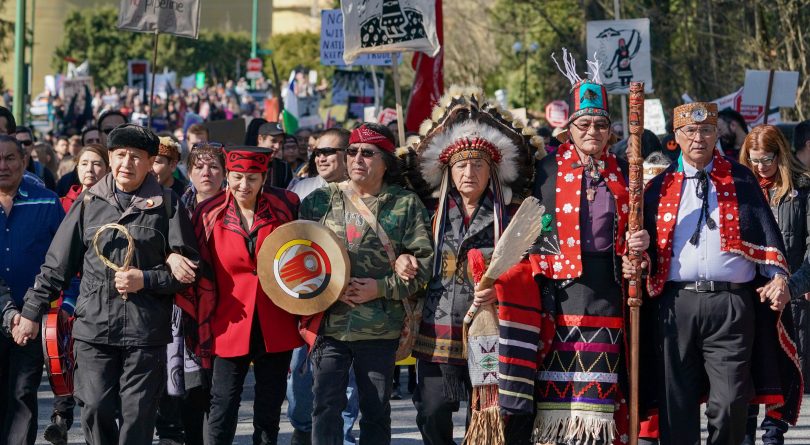 It appears easy to lump in the Musqueam Indian Band with the other First Nations communities who stand against the Trans Mountain pipeline expansion. The National Energy Board (NEB) website lists the Vancouver-based band second among the seven Indigenous groups who’ve filed judicial reviews to overturn the Trudeau government’s project approval. On development issues, Musqueam often acts in tandem with two other bands whose unceded territories also cover Vancouver and the pipe’s Burnaby terminus: Tsleil-Waututh and Squamish, which count among the project’s most vocal opponents. A major anti-pipeline accord by several dozen First Nations across Canada was inked by chiefs in 2016 at the Musqueam Community Centre.

Musqueam Chief Wayne Sparrow has taken it upon himself to correct this confusion, which still pops up occasionally in B.C. and national media. The band withdrew last fall from the court challenge—“a notice of discontinuance,” in the NEB website’s legalese—in favour of negotiations with the Trudeau government. In mid-April, after Kinder Morgan’s threat to nix its $7.4-billion project inflamed the debate, Sparrow issued a news release clarifying that Musqueam is, in fact, discussing conditions with Ottawa for possible approval, and agreed with a fellow chief that not all First Nations oppose the pipeline, including many along the proposed route, which twins an existing Edmonton-to-Vancouver energy conduit.

Sparrow’s bid to clear up matters kicked up much dust. It sounded to some Musqueam members like an endorsement, and they insisted the chief’s voice isn’t the same as the nation’s. “To me, it is almost an act of war and destruction on the land that our ancestors have been on since the first sunrise—by our own people,” says Audrey Siegl, who has helped lead demonstrations against the pipeline. Mike Sparrow, a cousin to the chief, suggested on social media that the salmon should be taken off the band’s crest, given how a bigger pipeline would boost oil tanker traffic and thus the risk of a diluted bitumen spill into the Salish Sea and Fraser River’s mouth. “With all the federal money and the oil money, they’re getting bought out,” he says over the phone while out on his boat, fishing for crab not far from the Vancouver airport. “It’s bringing out the greediest of the greedy in native politics.”

READ MORE: How the Senate is cracking down to get Trans Mountain built

Faced with claims the news release signalled a secret pipeline agreement, the chief spent days explaining his intentions to furious and perplexed band members. “Some of them are in my own family—my sisters, they’re 100 per cent against it,” Sparrow says. At a time when other key players in the Trans Mountain saga are entrenched in opposing camps—the B.C. government and west-coast environmentalists against the business community and governments of Alberta, Saskatchewan and Canada—some Indigenous leaders are doing likewise, vowing to fight or getting behind the project by touting the economic development and multi-million-dollar benefit agreements that could flow from it. Yet others, like Chief Sparrow, voice a messier and less convenient truth: it’s complicated.

There are 120 Alberta and B.C. First Nations groups on the Trans Mountain corridor, with diverse sets of opportunities and risks, economic realities, political approaches and territorial stakes. Little surprise that many don’t fit into bucket A or bucket B, eager as some are to simplify the fractious debate.

To relatives and residents, Sparrow clarified and reclarified that Musqueam wasn’t even in talks with Texas-based Kinder Morgan, let alone had a nascent support deal. The band is negotiating with the Trudeau Liberals about its upgraded maritime protection and spill response, as well as co-management of fisheries, says the chief, who’s also an active fisherman. If there is a spill that harms prawn, salmon or crab stocks, Musqueam council wants the consequences spelled out. “We just figure we have a better opportunity sitting at the table than protesting,” Sparrow explains. He also echoes industry warnings that killing the pipeline expansion would mean more oil moving by train, and the main trunk of the Canadian Pacific hugs the Fraser. The prospect of a derailment, says Sparrow, is a greater threat to salmon stocks than a pipeline breach.

Perhaps most controversially, Musqueam’s elected leader cited Cheam First Nation Chief Ernie Crey, who in April emerged as the most vocal Indigenous leader advocating for the pipeline. He, too, makes the pipelines-over-rail argument, and argues that environmentalists use Indigenous protesters to “red-wash” their position. His band in the upper Fraser Valley is one of 43 Indigenous groups to sign or conditionally accept mutual benefit agreements with Kinder Morgan worth millions (most terms are secret, but the tiny Peters Band, in Hope, B.C., used money to give each member $30,000), and Crey says killing the project will deprive impoverished nations of much-needed support.

But benefit deals should not be equated with glowing endorsement. Yale First Nation’s chief says he had no choice—Ken Hansen’s Hope-area band needed to seize Trans Mountain’s cash deal to lift it out of “despair,” as he put it. “When we signed this deal, I felt a lot of shame,” Hansen told APTN. 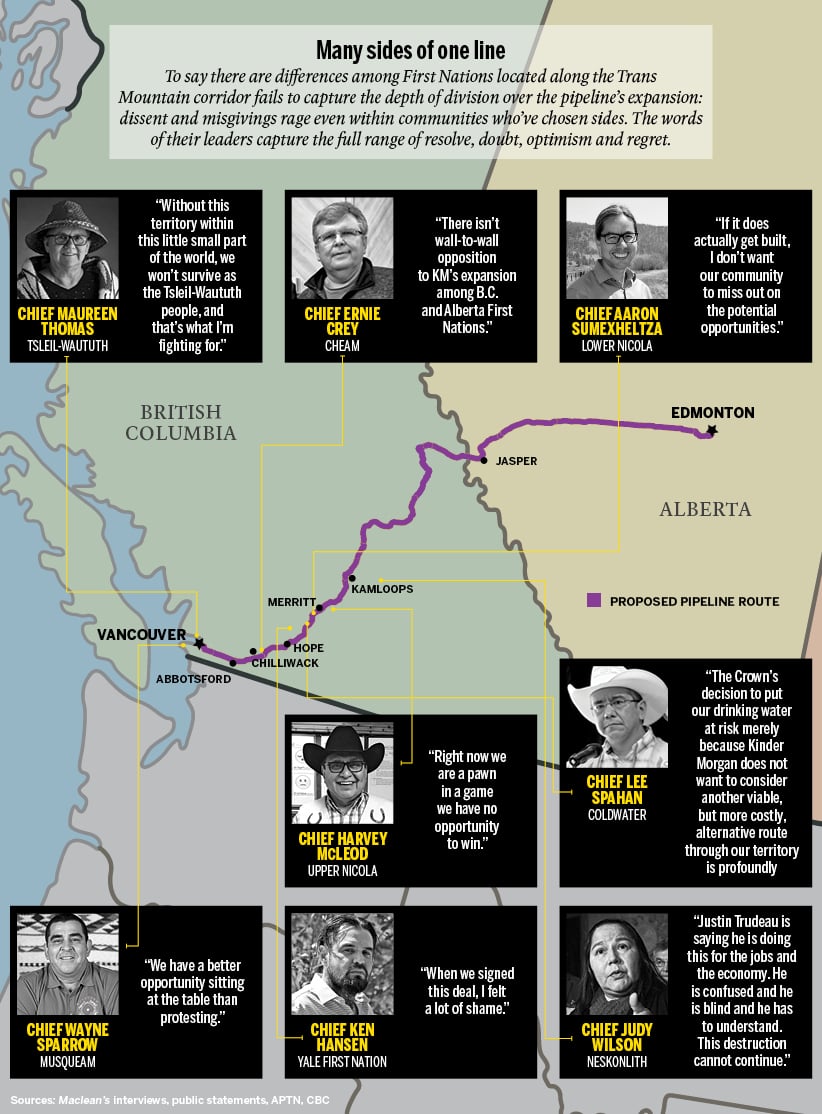 The Lower Nicola Indian Band has held off finalizing its agreement, even though members voted 60 per cent in favour of it in a referendum last year. An okay from Chief Aaron Sumexheltza’s community had been a key goal for Kinder Morgan; while the pipeline crosses several B.C. nations’ traditional territory, it only crosses ﬁve bands’ reserves, including Lower Nicola’s. “It goes right next to homes, through their backyards,” he says. If the expansion goes ahead, that could mean joint-venture projects for Lower Nicola’s development agency, upgrades to the fire hall, security jobs and training for band members, and more. For now, though, they’re weighing the contracting terms and environmental risks before signing off; the referendum approval would give Sumexheltza comfort, were it not for the fact that only 19 per cent of eligible members actually voted. (Other communities rejected benefit agreements by member votes with similarly low turnouts.)

Lower Nicola had some passionate voices opposed and in favour, but as polls suggest in much of the country, many residents remain in the middle, Sumexheltza says. “I could characterize a lot of people as not big supporters of pipelines, generally. But they felt that the project was going to go ahead, and if it was to go ahead, they wanted our community to see the benefits,” he says. Sumexheltza hopes Indigenous leaders can help find solutions that offer good jobs, healthy economies and sustainable environments where, he says, “we wean ourselves off fossil fuels at a reasonable, realistic rate.” If Sumexheltza’s balance-seeking echoes Trudeau’s, his politics don’t: he sought a nomination for the B.C. NDP in the last provincial election, yet keeps his distance from Premier John Horgan’s staunch pipeline opposition.

READ MORE: It’s time for environmentalists to move on from the Trans Mountain pipeline

And just because bands are fighting to overturn Trans Mountain’s approval at the Federal Court of Appeal, they’re not necessarily fighting the pipeline to the bitter end. Some are staunch opponents, most notably Tsleil-Waututh, whose reserve sits across Burrard Inlet from Kinder Morgan’s tanker terminal, and which set up the Sacred Trust Initiative, dedicated to stopping the project. Musqueam’s request for judicial review, on the other hand, was a narrow complaint about inadequate federal consultation, so when Ottawa approached the band for talks, Musqueam abandoned the court action. Coldwater, whose reserve has the original Trans Mountain pipeline from 1953 running through it, specifically opposes the proposed route, saying it threatens a community aquifer. It’s open to other alignments.

Nearby Sumexheltza’s community is Upper Nicola Band, which like Musqueam filed judicial review to claim inadequate federal consultation. Upper Nicola was so close to a pipeline deal that it scheduled a 2016 member ratification, but called it off two days before the vote was supposed to happen. Kinder Morgan and the council came close, says Chief Harvey McLeod, but too many unknowns remained: “We couldn’t get there.” His band had a further quarrel with the federal government’s late-stage consultation. But when asked if he opposes the project outright, McLeod won’t answer. He reckons opinion is evenly split among his members between those who see risk in the pipeline and those who see opportunity.

‘I’m participating because I have to. I have no other alternative’

So, as he’s fighting Ottawa on the pipeline in one way, McLeod is collaborating in another. He sits on the federally funded Indigenous Advisory and Monitoring Committee, co-chaired by the pro-pipeline Chief Crey, which is tasked with assessing safety and impacts of the Trans Mountain expansion, as well as the existing line. This is consultation and Indigenous participation that McLeod is going along with, but the committee’s mandate explicitly states that doing so doesn’t indicate a First Nation’s support. “I’m participating because I have to. I have no other alternative,” McLeod says. “Just to ensure our community is included, and that we know what to do and who’s going to be in charge and the process that we will follow when a spill occurs.”

A Tsleil-Waututh member is also on the monitoring committee—a signal of how widespread the bet-hedging is. With considerable land holdings and developments on the Vancouver area’s North Shore, that band is one of B.C.’s most business-savvy, and Upper Nicola is looking to follow suit. This spring, it announced a deal with electricity giant Fortis on an 80-hectare solar farm, which would be the province’s largest.

After the community endorsed the idea in an April referendum, McLeod announced the project at the solar farm’s future site, along Nicola Lake. On the opposite shore is the original Trans Mountain pipeline, and where Kinder Morgan’s expansion is supposed to go. “We were talking to our ancestors during the ceremony,” Upper Nicola’s chief recalls. “And I looked across the lake and thought, god dang, 20th-century thinking meets 21st-century thinking.”

McLeod and other B.C. chiefs will have to cope with what’s gained and lost if a new pipeline is built alongside its older sibling. But there will be other consequences, many warn, if it doesn’t get built. Who wins? Who loses? Among Indigenous communities, it can be folly to think of it in such stark terms.