Treasure hunters flock to Oak Island, where no one has ever found treasure

Sometimes called 'Hoax Island,' this Nova Scotia tourist trap has for centuries been rumoured to feature buried treasure. No one's ever found it, but the island's legend continues to grow. 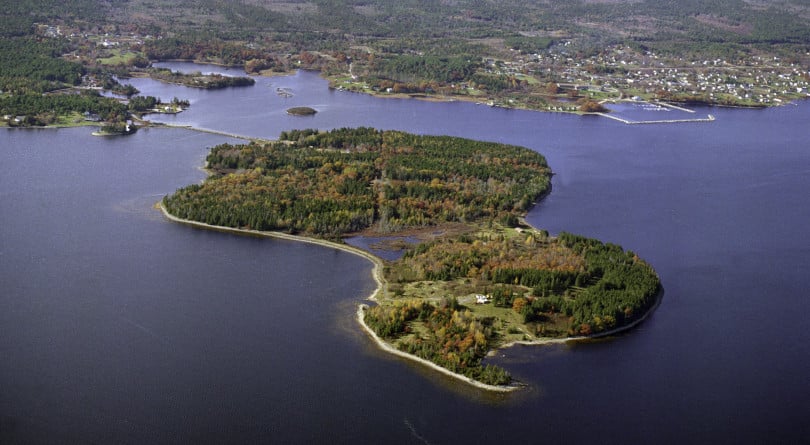 Could Oak Island be home to hidden treasure, or is it just the site of an enduring tall tale? (Len Wagg/CP)

On a recent sunny Saturday, Tony Sampson, treasure hunter, welcomed guests from Ontario, New Brunswick, Los Angeles and New York to his tour boat for a guided trip of the waters around Oak Island, entertaining them with stories of the Knights Templar, pirate gold and decades spent diving on shipwrecks around the world.

Sampson, who has a military bearing, a British accent and a well-rehearsed arsenal of sly jokes, concludes by suggesting his guests cross the causeway to visit the interpretation centre on the island. “After we ﬁnish the tour, you can go to Oak Island and get the real treasure: the baseball caps, the T-shirts and coffee mugs,” he says, winning laughs from his guests, who are enraptured with the mystery of the treasure island off Nova Scotia’s South Shore.

Sampson had 700 customers for his tour last year. This year, if the numbers hold up, he should have 3,000.

They are coming from wherever The Curse of Oak Island is broadcast. The hit reality show tells the story of two Michigan brothers who are following in the footsteps of treasure hunters who have been digging up the island for more than 200 years. After a recent marathon broadcast in Europe, Sampson (who has appeared on the show) started getting reservations from Germany. He’s already lining up a Chinese translator for next year.

READ MORE: Thunder gone under: The story of the world’s longest maritime chase

Few seem bothered by the fact that there is no reason to believe there has ever been treasure on Oak Island. Skeptics call it “Hoax Island,” because for two centuries, the obsessed and gullible—including former U.S. President Franklin Delano Roosevelt—have been persuaded by the flimsiest evidence, stories told by pseudohistorians and treasure hunters, to invest millions of dollars in digs.

Historian Dan Conlin, who wrote about the island in his 2009 book Pirates of the Atlantic and teaches a class on it at Saint Mary’s University in Halifax, is blunt. “It’s nothing beyond an interesting example of pop culture obsession and greed,” he says. “There’s nothing there beyond a natural sinkhole ﬁlled up with 200 years of junk from treasure hunting. It’s just the generations of treasure hunters who have created a self-sustaining myth that keeps going and going.”

The story begins in 1795, when a young man named Daniel McGinnis noticed an old block and tackle hanging from the branch of an oak tree, above a depression in the ground. When he and two friends started digging, they came upon coconut husks and, every 10 feet, barriers made of oak beams.

In 1804, with the help of a wealthy backer, they dug to 95 feet, where they came upon a stone covered with strange markings. When they pulled it out, the pit started to ﬁll with water, apparently the result of an ingenious trap laid by whoever buried the treasure. The markings on the stone, when translated, promised riches: “Ten feet below two million pounds lie buried.”

This series of events has been repeated in dozens of books, tantalizing generations of treasure seekers, but it does not stand up to scrutiny. The story was not written down until the 1860s, and it was spread by treasure hunters looking for investors. The inscribed stone was later lost, and nobody ever bothered to photograph it or even trace the strange markings, let alone explain how it was translated.

Historians think it’s a hoax and see echoes in the story of popular folklore from the era. At the time of the California Gold Rush, there was a mania for sudden riches. In New England and the Maritimes, it often took the form of stories about hidden pirate gold.

“Oak Island is just one tale in a long-running mania for treasure legends all along the eastern seaboard,” says Richard Joltes, a Harvard IT instructor who has been debunking Oak Island falsehoods for years. “There were all these legends of Indian gold or British gold or French gold or somebody else’s gold.”

The ﬁrst searchers to dig up the Oak Island money pit were seeking a treasure buried by pirate Captain Kidd. When researchers eventually proved that he had never been anywhere near Nova Scotia, though, the treasure seekers didn’t stop digging. They came up with new theories. The Curse of Oak Island, which comes from the same production company that produces the hit pseudohistory series Ancient Aliens, presents various outlandish theories, especially those centred on the Knights Templar, a disbanded European religious order that Dan Brown put at the heart of his best-selling thriller, The Da Vinci Code. “It’s classic pseudohistory. It’s taking archeological sites out of context, building on coincidences and speculation with no real evidence,” says Conlin.

Conlin can’t make himself watch the Oak Island show because it is so absurd. “I saw one expert they brought in holding up a railway spike … and saying, this is the keel spike of a Spanish galleon,” says Conlin.

But the lack of evidence seems not to bother viewers, and the tourists keep coming. Angela Steeves, general manager of the Oak Island Resort and Marina, a stone’s throw from the island, hopes that Chinese tourists will soon join the Europeans and Americans enjoying the excellent ﬁsh cakes in her dining room. “That changes the ball game altogether.”

Steeves doesn’t want to say whether she thinks there’s gold on Oak Island. “I hope we never ﬁnd out. I hope the mystery continues for years and years and years.”

This article appears in print in the September 2019 issue of Maclean’s magazine with the headline, “‘Hoax Island.’” Subscribe to the monthly print magazine here.