At a rally in Brampton, the Liberal leader happily draws some unlikely connections between his two chief rivals 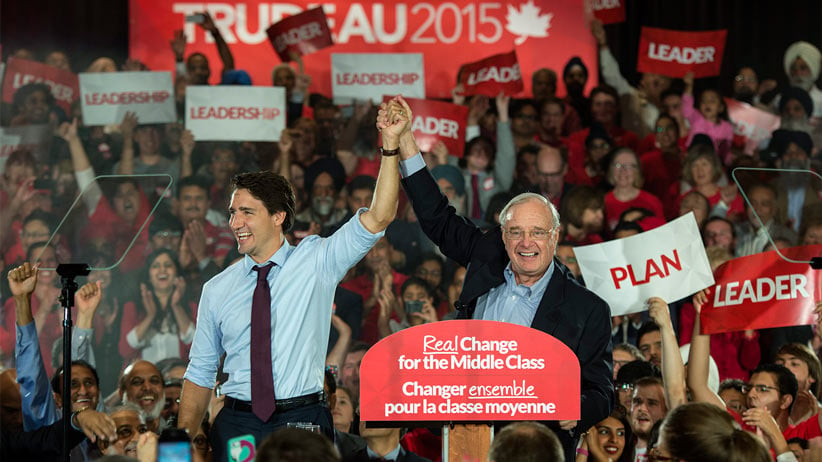 When Liberal Leader Justin Trudeau stepped inside the main room of the Embassy Grand Convention Centre, in the Toronto-area riding of Brampton East that many believe will be a tight three-way race, knocking down Prime Minister Stephen Harper wasn’t going to be enough. No. Trudeau also had to give good reasons why people should opt for his Liberals instead of the NDP. The best way to do that, it appeared, was to show how NDP Leader Thomas Mulcair and the Prime Minister align.

Finding similarities between New Democrats and Conservatives is, usually, not all that easy. However, Trudeau’s fodder came over the last 48 hours, during which Mulcair declined to take part in a debate about women’s issues—following Harper’s rejection of the same invitation—and also when the NDP leader promised, if elected, to have a balanced budget his first year in office.

On the stage, Trudeau went on the attack. “Why does [Mulcair] want to take billions of dollars of the economy in a recession? And what public investments will he be cutting to do that?” Trudeau asked of the NDP leader. “Mr. Mulcair has no answers. He confirmed that today when he signed on to Stephen Harper’s economic pulse.”

After the Liberal leader left the stage, happily engaging in handshakes and selfies with the adoring crowd, the message of comparing Mulcair with Harper rang consistent with local MP candidates.

“There’s not much of a difference between Harper and Mulcair, at this point in time,” said Azim Rizvee, a Liberal candidate in the Milton, Ont., riding, within 30 seconds of chatting with Maclean’s. “You can’t even differentiate where the Harper plan ends and Mulcair’s begins.”

Of course, that isn’t at all true.

The NDP and Conservatives have drastically different stances on crime, democratic reform, pensions, taxes, and virtually every issue on the campaign. But if Liberals are going to scare people away from voting NDP, comparing Mulcair to Harper is an obvious tactic.

That’s not to say Harper’s policies were ignored on this night. While Conservative attack ads consistently claim Trudeau is “just not ready,” Trudeau countered with the exact opposite. “We know the Conservatives,” he said. “They’re old. They’re tired. They’re out of ideas. They have no plan for the economy or how to create jobs.”

With dozens of Liberal candidates from the Greater Toronto Area on hand, Trudeau also brought along a special guest for his tour on Tuesday: former prime minister Paul Martin. As finance minister under Jean Chrétien’s Liberal government, Martin produced five consecutive surpluses, and his mere presence gave a heightened sense of credibility to the event. “This is their deficit. They created it before the 2008 recession,” Martin said of the Tories.

When a woman in the front row interrupted Martin in the middle of his talking points on the Canada Pension Plan, the former prime minster halted mid-sentence to acknowledge her discontent with the current Prime Minister, repeating her words to the masses. “This woman said that Harper has got to go,” Martin exclaimed. “Is she right?” He couldn’t help but smile at the cheers.

“I’m appalled by Harper’s record on democracy and the environment—especially climate change,” said Jan Stanley, who brought with her to the rally Trudeau’s Shadow, a collection of essays about Trudeau’s late father, Pierre Elliot Trudeau, just in case a book-signing opportunity presented itself. Her husband, Len, one of the few in attendance not wearing red, said he isn’t the kind of person who loves the constant cheering, but even he conceded he got a little revved up during Martin’s speech.