Trudeau says 'We're all getting what we want' on pipelines. He means nobody's happy.

With the Liberals sliding in the polls, Trudeau's middling stance on pipelines isn't helping 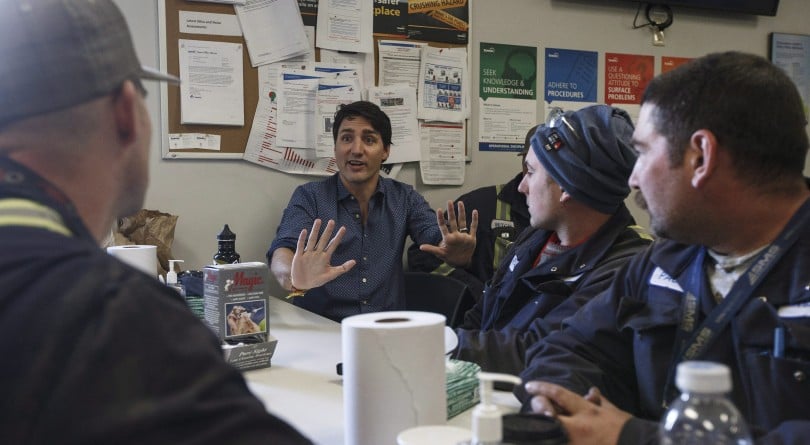 Then there’s an image with less cheery narrative value. Prime Minister in Suncor Fort Hills’ lunchroom talking carbon taxes with some workers in coveralls with name badges. Ryan, in coveralls and a toque, leans away from Trudeau with a skeptical glare. Next to him, Paul wears a serious moustache and an unimpressed facial expression. Behind the PM, Mitch stares blankly. It’s bookends nicely with a photo from the evening prior in B.C., where Trudeau held a fundraiser and a few hundred anti-pipeline activists toted umbrellas (this being Vancouver) and protest signs (ditto).  One large sign features a cartoon caricature of Trudeau in bed with executives of Kinder Morgan, the company that hopes to consummate its federal of the Trans Mountain pipeline.

Two solitudes, pro (Alberta) and con (British Columbia) tend to dominate the imagery of this debate. Yet as Trudeau spoke with media at Fort Hills, he painted a more bucolic picture of Canada’s mood. “My job as a prime minister and our job as a government is to bring everyone together and say we’re all getting what we want — in that we are moving forward to protect the environment and grow the economy at the same time, and that doesn’t have to be divisive,” he said.

We’re all getting what we want. The imagery Trudeau conjures up is roughnecks, businesspeople and coastal yoga instructors together on a hilltop, singing in unison about teaching the world to sing. The oil pipeline debate has seemed more like an epic, muddy rugby scrimmage; and the unharmonious recent news pictures in this saga have been protesters (and even a couple MPs) getting arrested at the Kinder Morgan worksite on Burnaby Mountain, where courts have granted an injunction within five metres.

Trudeau has tried to plant his flag firmly in the middle of things, shrugging off what environmentalists and the Jason Kenneys say about him picking one side or the other. The PM’s incessant message that he wants to lift both the environment and the economy has swayed neither entrenched camp. The Liberal government’s landmark decision in November 2016, to approve one Alberta-to-B.C. pipeline (Trans Mountain) and reject another (Northern Gateway) gave the factions plenty to be angry about, while they cared less for wins each group notched that day.

Trudeau maintained that the “vast majority” is in the Liberal middle on this one: content there is a jobs-friendly pipeline going ahead, as well as a national climate policy with carbon tax and the enhanced marine spill safety program, which he visited in Victoria on Thursday. Polls have shown some merit behind that belief: the Trans Mountain gets 49 per cent support nationally against 33 per cent opposition, according to an Angus Reid Institute poll in February; approval is strongest in Alberta and weakest in Quebec, and mirrors the national average in British Columbia. In that province, people who either firmly support or oppose the pipeline account for a combined 45 per cent of the populace, Abacus Data reported last month; a majority is either neutral or only lean in a particular way.

READ: Why Fort McMurray will never be the same

The problem with an everything’s-gonna-be-alright approach, however, is that it excites nobody. Trudeau won the election by going bold on marijuana, electoral reform and running deficits. A middling stance on pipelines can at best help prevent some soft Liberals, either left-leaning or right-leaning, from leaving his fold; but it won’t attract people. His party has shown ample losses of public support in recent weeks, after his embarrassing trip to India; trying to staunch the bleeding tends not be enough for victory when you’re the second-ranked party.

Unless there’s a shameless about-face on pipelines, it appears unlikely the Liberals want boldness on the pipeline issue. When an Indigenous activist at his $1,000-a-plate Vancouver fundraiser interrupted Trudeau’s speech to call him a “weak leader,” the PM first dismissively thanked him for his “generous contribution” to the Liberals. As the protester was escorted away, Trudeau bemoaned the opposition:

“Unfortunately, there are still people out there stuck in a Stephen Harper mindset. Stephen Harper and the Conservative party, but also friends* who find themselves on the opposite side of the political spectrum, still think there’s a choice to be made between the economy or the environment. That’s the old way of thinking.”

Trudeau views himself as someone who can usher in a new way of thinking. Moderate opinion mixed with apathy is not particularly new since 2015. But if Trudeau can’t successfully get that pipeline built to the west coast, or put a national carbon tax in place—and both plans remain fraught with legal challenges and protests—his troubles could grow far beyond the edges of public sentiment.

*It’s telling of the modern Liberals’ more leftward tilt that Trudeau refers to the anti-pipeline side, rather than the pro- side, as his friends.