Justin Trudeau was right to exonerate the Tsilhqot’in, who never were defeated 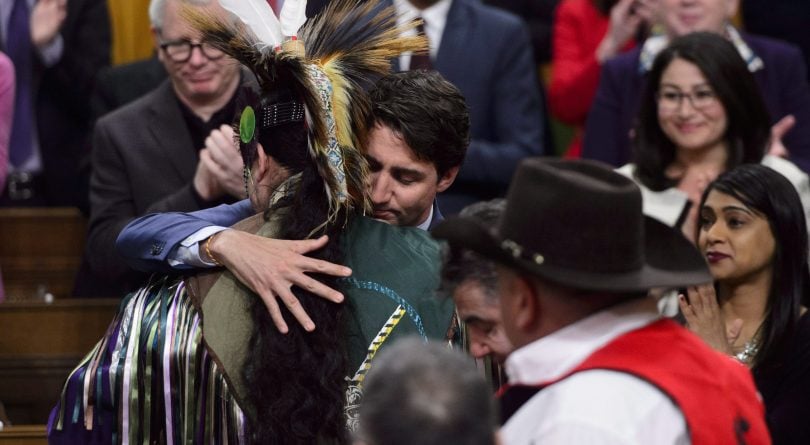 Prime Minister Justin Trudeau hugs a drummer following a performance after delivering a statement of exoneration on behalf of the Government of Canada to the Tsilhqot'in Nation and the descendants of six Tsilhqot'in Chiefs in the House of Commons on Parliament Hill in Ottawa on Monday, March 26, 2018. (THE CANADIAN PRESS/Sean Kilpatrick)

When the House of Commons united behind Prime Minister Justin Trudeau on March 26, 2018 to offer the Tsilhqot’in Nation a genuine expression of regret for a shameful betrayal that occurred 154 years ago on the banks of the Chilko River in British Columbia, a properly grave tone was taken in the speeches Trudeau and the Opposition MPs solemnly delivered.

The Tsilhqot’in were not defeated in 1864. They have not been defeated since. This is a point Tsilhqot’in elders have rightly insisted upon, and they have all the evidence in their favour to do so. There is an almost wholly forgotten moment, on the afternoon of July 17, 1864, when the Tsilhqot’in were indeed very nearly defeated. It is almost miraculous that they were not. We’ll come to that, but first, the betrayal, and Monday’s act of contrition.

A profound wrong has been righted. The full exoneration of the six Tsilhqot’in war leaders who were charged with murder and convicted and hanged following the bloodiness of 1864 was an honourable thing to do. Upholding the honour of the Crown is the first constitutional duty that Canada is obliged to discharge in its dealings with this country’s indigenous peoples. It has taken a long time, on this particular front, but we’re on a solid footing for once. It’s a good start.

Canada confirms without reservation that those war chiefs are “fully exonerated of any crime or wrongdoing,” Prime Minister Trudeau declared. The chiefs were acting according to their own laws. They were defending their territory, their people and their way of life, Trudeau said. “They acted as leaders of a proud and independent nation facing a threat from another nation.”

Tsilhqot’in Nation tribal chairman Chief Joe Alphonse said Monday’s events in the House of Commons mark a beginning. “The deceit we faced 154 years ago can never be forgotten, but we can move forward on a different path, a new journey, one carved out by a mutual understanding and respect of our rights, title, and ways of life,” Chief Alphonse said. “Today, Canada has finally acknowledged that our warriors did no wrong.”

That is also true.

The shame and disgrace at the heart of the Chilcotin War’s legacy occurred shortly after 8 a.m. on Aug. 15, 1864, when the war leader Lhats’as?in and several of his comrades agreed to enter the encampment of William Cox, the leader of an expeditionary force of several dozen armed men dispatched by the just-appointed Governor Frederick Seymour, to talk truce. Instead, Lhats’as?in and his warriors were arrested and put in chains.

Lhats’as?in and four other war leaders—Biyil, Tilaghed, Taqed and Chayses—were hanged at dawn on Oct. 26, 1864 at Quesnellemouth, on the Fraser River. The following summer, the warrior Ahan, in hopes of making peace with the Crown, turned himself in at Bella Coola on the coast, offering several hundred dollars’ worth of furs as recompense for his part in the uprising. Ahan was taken to New Westminster, sentenced to death, and hanged on July 18, 1865.

The war began in the final days of April in the Homathko Canyon, where Lhats’as?in and several of his warriors set upon a road-building crew, killing 17 men over three days. The road builders were at work on an ambitious plan financed by the speculator Alfred Waddington to establish a wagon route from Bute Inlet through the Coast mountains via the Homathko Canyon, then across the Chilcotin Plateau to the gold rush diggings in the Cariboo country.

The labourers on the project were almost entirely Chilcotin. Relations were tense for weeks, but the breaking point appears to have come when someone, almost certainly foreman William Brewster, had threatened to somehow conjure smallpox to discipline them if they didn’t do as they were told. At least half of the Western Tsilhqot’in had died in the smallpox epidemic of 1862.

Waddington was considering another, alternative route that same summer. He had contracted two men, Alexander Macdonald and William Manning, to undertake a trail-blazing exercise that would bring traffic by sea to the north of Bute lnlet, to Bentinck Arm, and from there up the Bella Coola Valley and through the Tsilhqot’in territory into the interior. On May 31, Lhats’as?in’s warriors attacked a mule train Macdonald was leading. He was killed along with his Tsilhqot’in wife and two other men as they were making their way to a rendezvous with Manning at Puntzi Lake. Several days later, Manning was killed at his Puntzi Lake outpost.

The Chilcotin War stopped the roadbuilding altogether. It began with the terror of smallpox, but they’d held the outside world at bay—which had been the point of all the bloodletting. The warriors who had refused to accompany Lhats’as?in when he entered the camp of the colonial expeditionary force fled into the hills and survived. They joined with other warriors who had managed to evade capture, and most of them ended up beyond the Taseko River in the remote southwest of the Tsilhqot’in territory. By 1916, their descendants, the Xeni gwet’in, were showing up in Indian Affairs’ department files as the Nemiah Indian band.

For more than a century after the Chilcotin War, the Nemiah Valley remained a packhorse journey of several days from Williams Lake, the nearest town of any size, 187 kilometres to the northeast. It stayed that way until the Canadian Forces punched a dirt road into the Nemiah Valley in 1973. Four years ago, the Xeni gwet’in won a groundbreaking Supreme Court of Canada decision specifically affirming their aboriginal title to their territory—a first in Canadian aboriginal rights law. This is not what defeat looks like.

To get a handle on the story of how the Tsilhqot’in nearly lost the war, several years ago I travelled a further three hours into the mountains from Nemiah over a spine-rattling backroad to meet with the Xeni gwet’in patriarch Eugene Williams, at a place called Captain George Town.

There’s no town there. It’s a narrow mountain valley with lush meadows of swamp hay sufficient to keep Williams’ herd of 40 cattle through the rough Chilcotin winters. I was taking notes for a book I was writing with a group of Xeni gwet’in researchers, and Williams had grown up on Chilcotin War stories. He’d  been born in a trapline camp on the Taseko River, 73 years before. It was said that Eugene Williams had the most accurate and complete account of how the Chilcotin War was so nearly lost.

“Samadlin,” is the way Williams began his story. Samadlin is how the notorious former Hudson’s Bay Company trader Donald Maclean was remembered by old Tsilhqot’in people. Maclean had developed a reputation among the Indigenous people of British Columbia’s interior as a cruel man, a ruthless, heartless killer.

In 1864, Maclean was hired out of retirement by Governor Seymour to lead a group of mercenaries to join up with the colonial expeditionary force commanded by William Cox, who had been instructed to carry out the capture of the Tsilhqot’in war leaders.

“Old people have a story about that one, Williams said. “They say, them old days, if he win at Eagle Lake, he win everything, eh? He’s going to get it all. Everything, I guess. But he lost. He gets killed.”

On July 17, 1864, defying the direct orders of the cautious William Cox, Maclean bolted from the main camp of the expeditionary force, near Eagle Lake, and set out to hunt the Chilcotin warriors, accompanied by a small party of mercenaries. Two Tsilhqot’in fighters whose names are lost to history—they are given variously as Hatish and Sachayel, or Anukatlk and Shililika—were watching Maclean’s every move.

On a wooded hillside not far from what was to become the cattle camp known as Captain George Town, the Tsihlqot’in fighters whittled pieces of bright wood and dropped them on a trial Maclean was ascending, knowing he would pick them up and put them to his lips to determine if they’d been recently cut. And he did just that.

Maclean was known to wear a kind of body armour, an almost medieval breastplate that covered his chest and stomach.

“I guess he’s going up a hill, eh? Kind of warm, eh? Kind of hot. So he took off his shirt, like that,” Williams told me. “Somebody heard they got steel shirts. I don’t know what kind of shirt that is. So that time he’s not wearing his shirt, I guess. . . But it was opened up, right here.” Williams pointed to his chest.

“Right here. That’s where the Indian hit him with a bullet. That’s why he killed him.”

Maclean’s mercenaries panicked and fled back to Eagle Lake to tell Cox what had happened. Cox panicked, and withdrew his section of the expeditionary force back to the main camp at Puntzi Lake.

The warriors had been growing tired and hungry. They’d been kept away from the salmon fisheries on the Chilcotin, Chilko and Taseko rivers, out of fear of coming under attack. It had to end, one way or another. Had Maclean’s death not spooked Cox into withdrawing to Puntzi Lake, the Tsilhqot’in leaders would likely have been hunted down and killed.

Even though it all ended in such an ignominios betrayal and dishonour, Lhats’as?in’s decision was the right one. Even though he and five others were hanged, the rest of the warriors evaded capture and survived. They withdrew into the mountains, and their children and grandchildren and great-grandchildren went on to fight another day, by other means

“Chilcotins, they never got beat,” the Xeni gwet’in elder Henry Solomon once told me. “Never got beat.”