Just as in 2012, the Liberals of the late ’60s needed a messiah. Enter Trudeaus. 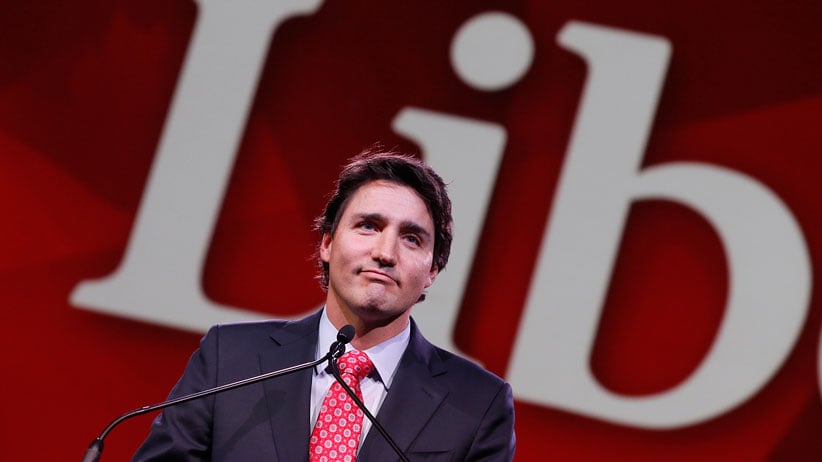 Justin Trudeau’s expected move into contention for the Liberal crown revives memories of a half-century ago, sitting around a polished table in a refurbished farmhouse near Ottawa, when I was part of a small knot of media junkies quaffing sangria and talking politics. This was in 1968, when it was his father, Pierre Elliott Trudeau, about to hurl himself into the political snakepit, who was the topic of intense speculation.

There is a disconnect between the storied political campaign of the intellectual gunslinger who put us on the map with his macho pirouettes and devil-may-care gestures, and his eldest son, whose entry owes more to boxing than thinking outside the box. One vague link occurs. The year that the senior Trudeau was crowned coincided with Ben Tre, the Vietnamese city that the Americans, then at war, had to “destroy to save it.” Unless Justin as leader applies some harsh medicine to the remnants of the Liberal party, he will end up like Ben Mulroney, hosting entertainment shows. (Already the politician, Justin invited Ben to his wedding to glamorous CTV talk show correspondent Sophie Grégoire.)

A high school teacher when he wore a cropped version of a Johnny Depp beard, Justin reached out to the country only once before, at his father’s funeral: voicing the most poignant of the elegies, ending his prayer with the heart-rending, “Je t’aime, papa.” Prayers will come in handy should he be charged with rescuing the Liberals, who haven’t been the country’s Natural Governing Party since Noah launched his ark, or so it seems. The state of the Grits in the past decade adds up to an act of supreme self-immolation. They have lost every power base they once commanded: Quebec, the Maritimes, rural Ontario and Toronto. Their record in the past four elections, as they spiralled toward political purgatory, was to lose an average of 30 seats at a time in the past four elections. The downward momentum increased in the last election, when they gave up 43 constituencies, including that of the enigmatic Michael Ignatieff, the party’s previous instant messiah. The best brain of his generation he may have been, but without any discernable focus, he became the Titanic of his party and hasn’t surfaced since.

The Liberal party inherited by Pierre in 1968 also required a messiah, because the previous PMs, John Diefenbaker and Mike Pearson, had acted like mountain goats with locked horns. It took the iconoclasm of a catalyst of Trudeau’s determination and muscular vision to break the impasse, and he remained in office for most of the next 16 years.

The necessity for a saviour was much less apparent then than it is now, when the Liberals appear to be a vanishing species not just federally, but in Quebec, British Columbia and even Ontario.

It was a dreamy interlude, back in that heady evening of the inaugural Trudeau apparition. There we were in the welcome embrace of one of those glorious central Ontario clover-laden evenings, getting deeper into the Spanish red, when a vaguely radical CBC type mentioned a book he had been reading, The Morning of the Magicians. Its theme was to wrap the visionary ideals of the 1960s in a mystical aura, which suited the mood of our gathering just fine. We were so caught up in the spirit of the occasion that no one hooted in derision when it was suggested in the self-deprecating manner of Canadian intellectuals that Trudeau must be “some kind of goddamn magician,” as one of the revellers put it. The trick would be to adapt Trudeau’s perceived perfections into the operational code of the nation’s highest office—or so we thought.

Pierre Trudeau seemed to appear on the national scene out of nowhere, like a desert prince who follows the shifting sands. In fact he was the product of a crammed, precisely plotted educational regime that included stints at Harvard, École libre des sciences politiques, the London School of Economics and the Université de Montréal—an academic immersion that didn’t end until he entered active politics at age 46, a decade later than his eldest son. If Pierre’s conquest of the Liberal party appeared in retrospect to have been predestined, it was anything but. In fact, Trudeau’s victory seemed scarcely credible, much more far-fetched than inevitable. To most Liberals, Trudeau was an untested outsider whose only distinction was the red rose in his lapel—a disturbing presence not easily encompassed by the collective Liberal mindset that assumed its destiny was simply to carry on as the nation’s Natural Governing Party.

The denizens of the Rideau Club, the luncheon venue where the power barons gathered, were fond of telling one another about the time Trudeau turned up on a Saturday morning at the Privy Council Office dressed in desert boots and a boiler suit. The commissionaire on duty, convinced Trudeau was a plumber guided by a jumbled worksheet, turned him away. In the early speculative talk about leadership candidates, he was dismissed as a bad joke. (“How could anybody who combs his hair forward, like Julius Caesar at a Stratford matinee, presume to lead the country?”) Enlightened Liberals—both of them—felt they wanted a dramatic change from the Pearson brand of poker politics, a candidate who could re-establish public trust in the party and reawaken confidence in itself.

As soon as Trudeau hinted that he might be available, historians smelling of water biscuits, lobbyists desperate for credit ratings, the usual whisky priests and progressive thinkers of every vintage began coalescing behind his candidacy. Toronto artist Mashel Teitelbaum circulated a petition urging him to run, which eventually comprised 600 big-name signatures. In a courting mood, but not committing himself, Trudeau left for a holiday in the South Pacific. “Before I make my decision,” he told me before leaving, “I’ve got to find out whether it’s really possible to do anything once I get into the prime minister’s office.” Instead, he met Maggie Sinclair in a bikini.

In every successful political campaign there is an identifiable moment when it catches fire, when natural momentum overtakes plotted positions and propels a candidate into the lead. For Pierre Trudeau, that moment arrived on Jan. 28, 1968, at the Quebec Liberal Federation meeting held in Montreal’s Hotel Bonaventure. Jean Marchand, as the Liberals’ Quebec lieutenant, had craftily made sure that none of the candidates would be allowed to address the federation, even though Quebec would be sending 626 delegates to the leadership convention. Since he was not yet a candidate, Trudeau could appropriately deliver the conference’s keynote address. Using a screen that listed all of Quebec’s options (from separation to absolute monarchy) in crystal-clear prose, Trudeau demonstrated why federalism would ensure the province the most attractive destiny. At the end of Trudeau’s speech, they cheered and sang Il a gagné ses épaulettes. When one enthusiast yelled out, “THE NEXT PRIME MINISTER!” Trudeau bowed his head, shrugged, waved his hands in self-deprecating gestures, shrugged again, and sat down. Whatever doubts had existed among his followers about the willingness of Quebec delegates to support his leadership had vanished.

Their confidence was confirmed when Claude Frenette defeated Yves Paré, an old-guard candidate, by a four-to-one margin in the key vote for the presidency of the Quebec Liberal Federation. That evening Trudeau walked into Frenette’s hotel room, hugged him and said, “We beat the bastards. Now it’s possible for us to do things.” At the annual meeting of the Ontario Liberals in Toronto that followed, Trudeau’s delegate assault was organized by Robert Stanbury, Tim Reid and Charles Caccia. He was carried through the meeting hall on delegates’ shoulders and, for the first time, there was evidence of Trudeaumania, the spectacle of teenyboppers in miniskirts squealing at the sight of him. Their reaction was best described by Elmer Sopha, a playful Ontario MPP, who reported, “Their eyes are transfixed and they seem to be breathing through their toenails. You’d think they all had asthma.”

On Feb. 14, 1968, Trudeau finally announced his official entry in the race at an Ottawa press conference, accusing the media of creating his candidacy as a joke on the Liberals: “When I saw the response from political people, from members of the party and responsible members of Parliament, this is when I began to wonder if this whole thing was not a bit more serious than you and I had intended. It looks a bit like when I tried to enter the party. I didn’t think the Liberal party would take me and suddenly, they did. So I was stuck with it. Well, now you’re stuck with me.” Almost immediately, the contest became Trudeau against all the others. Riding a chartered jet, huddled inside the folds of his leather coat, Trudeau travelled 32,000 km, making 30 pit stops. Every appearance ignited standing ovations. Few recall the cliffhanger final score: he won the leadership with merely 51.1 per cent of the votes on the fourth ballot.

The general election that followed was a combination of coronation and Beatles tour. The same teenyboppers with manes of streaming hair gripped their machine-autographed photos of Pierre-baby and screamed whenever he deigned to hug one of their swarming numbers. Bemused toddlers borne on their parents’ shoulders were admonished to “remember him,” as excitement surged across the country. Press cameras clicked like hungry insects.

This also marked the inauguration of the dance of the klieg lights that was most directly responsible for Trudeau’s victory. There were eight serious candidates, forcing the television producers to narrow their coverage. To a man, and they still were all men, they assumed a Trudeau victory long before the delegates or the contender himself made that freefall leap of logic. Everywhere that Trudeau went he was followed by lights that bathed him in luminescence that turned into a secular halo. The more he appeared on the small screens, the more entranced Canadians were by his devil-may-care style and cool demeanour. There was about him a subtle, indefinable intensity, a suggestion of pent-up power and hidden dimensions—the identical feeling that had fuelled our bacchanalian evening at that Ottawa farmhouse.

The cameras love Justin too, but this is a different age, more accustomed to politicians playing to media. Still, the ability to hold a crowd in thrall is a rare thing, and Justin’s charm of mixing sex appeal with political ideals will take him a long way. Justin enters the race with two secret weapons: 150,000 avid Twitter followers, with the bonus that under the Grits’ revised constitution almost anyone can vote; and the campaign guidance of Gerald Butts, one of the wisest political advisers extant.

The two Trudeaus share not only a famous surname. There is an essential Pierre characteristic that I have noticed emerging in Justin, as I have watched him blossom into manhood. No matter what he did, in office or out, Pierre never failed to exercise his ultimate civil liberty: the right to be himself. Justin is cast in precisely the identical mould. As heir to that magnificent tradition, he will try to repeat history and reach for the top. Anything can happen—just watch him.

Peter C. Newman covered the national political scene for Maclean’s and has written half a dozen political bestsellers.