The hockey commentator made bigoted remarks on national television. What else is new? Here's what Canadians had to say. 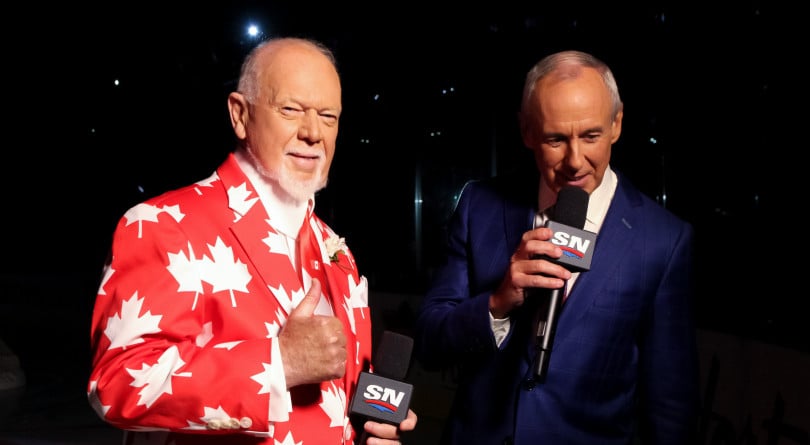 Don Cherry is known for his loud suits and even louder mouth. A few days before Remembrance Day, the 85-year-old hockey commentator ranted during Coach’s Corner that “you people”—referring to immigrants in Canada— who “love our way of life” should at least pay to purchase a poppy “or something like that.”

His comments were widely denounced. Sportsnet, the NHL and Cherry’s co-host Ron MacLean apologized for his remarks, while Cherry himself has not.

Justin Trudeau didn’t issue a statement in response but his account did retweet his defence minister Harjit Sajjan on the topic. Conservative leader Andrew Scheer hasn’t publicly responded to the controversy. See the clip below as well as the apologies from Sportsnet, NHL and MacLean. We’ve compiled a collection of responses from Canadians to Cherry’s remarks.

“You people… love our way of life, love our milk and honey. At least you could pay a couple of bucks for poppies or something like that. These guys paid for your way of life that you enjoy in Canada.”

Ron MacLean nodded and gave a thumbs up. pic.twitter.com/OXnIwV1n9T

I have worked with Don for 30 years, and we both love hockey. But last night, I know we failed you. I see hockey as part of what unites us. I have the honour of travelling across our country to celebrate Canada's game, and our diversity is one of our country's greatest strengths.

Don, let me introduce you to “#youpeople”

My great grandfather, Hira Singh, who served in WW1 & WW2 under the British.

We honour all who served. #RemembranceSunday pic.twitter.com/pNeBlJMC4R

Last night, Don Cherry made comments that are wrong in describing Canadians' remembrance of our veterans. His remarks don't recognize the contribution of Canada's diverse communities. I hope we can turn this into a moment where we can learn about about all who have served. 1/7

Seven decades later, I am able to take my seat in the House of Commons and serve my country. Mr. Cherry: my grandfather's story is not unique. I trust you are a big enough man to apologize for your comments.

On Remembrance Day I will wear a poppy on our Raptors-Clippers broadcast from LA. It is a symbolic reminder we ALL need of sacrifices made by many so we ALL can live in a place ALL are valued. As a colleague & Canadian, there is no such thing as 'you people.' There is only 'us'. https://t.co/VG0mvXStNn

Ok, I’ve read a lot of the Don Cherry stuff, and there’s one thing people are missing. It is that for many people of colour, feeling fully Canadian can sometimes be an elusive goal. Hockey is one of the best gateways to reach that goal. Here is why what Cherry said is hurtful.

But all it takes is “you people” for those incremental gains to be wiped away, completely overwhelmed and erased by two small words that mean so much, that are so malicious. Two words on our “national” hockey broadcast, and you’re right back at zero.

Don Cherry is way off base to question the devotion of newer Canadians to the very same veterans and the sacrifices we will honour tomorrow on Remembrance Day. His comments are unfair and just plain wrong.

It is time for Don Cherry to be fired.
His comments crossed the line big time but he’s not relevant anymore either.
I was at a birthday party with my kid’s hockey team a couple years ago and there was a Don Cherry impersonator there. None of the kids knew who he was.

Canadian soldiers of No. 2 Construction Battalion in WWI.

Private Buckam Singh was born in India, came to Canada in 1907, and enlisted in the CEF in 1915. He was treated at LCol John McCrae's hospital.#LestWeForget