We have the capacity to welcome many more refugees to Canada than our leaders are pledging. What’s lacking is the political will. 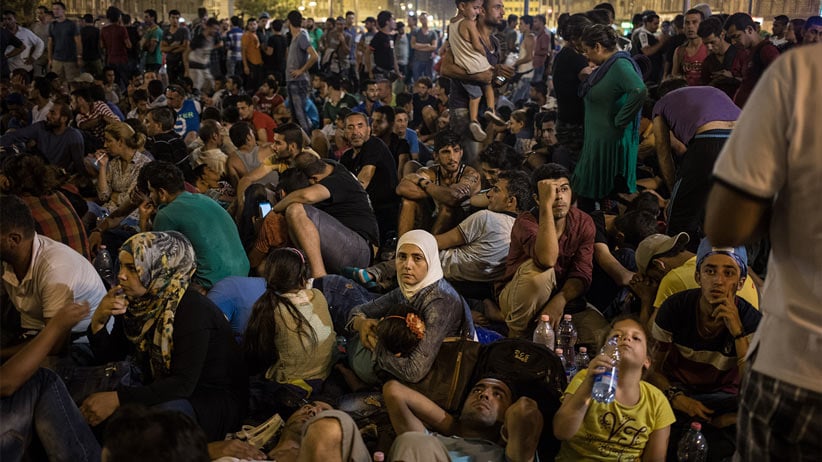 Migrants gather in front of Keleti station in central Budapest on September 1, 2015 in Budapest, Hungary. The station was closed today and was said to be an attempt by the Hungarian government to uphold EU law and restore order after recent choatic scenes at the station. (Matt Cardy/Getty Images)

“Our country has the most generous immigration and refugee system in the world. We admit, per capita, more people than any other.” Any time Prime Minister Stephen Harper or his ministers are asked about the refugee crisis, they repeat this claim. But, no matter how you twist, spin or stretch those sentences, they remain false.

If measured by migrants (i.e., all new arrivals) per year, per capita, Canada is ranked 24th in the world. If you use the number of arriving immigrants, we are eighth. If you compare immigrants as a proportion of the national population, we are around 49th. These numbers are pretty good, but there is no way you could mistake us for being the most generous.

And refugees? If we consider the total number of refugees hosted, last year, Canada was closer to 20th. Refugees hosted per capita? Not even in the top 30. How about refugees accepted annually? We approved 23,286 last year, which ranks us 15th. At the same time, Germany took seven times more. This year, they will accept at least 35 times as many. Denmark took more than we did, and they have one-seventh the population.

What about just asylum-seekers? Last year, Canada accepted 13,500 asylum claims. Russia accepted 275,000. There is no way you can interpret what Harper says to be anything other than untrue.

I could go off about how contemptible it is for the Prime Minister to repeat a fundamental falsehood about our response to one of the most pressing international crises of this generation. (Disclosure: I’ve been a member of the Conservative party in the recent past, and I am married to a Liberal party candidate. You can read a full disclosure on my LinkedIn page.) I could talk about how little respect this shows the public, and how low our expectations have fallen that we are not shocked at this. But this isn’t only Harper’s leadership failure. The three major federal parties are only offering modest short-term targets. The public, municipal governments and provinces are all proposing higher numbers. But even their expectations are too low. Far more is needed. We have done far more in the past, and we can do far more now. Canada can easily increase its refugee intake to 200,000 over the next 12 months. All it takes is political will.

The United Nations believes the total number of displaced people globally has surpassed 60 million people. German Chancellor Angela Merkel has described the ongoing refugee crisis as a challenge of historic significance. European leaders are convening emergency meetings to develop a common response. But, in Canada, our federal political leaders can’t even agree to meet and discuss it. One gets the impression that Harper, Liberal Leader Justin Trudeau and NDP Leader Thomas Mulcair are hoping the issue is going to fade away. It won’t. This week, several sources confirmed that Russian troops are now on the ground in Syria, supporting the regime of Bashar al-Assad. The situation in the Middle East is going to get worse before it gets better.

So what is being proposed? The Conservative party has promised an additional 20,000 Syrian and Iraqi refugees over four years, on top of the now-filled 2013 pledge of 1,300 Syrians. The NDP are promising to resettle 10,000 government-sponsored Syrian refugees by the end of 2015, and another 9,000 for each of the next four years. And the Liberals have pledged on the campaign to immediately resettle 25,000 refugees from Syria.

Far more is needed. The refugees crossing the Mediterranean into Europe are only a small fraction of the total in need. There are more than 1.5 million in Turkey who will shortly be facing winter conditions. Lebanon is growing increasingly unstable, as it shelters 344 refugees per 1,000 people, a per capita rate 80 times greater than Canada’s. For years, northern Pakistan has been home to 1.5 million Afghan refugees, who live mainly in extreme conditions of abject poverty. Even in this hemisphere, there are six million internally displaced in Colombia. These numbers continue to grow relentlessly, as they have for more than a decade.

Related: Why we should take 20 times as many refugees

We have done far more in the past. What we are offering to do now is paltry in comparison to earlier refugee crises. In 1956, Canada took in 37,000 Hungarian refugees after the Soviets invaded. In 1979, following the exodus of boat people from Vietnam, Canada accepted 60,000 refugees over an 18-month period. In 1999, 5,000 Kosovo refugees were resettled within a few weeks.

We can do far more now. The current proposals fall well short of our current capacity, logistically, financially or socially. In the last few days, many former civil servants have come forward to point out that Citizenship and Immigration Canada already has contingency plans to accept far more refugees than what is being proposed. The price of doing more is also well within our means. It costs approximately $11,000 in social services to settle a refugee in Canada. At the current rate, we are spending one-tenth of one per cent of the federal budget on resettling refugees. As each party cravenly carves out its own special-interest tax credits and subsidies, it would be extremely easy to find money to address this crisis.

So why don’t the political leaders step up? Perhaps they’re worried about the voters who think we’ve done enough already. The latter appear to be in the minority, but they exist. Much of their opposition is explicitly due to Islamophobia, a fear that letting in Syrians will mean a mosque on every corner. Right now, three per cent of the population is Muslim. The Liberal proposal would increase that by less than one-tenth of one per cent. Not exactly a flood.

First, the federal leaders should talk and agree that the issue is too pressing to be settled after the election, or to be held hostage by partisan politics. Sadly, this step is the hardest.

Second, the government should launch the Emergency Refugee Contingency Plan. This would set in motion a chain of events that includes activating the existing refugee reception centres, mobilizing Canadian military bases to assist in immediate relocation, and sending officials overseas, right to the refugee camps, to begin to identify and screen potential candidates for relocation to Canada.

Third, federal officials should coordinate with the mayors and premiers, who are already pledging to increase the number of refugees in their jurisdictions. Those cities or provinces who that have not yet spoken up should be asked if they will participate.

Related: Our primer on refugees, one of the campaign’s big issues

Fourth, directly engage not only the United Nations, but also the governments of Turkey, Lebanon and the EU. In some cases, local governments (notably, Turkey’s) are preventing the registration of asylum-seekers with the UN, which is hindering the ability of countries such as Canada to increase their intake.

Fifth, immediately process Syrians in Europe who have family ties to Canada. This could be done in as quickly as three days with ministerial assistance.

Finally, the government of Canada and all the major political parties should directly ask Canadians to help by not only sponsoring refugees, but by donating to the cause. Increasing our refugee intake to 200,000 would cost $2.2 billion (or $63 per Canadian). As we were following the 2004 tsunami, the public should be challenged to donate, with each dollar being matched by the government.

If we accepted 200,000 refugees, we would still not have “the most generous immigration and refugee system in the world.” But it would be a significant step forward, and one the rest of the world would notice. But, more important, above all else, it would be the right thing to do.