What are babies doing behind bars in Canada? 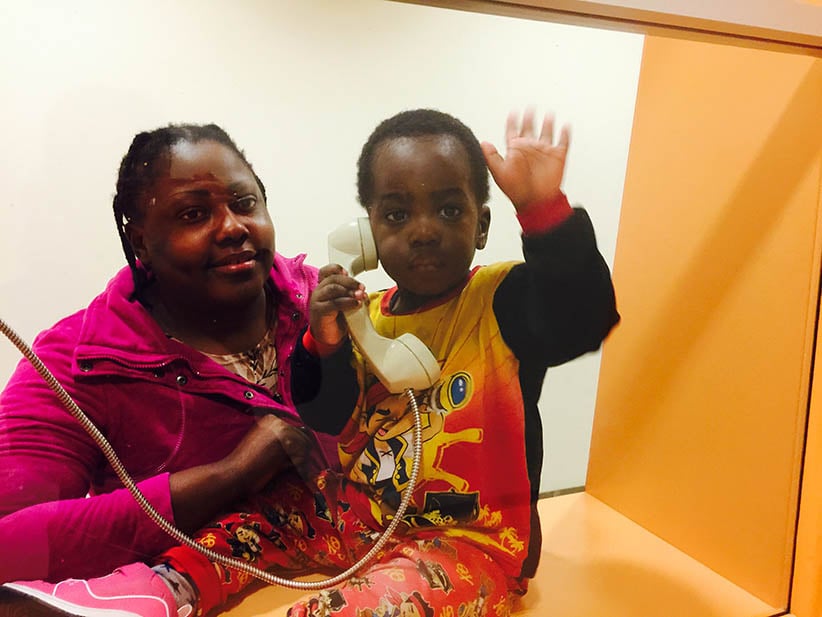 Like most toddlers, Alpha Anawa likes toys, cereal, and making new friends. Curious and bright-eyed, the two-year-old has never been to a beach, ridden on a merry-go-round, or been out of his mother’s sight. The first time he saw a car, he was petrified. The only life he has ever known has been spent behind barbed wire.

His mother, Glory Anawa, has lived in Toronto’s Immigration Holding Centre since 2013, after Glory—who was three months pregnant and says she was fleeing the threat of female circumcision in her village in Cameroon—landed at Pearson International Airport and tried to claim refugee status. (Prior to that, Glory says she had received temporary status in Finland, but wasn’t able to make it permanent.) She had identification, but it was not issued by the Cameroonian government, so she was detained after the Canada Border Services Agency (CBSA) could not verify her name, birthdate or place of birth.

Glory delivered the baby in a Toronto-area hospital and named him after the first letter in the Greek alphabet; to her, he represented a fresh start in life. The baby’s first words were “radio check”—this is what guards say when they change shifts in the converted hotel that Alpha calls home. It crushed her. “I cried for days after he said that. It’s not words for babies,” she says on a phone in the visitors’ room at the centre, Alpha squirming in her lap. The child paws at the Plexiglas, trying to reach a cellphone—a new and enticing object—on the other side.

A new study from researchers at McGill University in Montreal and Toronto’s Centre for Addiction and Mental Health (CAMH) shows that living in detention centres, even for a short time, is detrimental to the mental health of minors. Though a few people from non-proﬁt organizations, including health care workers, go in and out of Canada’s three detention centres, many are forbidden by CBSA to speak publicly about their work. This is the first time researchers have been granted access to children in detention.

After interviewing 20 families in the Laval and Toronto immigration holding centres (the third is in Vancouver), including follow-ups with several who were released, study author Rachel Kronick says she saw “troubling evidence that children developed depressive symptoms in detention, anxiety symptoms, including post-traumatic stress disorder.” The CAMH researcher, who specializes in child and adolescent psychiatry, also saw cases of selective mutism, where children stopped talking due to trauma and fear. One 11-year-old girl, interviewed in the detention centre where she lived for three months, “spent all day on the couch, crying, unable to sleep, was highly anxious and wouldn’t eat. This had previously been a healthy and happy girl,” says Kronick, whose study was published last month in the American Journal of Orthopsychiatry (the study of the prevention and treatment of behaviourial disorders). “And when many children left detention, they would continue to have such symptoms.”

After two years and more than 30 detention-review hearings, the CBSA won’t release Glory because they fear she would disappear, as have scores of other undocumented migrants. (Estimates range from 35,000 to more than 250,000 in the Greater Toronto Area alone.) Without identification, the border services agency can’t send Glory back to Finland nor Cameroon.

Although Glory is stuck in limbo, as a Canadian citizen, Alpha can leave any time. His mother would have to give him to child-protection services, because she has no one to look after him on the outside. And she will not let him go.

Alpha may hold the record for the longest time a child has lived in an immigration detention centre in Canada, although CBSA could not confirm if this was the case. Under Canada’s Immigration and Refugee Protection Act, CBSA officials can detain: asylum-seekers and Canadian permanent residents who are believed to be a threat to public safety; those they feel are at risk of skipping their hearings; and people whose identity is uncertain. There is no cap on how long someone can remain in detention, but a detention review hearing must be held within 48 hours and, if the detention is to continue, review hearings must be held every 30 days.

Most, if not all, countries that attract asylum-seekers have a detention regime, says Renu Mandhane, director of the international human rights program at the University of Toronto’s law faculty. “But that regime needs to be provided by law, and it needs to be clear as to the reasons for detention and how long,” she says. “When you have children being detained, being born in detention, being detained with their parents for months and years, that in itself is illustrative of a broken system.”

If the government is unable to deport an asylum-seeker in a timely way, she says the alternative should be to manage him or her in the community. “We can’t treat people who are undocumented or don’t have regular status as if they have committed a crime, because they haven’t.”

Eight-year-old Mojisola was in class at a Toronto school in February when her mother, Adjo, says she was apprehended by the CBSA after her refugee claim was denied. The girl went straight from Grade 3 to the detention centre, where she and her mom have lived ever since. Adjo, who does not want to use her full name or her daughter’s given first name, says she fled to Canada in 1999 from Ghana to escape abuse from her parents, who practised voodoo. She had Mojisola in a Toronto hospital, and lived alone with her daughter in an apartment. Mojisola now gets a few hours of school a week with two other teenagers living in the centre. “I miss gym class and reading the most. And my friends and teachers,” she says in an interview during visiting hours. “I feel confused, because I don’t understand anything here; I keep on having bad dreams that I will stay here forever. It makes me sad.” Like Glory, Adjo has no status, but she refuses to leave the country because she says her life would be in danger if she returned to Ghana. Adjo says she is being held because of questions about her identity. CBSA will not comment on individual cases. A source who has seen her recently says she may be deported soon.

Canada is a party to the UN Convention on the Rights of the Child, which says children should be detained only as a last resort. From 2005 to March of this year, 4,392 minors lived in detention; recent statistics show 62,175 asylum-seekers were detained in Canada between 2005 and 2011.

Immigration experts say the number of children behind bars might be double or even triple those numbers, because CBSA does not always count those detained with their parents, or those, like Alpha, who were born here.

Kronick’s study argues that the Canadian government should stop detaining children and their parents because of the psychological suffering, not to mention the distress, that could hinder their ability to integrate into Canadian society. “It was quite striking in our interviews how [detention] changed people’s perception of Canada. They imagined it was a benevolent society where they would be treated humanely,” Kronick says. “They told us they were fleeing a country considered uncivilized, and that the treatment here in Canada is barbaric, that this is not civil to be doing to children.”

CBSA said in an email that it is “not the practice of CBSA to comment on third-party studies,” and that, when it comes to legally detained minors, “the best interests of the child are always taken into account.”

Life in immigration centres, much like low-security jails, is highly regimented. The accommodations are basic and clean, but there are no activities or social services, and detainees are let outside for about an hour a day. Kronick describes constant supervision by guards and security cameras. In one centre, a mother and her 12-year-old son had to share a cot for almost a year due to overcrowding. Sometimes children wait weeks to go outside, because they needed donations of winter clothing. Fathers are separated from mothers and children; if a male child is under 18, he can stay in the family section.

For Alpha, strict mealtimes mean he doesn’t always eat when he’s hungry. And he rarely gets a good night’s sleep. Noise from the hall keeps him awake, since the bedroom door must remain open at all times, and random room searches often interrupt naps. Glory cannot leave Alpha alone—the guards are forbidden to help watch him and there is no child care—so she must take him everywhere: the shower, the bathroom, her immigration hearings. It’s getting more difficult, now that he’s started walking and running and has pent-up energy from spending most of his time indoors watching TV. The hardest part of his life right now, says Glory, is when he says goodbye to children who get released. “I can’t read his mind,” she says, “but he must think he’s doing something wrong for them to leave him.”

Kronick’s research finds that, while living in detention is harmful for the psychological well-being of children, parents should not be detained without their children, for the same reason. She points to the U.K. and Sweden, where there are alternatives. In 2010, the U.K. government decided that families and children seeking asylum can be detained for a maximum of 24 hours before they are referred to social services, which must find them temporary housing. In Sweden, asylum-seeking families with children are usually released within six days to a caseworker, who finds them somewhere to live pending their claims.

At Glory’s 31st detention hearing, Alpha is as rambunctious as ever, squealing throughout the proceedings. It is hard for Glory to focus on what the lawyers and adjudicator are saying, so she tries to quiet him. A Toronto non-profit group has offered to take her and Alpha into their shelter while the government tries to verify her identity, but the adjudicator turns them down.

At the end of yet another unsuccessful hearing, Glory’s lawyer, Swathi Sekhar, lets out a sigh. In the two years she’s been practising immigration law, Sekhar hasn’t seen a case like Glory’s. “My biggest worry is that [Alpha] will still be here by the time he has to start kindergarten,” says Sekhar. “I have to find a way to get them out before then.”