After Justin Trudeau's glowing eulogy for Fidel Castro, a look at how former Canadian Prime Ministers reacted when world leaders passed away 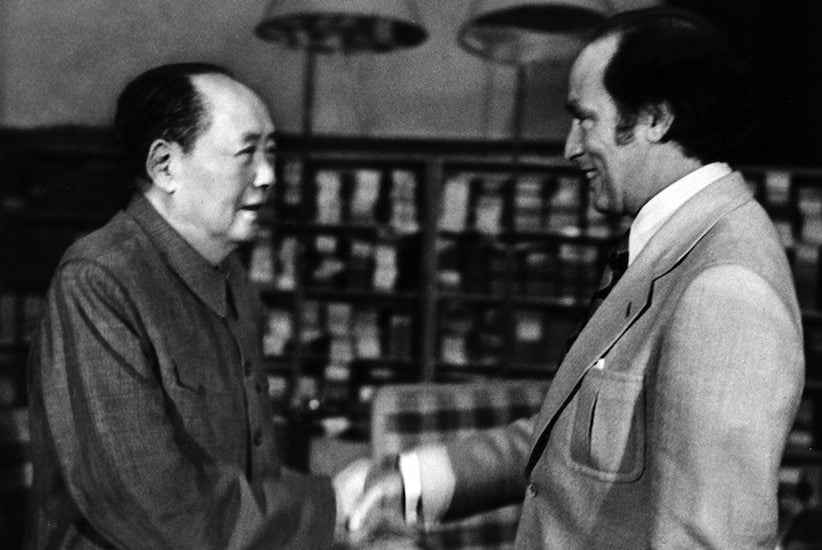 After Cuba’s former president Fidel Castro died, Canadian Prime Minister Justin Trudeau’s description of him as “a larger than life leader who served his people for almost half a century” drew sharp criticism. Here’s what former Canadian prime ministers said on the deaths of world leaders and other prominent figures.

2. Pearson on Winston Churchill (d. Jan. 24, 1965): “Despite the inevitability of this day, despite the fullness and sweep of his 90 years, no one who lived through the ’40s—when his voice inspired free men to their greatest victory— will learn without the deepest sorrow that the end of the road has been reached by the dominant personality of our century.”

3. Pierre Trudeau on Mao Zedong (d. Sept. 9, 1976): “Though our social and political systems differ, Canadians recognize the path-breaking spirit of community that, under Chairman Mao’s guidance, has contributed to the modernization of China.”

4. Brian Mulroney on Indira Gandhi (d. Oct. 31 1984): “Mrs. Gandhi was prime minister of the world’s largest democracy—a country extremely difficult to govern—and she showed strength and courage in many cases . . . She was someone who always exhibited understand- ing and friendship for Canada and so we have lost a friend, and democracy has lost a staunch ally, although she had her own difficulties from time to time.’’

5. Mulroney on Rajiv Gandhi (d. May 21, 1991): “When they came back to say there was a message for me coming in, I said to Mila, ‘I bet you it’s about Rajiv.’ I don’t know why I said that. I just was so fearful for his life ever since what happened to his mother. I’m absolutely shocked; clearly he was on his way to a victory in India.”

6. Jean Chrétien on Mother Teresa (d. Sept. 5, 1997): “Her dedication and courage earned her praise from the mighty and the famous, but it was service to the weak and nameless that gave meaning to her life and for which she will always be remembered.”

7. Chrétien on Fafez al-Assad (d. June 10, 2000): “President Assad was, to a great extent, the architect of modern Syria. During our discussions, I was struck by his commitment to the search for a just, durable and comprehensive peace in the Middle East.”

8. Paul Martin on Yasser Arafat (d. Nov. 11, 2004): “Chairman Arafat personified the Palestinian people’s struggle to see their right to self-determination realized. Canada calls on Palestinians, and all peoples of the Middle East, to reflect on the tremendous cost of conflict, and, building on the legacy of their leaders and the guidance of their governments, to renew their commitment to peace.”

9. Stephen Harper on Margaret Thatcher (d. April 8, 2013): “With the passing of Baroness Thatcher, the world has lost a giant among leaders. While many in positions of power are defined by the times in which they govern, Margaret Thatcher had that rarest of abilities to herself personify and define the age in which she served.”

10. Harper on Hugo Chávez (d. died in March 5, 201): “At this key juncture, I hope the people of Venezuela can now build for themselves a better, brighter future based on the principles of freedom, democracy, the rule of law and respect for human rights.”