What exactly did St. John's do with all that snow?

Remember the record-breaking storm that left the city buried? Officials knew they'd run out of space to put the snow they were frantically clearing away. Here's what they did with it. 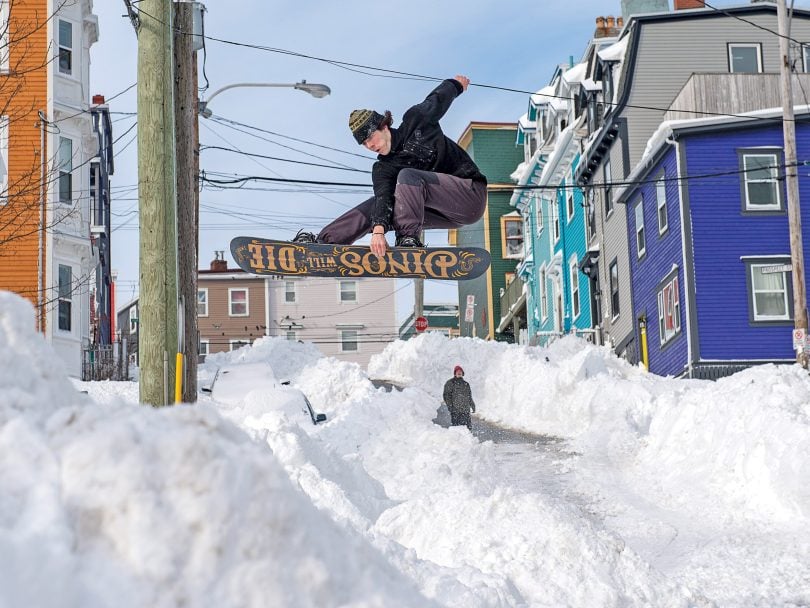 A snowboarder takes advantage of prime conditions in St. John’s during the snowstorm in late January (Andrew Vaughan/CP)

The first of three C-130 Hercules aircraft pulled to a stop on the tarmac of an otherwise deserted St. John’s International Airport in the early evening of Jan. 19. It was day three of a state of emergency, after a paralyzing snowstorm encased eastern Newfoundland in a record-breaking 76 cm of snow in a single day. Inside the aircraft were 80 artillery soldiers from CFB Gagetown, N.B., snowshoes tucked in their packs. The Armed Forces members were a small part of the solution to a mammoth logistical challenge that even an island known for epic snowstorms had never before faced.

Lt.-Col. Paul Williams, the commanding officer of the military’s immediate response unit for Atlantic Canada, stepped off the plane into 30-knot winds, a blizzard and what appeared to be an endless Arctic tundra. He was gobsmacked. “In my head, I was trying to figure out how do you clear this amount of snow? I had never seen embankments quite so high.”

Canada is a nation replete with storm tales, but #snowmageddon2020—as Twitter aptly dubbed it—is already in a class by itself. A back-of-envelope calculation—based on information provided by the City of St. John’s on the amount of road that needed to be cleared, the amount of snow that fell and the rough width of a two-lane road—suggests at least eight million cubic metres blanketed the city’s distinctive winding streets. The snowfall buried houses and cars, and caused an avalanche in the city’s scenic Battery area. Social media buzzed with photos of fully blocked doorways, and of snowboarders catching air on a street-turned-half-pipe. Oceans away, the storm made headlines—and even affected weather systems. According to the Times of London, the outflow of air from the so-called “weather bomb” caused the highest atmospheric pressure over the British capital recorded since 1882.

READ: Why do adults in Ottawa wear snow pants on the bus?

There was so much snow that plows in St. John’s couldn’t get through it. Hundreds of contractors rumbled in with dump trucks, snow blowers, front-end loaders and backhoes. “We’re basically using every piece of equipment we can find in the city,” said Mayor Danny Breen, adding that staff were working 12-hour shifts. “It’s a major task.”

The city needed the big guns: additional loader-mounted snow blowers. They reached out to borrow from other municipalities and at least a dozen arrived via tractor-trailer and ship.

First they cleared access to the hospital, and then the main roads. Snow blowers crawled through the city jetting thousands of tonnes onto already towering snowbanks or into the boxes of convoys of lime-coloured dump trucks.

By this time, the snowbanks were so high that Newfoundland Power was warning children to stay away from ones near the power lines.

Still, the city knew it would run out of space to put the snow, and turned to the federal government for permission to do what it had done for decades before the practice was deemed environmentally hazardous: dump it in the ocean. With that, trucks paraded to the harbour’s edge, whooshing one titanic-sized pile after another into the Atlantic.

READ: An ode to the snow day

At 5 a.m. on Sunday, two days after the blizzard started, Wayne Parrell stepped out into the snow trench that was his driveway. Fortified on three cups of coffee, each with two sugars, the 58-year-old snow removal contractor climbed into the seat of his front-end loader. “I’ve been snow clearing since I was 12 years old and I’ve never seen anything like this,” said Parrell, who took over the family business from his father. “Nothing compares. The amount that dropped down in one shot is unbelievable.”

That day, Parrell cleared roads and pushed and piled snow into five-metre mini-mountains near a provincial highway between St. John’s and the town of Torbay. Exhausted from shovelling for nine hours the previous day, he was frustrated to find all the shops closed due to the state of emergency. There was nowhere to get a pack of smokes, a Pepsi or a sandwich, he lamented.

The soldiers, meanwhile, also hit the ground shovelling. Two hundred in total from CFB Gagetown, along with 200 reservists from Newfoundland, helped scoop out hundreds of residents trapped inside their homes.

And Parrell, after nearly 20 hours on the job, finally took off his boots at 11:30 p.m. that Sunday. Most of the roads still only had one clear lane, but he felt he’d at least carved out a small space for reprieve. He downed one more cup of coffee before bed—this one with a shot of Baileys Irish Cream—and went straight to sleep. “I had enough of it,” he said. “My back is shot. It was way too much.”

This article appears in print in the March 2020 issue of Maclean’s magazine with the headline, “Thar she snows.” Subscribe to the monthly print magazine here.