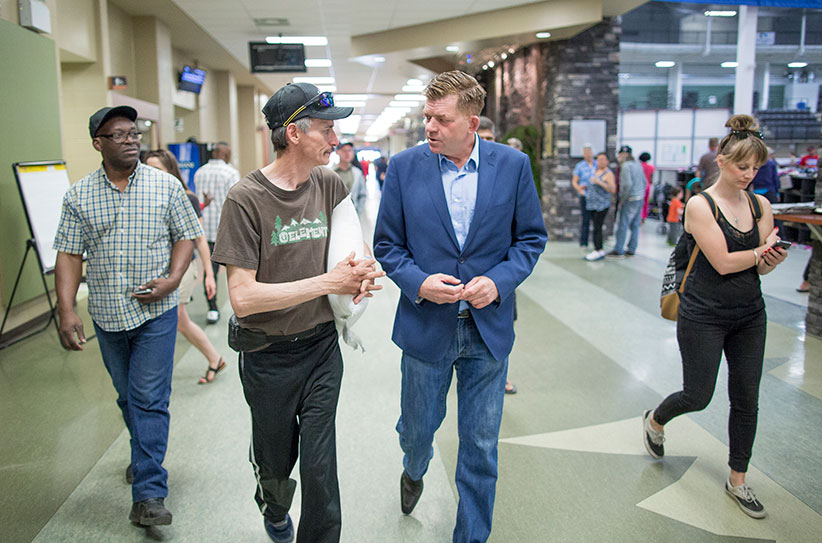 Brian Jean, Leader of the Wildrose, the Official Opposition and MLA for Fort McMurray-Conklin talks with an evacuee at the Bolt centre in Lac Le Biche. AB on Saturday, May 08, 2016. (Photograph by Chris Bolin)

The only time I visited Fort McMurray, just over 10 years ago, a federal election campaign was under way and, as usual, no leader from any party was setting foot in the oil sands boom town north of Edmonton. I rode a contrarian streak to Fort Mac and discovered a city straining under rapid change. “DRIVERS EARN AN AVERAGE $180 A NIGHT,” a mobile sign outside a video rental shop said. The owner of the local Quizno’s told me he had to close at least one day a week: members of his sandwich-making crew would quit for better-paying jobs with no notice.

How quaint those growing pains seem now. The owner of the Quizno’s was Brian Jean, then an incumbent Conservative MP, whose family’s net worth had increased tenfold in a decade. These days Jean is the leader of Alberta’s Wildrose opposition party. Last week his house burned to the ground, along with hundreds of others, as a ferocious wildfire swept across Fort Mac like an angry deity. The latest issue of Maclean’s tells the story of that fire and the heroic society-wide effort to spare the lives it endangered and heal the wounds it inflicted. Perhaps it is not too soon to say some obvious things.

First, if this fire had hit somewhere else it would have been less of a story. Fort Mac is at the centre of unresolved tensions in Confederation, which is precisely why politicians are so often eager to give it a wide berth. (Often, not always: Justin Trudeau went door-knocking in the riding three times in 2014, in a failed attempt to secure a surprise Liberal victory in a by-election.) The oil sands represent hundreds of billions of dollars in potential wealth, even at current prices. Half the local population moved to Fort McMurray from the Atlantic provinces to get a piece of that bonanza. For years, housing and infrastructure couldn’t keep up. Sensing a particularly juicy target, environmental activists at home and abroad have long reserved special scorn for the northern Alberta oil sands. One of my favourite measures of the advanced neurosis around Fort Mac is this: In 2012, at the height of the oil boom, Quebec’s public pension investment fund, the Caisse de Dépôt, had more than $5 billion invested in oil sands companies. That amount was nearly double the value of all Caisse investments in Quebec companies. This at a time when just about every political party ran ads in Quebec warning against les petroliers, the oilmen. At times it was hard to escape the conclusion that the region’s main export was irony.

So if a really big fire had forced the evacuation of Kelowna or Sudbury or Chicoutimi or Moncton, well, sure, the country and the world would have stood transfixed. The combined resources of every government would have been brought to bear. But surely there would have been less edge to it, less of an overwhelming urge to turn the tale into some kind of parable.

Let us deal, as unblushingly as we can, with the mythic elements of this mess. “I’m a firm believer climate change is hastening this change,” Christy Clark, the premier of British Columbia, told CTV. “Everything is tinder dry, snow packs are low, we’re not getting as much rain around the province and moisture around the province or the continent, and so we’re seeing a lot more fires.”

I picked Clark because it’s really easy to dismiss a bunch of Twitter cranks who see the Fort Mac fire as “karma” for oil sands exports, and not too hard to dismiss the Green party’s Elizabeth May, who quickly walked back a seemingly categorical declaration that the fire was connected to climate change, on similar grounds. Clark has more credibility. She’s had a report in hand since 2014 from the province’s Wildfire Management Branch predicting “an ever growing wildfire risk and threat to communities,” due precisely to climate change.

Related: Did climate change contribute to the Fort McMurray fire?

But even if you grant the possibility of a general link between climate change and wildfires, it doesn’t take you far. First, it does nothing to save lives, which was, properly, the first priority of everyone responding to the Fort McMurray fire. Second, it’s in the nature of statistics that you can’t draw specific conclusions from general trends. Would Fort Mac have burned if it were a ghost town reduced to irrelevance by 10 years of government decisions to get out of the oil sands business? Probably, for all you know.

Finally, even in the absence of life-or-death crisis on a vast scale, the proposed “remedies” to the “problem” of the oil sands that are traditionally pitched by members of the Fort McMurray Schadenfreude Club usually get it backward. If the residents of a city are largely employed in extracting a legal product in high demand elsewhere, it is perverse to ask them to stop extracting the product. The problem is the demand, not the supply. It is mighty rich for people who live in big cities to demand that their neighbours stop shipping them fuel. It’s like the fat guy in a restaurant demanding that the kitchen staff get gastric bypass surgery.

The least useful instinct in a crisis is the urge to point fingers. It doesn’t get more helpful when the crisis is past. The Canada that helps instead of blaming has been on brilliant display this month. Here’s hoping it sticks around.